Proving there’s no science like accidental science, Northwestern researchers looking for materials to facilitate ion exchange have discovered a “Venus... 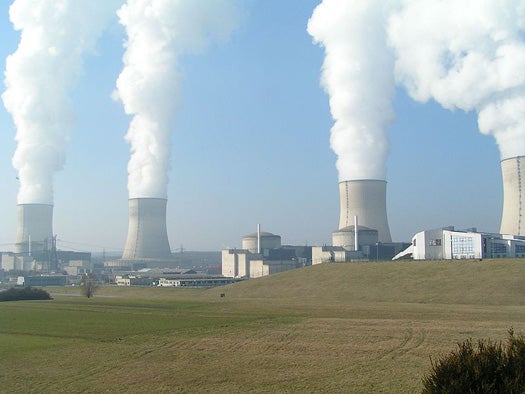 Northwestern researchers have found a material that filters the radioactive cesium ions out of nuclear waste. Stefan Kühn
SHARE

Proving there’s no science like accidental science, Northwestern researchers looking for materials to facilitate ion exchange have discovered a “Venus flytrap” for radioactive cesium that has the potential filter out 100 percent of the nasty stuff in nuclear waste. Made of gallium, sulfur and antimony compound, the synthetic material is highly selective in what it will seize, but in lab tests it snatched every single cesium ion from a sodium-rich solution designed to mimic the makeup of nuclear leftovers.

One reason radioactive nuclear waste is so difficult to clean up is the high ratio of sodium to cesium, which can reach 1,000:1. Picking out the radioactive ions in nuclear plant waste, for instance, would mean a good deal of water could be returned to the water cycle, and less storage space would be needed for nuclear waste materials. But filtering the cesium needles from a sodium haystack is beyond difficult.

The Northwestern material is a layered structure that creates many tiny pores or “windows.” As the liquid flows through, organic ions already in the material flow out and the big soft cesium ions — due to a natural attraction to the sulfer in the material — flow in. The two form a weak bond, which causes the material to change shape, closing the “window” and trapping the cesium in the material. The water-shrouded sodium molecules don’t trigger this response, passing right through the material and coming out cesium-free on the other side.

Just like that, the team suddenly had a breakthrough in nuclear waste remediation on their hands, significant not only because it can help reduce the volume of radioactive waste that needs storing, but because it can cut down on the vast volumes of water that get thrown out with nuclear waste. As a bonus, if the cesium can be harvested from the material, it might also be repurposed for other applications. Not bad for an accidental discovery.