Pentagon: we’ve been doing this since 2003 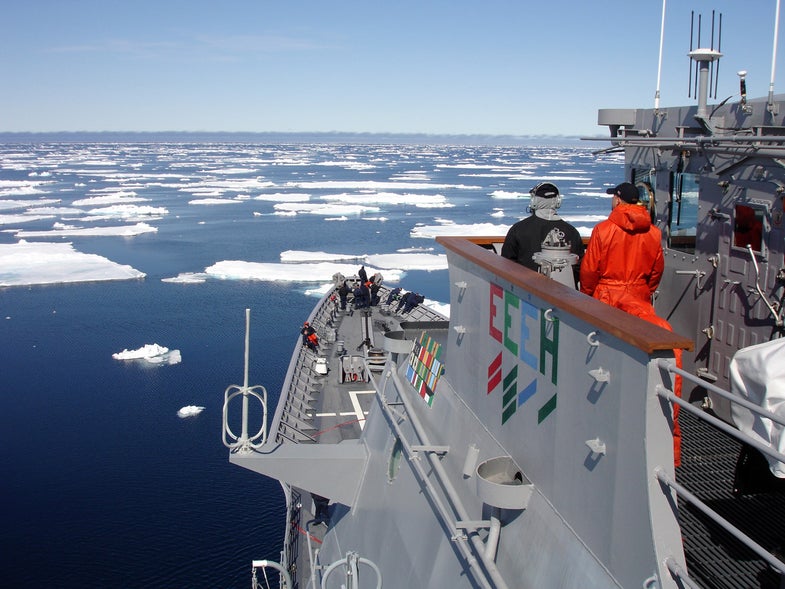 “Climate change poses a significant and growing threat to national security, both at home and abroad,” declared a memorandum from the White House to the heads of executive departments and agencies. With the United States about to enter its 15th year of fighting against the Taliban in Afghanistan, and with the fight against ISIS in Iraq spilling over into Syria more and more, it may seem odd for the President to direct resources towards a less direct threat. Does it really make sense for the United States military to spend resources on fighting climate change instead of defeating ISIS?

Yes. And not just yes, but the Pentagon’s been planning for climate change for years. Published in October 2003, just half-a-year after the United States invaded Iraq for the second time, “An Abrupt Climate Change Scenario and its Implications for United States National Security,” warned of new wars fought over dwindling resources as the climate changed. The study, commissioned by the Pentagon’s Office of Net Assessment, foreshadows a lot of the fears contained in the recent policy memorandum.

Compare this section from “An Abrupt Climate Change Scenario“

To this section from yesterday’s White House memorandum:

That 2003 report was just the first of many from the Pentagon about the dangers climate change poses to national security. The Center For Climate and Security has a full timeline of military interest in climate change; what follows are highlights from that timeline, specifically with a United States focus.

“These risks will require managing the divergent needs of massively increasing energy demand to maintain economic development and the need to tackle climate change,” read the 2008 National Defense Strategy of the United States.

The United States Navy, which of all the military branches faces the most risk from rising sea levels, formed a task force on Climate Change in 2009, and published a roadmap on climate change in 2010. From that roadmap:

In 2011, the U.S. Army Corps of Engineers wrote about the implications of sea-level change for civil works projects. Another report that year from the Defense Science Board looked at the security implications of climate change.

In 2012, Homeland Security released a report on climate change. So did the Office of the Director of National Intelligence, with a a report on Global Water Security for the State Department, noting that “During the next 10 years, many countries important to the United States will experience water problems—shortages, poor water quality, or floods—that will risk instability and state failure, increase regional tensions, and distract them from working with the United States on important U.S. policy objectives.” The study looked out as far ahead as 2040, and said simply, “Climate change will cause water shortages in many areas of the world.”

And that’s just the reports from the first term of George W. Bush’s through to the end of Barack Obama’s first term. The Climate and Security chronology includes at least 12 other reports in the past four years, and that’s leaving out anything from 2016.

What the new memorandum from the White House is doing is coordinating a lot of this previous work, and putting greater emphasis on climate security in the universe of security concerns. And it’s an instance where the Pentagon was already thinking about the implications of climate on security. Now there’s just a greater mandate to do so.