The nominee has extensive ties to fossil fuel companies 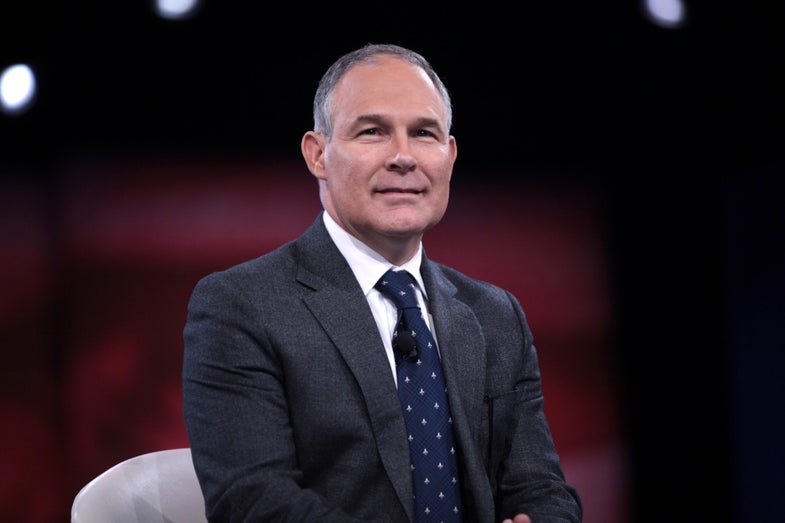 The current nominee to head the EPA. Also, someone who is currently suing the EPA. Gage Skidmore
SHARE

Scott Pruitt, currently the Oklahoma Attorney General, has been nominated by President-elect Trump to be the new head of the Environmental Protection Agency (EPA). Environmental groups have likened the decision to putting an arsonist in charge of the fire department or setting a fox loose in a henhouse.

Horror..Trump said to pick Scott Pruitt to head EPA, an agency he is suing as Oklahoma attorney general – The WashPo https://t.co/i6ZZo3NisN/

This reaction is largely due to the fact that Pruitt is an avowed opponent of the EPA. His official website explicitly says that he “is a leading advocate against the EPA’s activist agenda.”

Now, he’s tasked with leading an agency whose mission he not only disdains but that he has actively worked against professionally. Pruitt helped spearhead the lawsuit that stymied President Obama’s ambitious Clean Power Plan. The Clean Power Plan would have limited emissions from power plants across the country.

Pruitt also has extensive ties to the energy industry. A New York Times article in 2014 found that a letter sent by Pruitt to the EPA decrying regulations against the energy industry was drafted by lawyers representing an energy company. He has also received large amounts of financial support from energy companies for his re-election campaigns.

In a statement released by the Trump transition team, Pruitt is quoted as saying that: “The American people are tired of seeing billions of dollars drained from our economy due to unnecessary EPA regulations, and I intend to run this agency in a way that fosters both responsible protection of the environment and freedom for American businesses.”

That suggests a sharp departure from the climate-change-focused policies of his predecessors, Lisa Jackson and Gina McCarthy both of whom worked with President Obama to prepare for or mitigate the effects of climate change in the United States.

The appointment comes days after prominent climate activist and former Vice President Al Gore met with the President-elect and his daughter Ivanka Trump in New York. That meeting raised environmentalist hopes, only to have them snuffed out faster than your favorite Game of Thrones character.

Despite the false hope given by Gore’s visit to Trump Tower, the decision isn’t a huge surprise. Earlier, Trump named Myron Ebell, who does not believe in human-induced climate change, to head the EPA transition team. Trump has also declared his intent to defund NASA’s Earth Science research, which the President-elect feels is too politically partisan in nature––because its data contributes to the growing body of evidence in support of climate change. For him to name an EPA nominee who doubts the realities of global warming isn’t exactly a shocking turn of events. But it will be met with resistance.

Senator Bernie Sanders, a former presidential candidate who sits on the Environment and Public Works committee that will be tasked with approving Trump’s EPA nominee, issued a statement vowing to oppose the nomination. “At a time when climate change is the great environmental threat to the entire planet, it is sad and dangerous that Mr. Trump has nominated Scott Pruitt to lead the EPA. Mr. Pruitt’s record is not only that of being a climate change denier, but also someone who has worked closely with the fossil fuel industry to make this country more dependent, not less, on fossil fuels. The American people must demand leaders who are willing to transform our energy system away from fossil fuels. I will vigorously oppose this nomination,” Sanders wrote.

But with both the House and Senate controlled by Republicans, it’s unlikely that opposition to the nomination will be successful. The House of Representatives Committee on Science, Space, and Technology, which is tasked with overseeing the EPA, frequently tweets out misleading articles from dubious sources in opposition of climate change mitigation.

The only good news? Now there’s a new phrase for putting someone in charge of a group that they are ideologically opposed to, something that writers may have need of as Trump continues to fill the hundreds of appointments needed to create his administration. It’s not like releasing a wolf in a pigpen: It’s like putting Scott Pruitt in charge of the EPA.