What Research Compliance Committee would approve that? 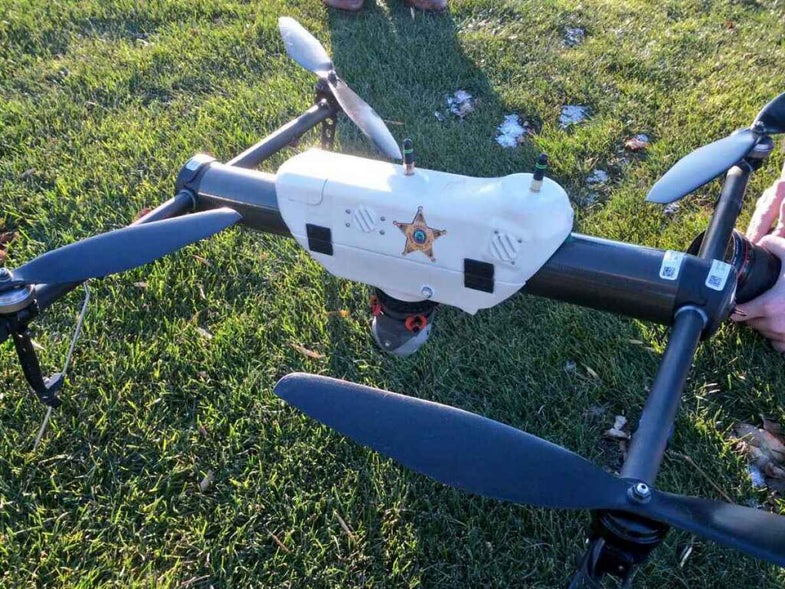 Judging by headlines flying around the internet, it’d be easy to think that North Dakota is a futuristic cyberpunk wild west, where deputized police robots shoot first and ask questions later. Stories like The Daily Beast‘s “First State Legalizes Taser Drones for Cops, Thanks to a Lobbyist,” The Verge‘s “Police in North Dakota can now use drones armed with tasers,” and Reason‘s “Watch Out for Drones with Pepper Spray in North Dakota” all allude to a dark, dismal world of legally-sanctioned robot assault. That’s especially strange, because since 2012, any drone use in North Dakota has had to go through an ethics review board at the University of North Dakota.

As I learned on a media trip to the Roughrider State in November of 2013, an Unmanned Aircraft Systems Research Compliance Committee oversees all drone use by both the University of North Dakota, and the Grand Forks County Sheriff’s Department, which operates drones as part of the Universities FAA exception. (The North Dakota Department of Commerce paid for my trip, as well as that of several other journalists.) In November of 2012, when the FAA granted a Certificate of Authorization for the Grand Forks County Sheriff’s Department to fly drones, it did so under the umbrella of the University of North Dakota’s existing drone exemption. The drones themselves are operated by a liaison with the University. Unusual in public safety matters, the police here are subordinate to the university.

When the University of North Dakota was granted an exemption to use drones for research, they took a very holistic view of that task. The Research Compliance Committee is modeled after other committees that adhere to federal guidelines for research on human subjects. From their charter:

Alan Frazier is an associate professor of the University of North Dakota, as well as a deputy sheriff in the Unmanned Aircraft Systems Unit of the Grand Forks County Sheriff’s Department. He is one of the 15 voting members of the UAS Research Compliance Committee, and has been with the Grand Forks drone unit since its start. By email, he shared the Sheriff’s written drone unit policy, noting that the unit policy itself prohibits “deployment of any type of projectile, chemical agent, or electrical current weapon,” from a Grand Forks Sheriff’s Department unmanned aerial system. That puts tasers, pepper spray, rubber bullets, and other non-lethal weapons outside the guidelines of acceptable police use.

Police guidelines, it’s worth noting, do not have the full effect of the law. But if the aim of North Dakota’s HB 1328 was to authorize and encourage the use of non-lethal weapons on drones, it seems an odd way to do it. The legislation primarily concerns rules regarding the use of drones for surveillance. Here it is, as part of the active legal code of North Dakota. Through Frazier, Popular Science obtained a copy of the mark-up of the bill from February, when it was being debated. The copy belonged to Rep. Rick Becker, HB 1328’s sponsor, and the handwritten notes come from Rep. Kim Koppelman. By the appearance of the notes, included below, it appears that the representatives considered removing the section governing use of force entirely, rather than keeping it in a bill about surveillance.

As it stands, the law prohibits the use of lethal weapons by drones, and current policies in the police force don’t support non-lethal weapons on drones. That is certainly subject to change, but it certainly doesn’t seem like North Dakota is about to start outfitting their quadcopters with tasers any time soon.