Their silk shines under UV light, giving their homes a rave-like appearance. 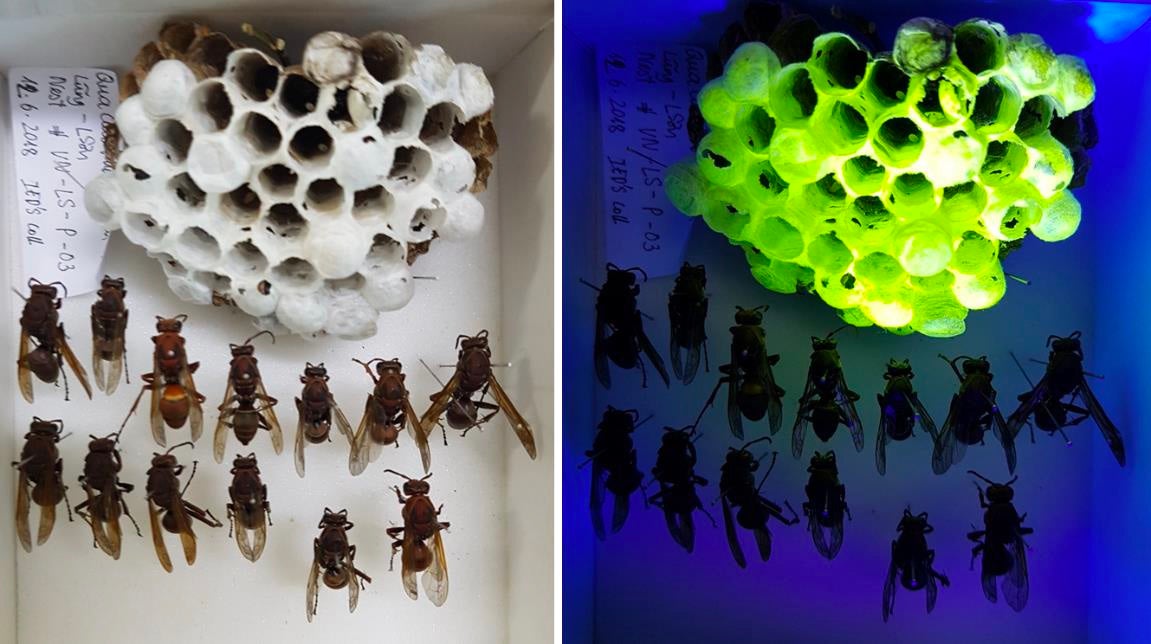 Under regular light (at left), a wasp nest appears a simple off-white. But under a blacklight (at right), the nest gives off an eerie glow. Scientists are unsure the function of the fluorescence. Schöllhorn, et al.
SHARE

If you come across the nest of a paper wasp colony and happen to have a blacklight handy, you may get the chance to see a green alien glow emanating from its hexagonal cells.

Paper wasps create a fine silk, most notably to wrap young wasp larvae in their cocoons for metamorphosis. But new research shows that inside those dainty strands are fluorescent proteins that become visible to humans under UV light. Paper wasps stitch this silk into their nests, giving their homes that same eerie glow, though the insects’ bodies themselves do not have that same fluorescence. The findings were published in the Journal of the Royal Society Interface.

While trekking through northern Vietnam, blacklight in hand, University of Paris chemist Bernd Schöllhorn spotted a strange yellow-green shape. He turned off his light, and the shape disappeared. Schöllhorn got closer and realized what he had discovered: the brilliant color of paper wasp hives normally invisible to us.

This finding was quite serendipitous. “We were not searching for wasp nests in particular,” Schöllhorn told Live Science. “To our knowledge, this phenomenon has not been observed in the past, neither by scientific researchers nor by any photographers.”

Schöllhorn and colleagues searched for paper wasps in other countries, finding nests from six species total, in other regions of Vietnam as well as in the Amazonian rainforest of French Guiana and in the south of France. Different species glowed slightly differently; the nests from the two species outside of Vietnam, for example, glowed more of a teal blue-green. But in the light of day, all paper wasp nests are a vaguely yellow off-white.

This fluorescence in wasp nests had never been documented before, so “finding this in so many species, and across three different continents, is remarkable,” Swanne Gordon, an evolutionary biologist at Washington University in St. Louis, who studies insect signaling and wasn’t involved in the study, told The Atlantic. But of course, with a new discovery comes many new questions.

While wasps are able to see Day-Glo wavelengths invisible to mere human eyes—they’re particularly sensitive to greens—it’s still unclear what purpose the fluorescence serves, if any. The highlighter hues may be a signal flare that guides the wasps home. Or, the slight variations in color might be a way for different colonies to differentiate their homes from their neighbors’. Fluorescence may also have protective qualities, like shielding paper wasp pupae from overexposure to the sun’s harmful UV rays.

There’s also the possibility that this fluorescence is merely a result of chance, the strange aftermath of coincidental biophysics. “It’s still possible this is just an incidental by-product of how the silk is made,” said University of Michigan paper wasp expert Liz Tibbetts, to The Atlantic.

The next steps are to determine the chemical structures in place that allow this silk to glow. Those insights might provide clues about its function, and how scientists might utilize this fluorescence for future tech or biomedical purposes.