A nationwide offensive seeks to save the country’s unique bird life. Now, one area is down to its last few varmints. 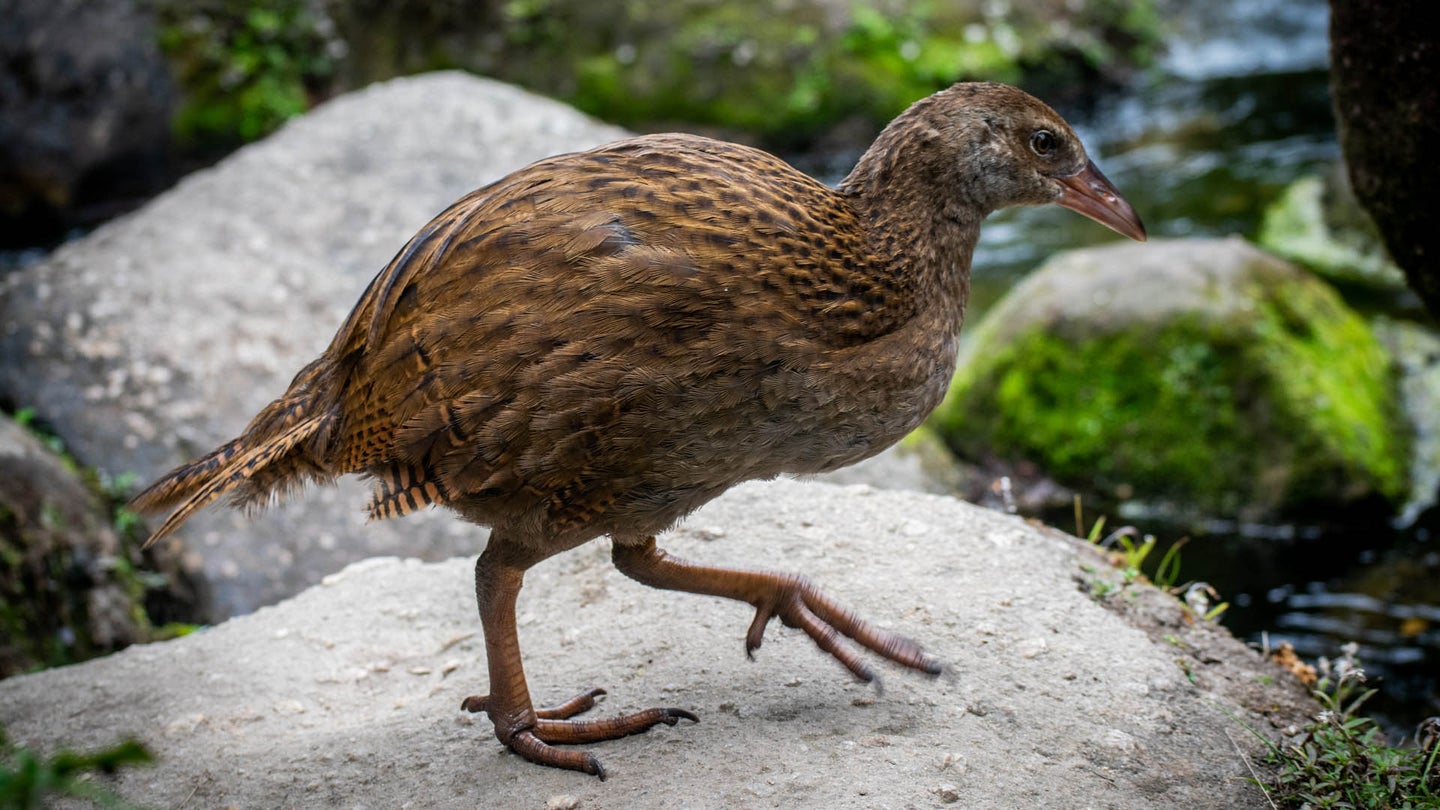 A weka, a flightless bird endemic to New Zealand that’s preyed on by invasive mammals and faces competition from other introduced species. Mara Johnson-Groh
SHARE

Mara Johnson-Groh is a science writer and photographer based on the West Coast whose work has appeared in Scientific American, NASA, Astronomy, Outside, Hakai, and other publications. This story originally featured on Undark.

The wide, sunny streets of Miramar, a suburb of Wellington, New Zealand, give the impression of a peaceful neighborhood. On a midsummer day earlier this year, the pohutukawa trees were abloom in a blaze of red, and kids on vacation zoomed about on scooters and skateboards. But in the backyards of these homes, business, and parks, Miramar is quietly at war.

Building traps, setting out poison, and keeping a guarded watch, Miramar is out to catch Wellington’s Most Wanted—every last rat, weasel, ferret, possum, and stoat that has invaded the city. They’re doing it to save the birds.

In a land where the only surviving native terrestrial mammal species are two thumb-sized bats, these invasive species have decimated native bird populations for centuries, causing dozens of extinctions of species found nowhere else on Earth. In 2015, New Zealand’s government launched a nationwide effort called Predator Free 2050 with a $17 million (28 million New Zealand dollars) investment to rid the country’s 164,375 square miles of invasive mammals in the next three decades. It’s an audacious goal: the next largest island to purge itself of predators is tiny South Georgia Island, which covers only 1,450 square miles.

Yet as time ticks by, New Zealand is losing treasured native species, millions of dollars in agricultural and economic losses, and part of their cultural identity. “There’s a whole bunch of things that are at stake—commercial, agricultural, disease, biodiversity, cultural,” says Angus Hulme-Moir, a senior community ranger with New Zealand’s Department of Conservation.

Miramar and its neighboring suburbs, located on a spit of land jutting like a fishhook out into the South Pacific, have become the frontline for testing and refining the urban eradication methods to be deployed countrywide. Wellington hopes to be the world’s first capital city without invasive predators within 10 years—a goal that started on the Miramar Peninsula, separated from the rest of the city by an isthmus less than a mile across.

A local organization spearheading the urban effort, Predator Free Wellington, launched their first organized offensive in Miramar in June 2019. Thanks to previous conservation efforts, Miramar had already been freed of possums, leaving only rats, stoats, and weasels on the peninsula. After the first six months, the peninsula, with almost 20,000 residents, has gotten rid of weasels and trapped tens of thousands of rats. Now, they’re on the hunt for the last ones.

Some 85 million years ago, the islands that would become New Zealand split off from the rest of the supercontinent of Gondwana and evolved in isolation with just a few native mammal species. Birds that previously kept to the trees to stay away from predators found safe haven on the ground, where some took up full-time residence and lost their ability to fly.

Over the millennia, many native curiosities appeared, including giant nocturnal parrots, moas—the only bird to completely lose its wings—and the kiwi, a long-beaked, thin-feathered flightless bird cherished by New Zealanders today.

But the fate of the flightless and ground-nesting birds was sealed with the arrival of the first explorers from Polynesia 700 to 800 years ago. These early settlers brought along their favorite foods like sweet potatoes and taro—but also the kiore, or Polynesian rat. The flightless and ground-nesting birds, who had known no enemy, made easy targets for both rats and new settlers. Within two centuries, moas were hunted to extinction.

When the Europeans arrived en masse in the 1800s, they inadvertently brought the larger Norway and ship rats. Later, they intentionally introduced more animals, including rabbits, which escaped and proliferated, upending the island’s delicate ecology. By 1880, rabbits were already recognized as an ecological plague and mustelids—a family of carnivorous mammals encompassing weasels, stoats, and ferrets among others—were introduced to control their population. Today, those mustelids have become an even greater scourge for local bird populations.

When the first explorers from Polynesia arrived, there were estimated to be 245 bird species, a quarter of which were flightless. Today the country is noticeably quieter. Over 20 percent of birds—encompassing at least 59 species—have gone extinct, while two-thirds of city animals are exotic.

This destruction, which occurred in just a few centuries, has reversed an ecosystem millions of years in the making. A 2019 report in Current Biology found that it would take 50 million years to recover the diversity of bird species lost since human colonization. And New Zealand stands to lose even more if the species that are currently threatened—roughly 30 percent of the remaining birds—go extinct. That is, if efforts like Predator Free Wellington are unsuccessful.

In the center of the peninsula, up a nondescript driveway, stands a one-story residential house that serves as the Miramar headquarters for Predator Free Wellington. It has been the base for the full-time crew who numbered 26 during the height of the campaign. This mustelid militia has become Miramar’s primary defense against predators.

In prior years, local community groups and individuals setting traps in their own backyards helped suppress predator populations, but they had been unable to wholly eliminate them. “None of that gets you to eradication,” says John Hambidge, project lead for the Miramar Peninsula program. “You have to do something that’s a whole complete step further. And that’s where we’ve started here.”

To raise awareness and secure permissions to place traps uniformly across the peninsula, Predator Free Wellington canvassed door-to-door in early 2019. Chew cards—baited tags that record identifying marks left by nibbling predators—and brochures were distributed at the local library and community center. Fliers were posted around town. These early steps made a huge difference, Hambidge says, in getting the community onboard. In a recent report, Predator Free Wellington noted that 99 percent of Miramar Peninsula residents were willing to participate in the project, and a recent survey found that 92 percent of Wellingtonians supported the citywide effort.

Today, in an orderly grid across Miramar, 1,800 traps are loaded at 328-foot intervals and small chew cards have been spaced every 164 feet. At around $60 apiece, the double-ended traps were carefully placed in order to cover as much ground as possible.

“The idea is that the average home range for a female rat is [164 feet],” Hambidge says. “That’s the best guess at this stage really.”

Local scientists, who study the movements of urban rats using VHF transmitters and GPS collars, have found the urban rats seem to occupy smaller territories than their brethren in forests, likely because access to food—in the form of compost piles and garbage bins—is more available.

The traps in Miramar are baited with brodifacoum—a low-level poison—and a variety of mustelid munchies. Rabbits culled from hunts organized by the regional and city councils supply the bait for weasels. For rats, the group mainly relies on peanut butter donated by a local manufacturer, but for trickier cases they turn to Nutella. “They love this stuff,” Hambidge says of rats’ affinity for the chocolate hazelnut spread.

Throughout the program, the group has dissected and documented the rats they’ve caught, which they store in a chest freezer jokingly referred to as the “freezer of death.” Their necropsies determine if a rat has previously ingested poison, which gives a sense of how far it may have traveled, or if it’s a lactating female, suggesting there are more rats to be caught.

“If you were to find a juvenile, that would be a concern, because you think there must be others around,” Hambidge says. “But if you just caught a big male rat, you wouldn’t be overly concerned about it.”

Particularly at this end stage, the program is highly dependent on locals keeping a lookout for rats. On one wall of the Miramar headquarters is a giant tactical map showing the locations of the traps and bait stations. Whenever a new killing or sighting is reported, Hambidge and his team make a note on the map, indicating where hotbeds of predatory activity remain. “It comes down to the community also being the eyes and ears,” Hambidge says.

Jen Rutherford, a Miramar resident, caught one of the peninsula’s remaining rats in January after months of empty traps. “I was surprised,” Rutherford says. “I was also excited to catch one, but a little sad that there were some still around.”

Across the city lies a 500-acre sanctuary enclosed by a 7-foot-high fence. Unlike a zoo, this 5.3-mile long fence exists to keep animals out. The sanctuary, now known as Zealandia, was declared pest free in 2000 after an intensive mammalian eradication effort. In the decades since, 18 native species, including flightless and ground-nesting birds vulnerable to invasive predators, have been released into the sanctuary.

With no overhead nets, the birds of Zealandia are free to come and go. Located so close to the city, the sanctuary’s exploding bird population has had a “halo effect” on Wellington. As larger tracts of the city become predator free, birds are moving out of the sanctuary and into backyards.

Tui, a blackbird-sized native bird, is one species that has had a notable comeback in the region, showing a 200 percent increase in reported sightings since 2011. Other species have seen similar growths: sightings of kereru, a large forest pigeon, rose 350 percent and kakariki, the red-crowned parakeet, tenfold in the past eight years.

The kaka, a large auburn parrot, is another Zealandia success story. “They are nesting both inside and outside the sanctuary now,” says Danielle Shanahan, director for Zealandia’s Center for People and Nature. “This is a species that was effectively extinct across the Wellington region.”

Zealandia has jumpstarted the growth in native bird populations in the Wellington region, but it will take continued predator-free efforts to make sure they can thrive beyond the sanctuary’s borders, where rats reign.

Back on the peninsula, Hambidge is tracking down the last rats of Miramar—the ones too fast or too smart to be caught easily. To hunt down these few dozen wily invaders, the group altered their strategy, becoming more focused. Instead of making weekly rounds to all of the traps, Hambidge and his team are now focusing on reported sightings and new kills.

“The sooner we can get there, the better, because, you know, rats can move on,” Hambidge says.

At the end of January, they estimated only a handful of ship rats remained at large. By March, Predator Free Wellington was closing in on just over 30 remaining sites of predator activity. But then, with the spread of COVID-19, New Zealand enacted a confinement program, restricting non-essential businesses and confining people to their homes. All field operations ceased, though a few exceptions were made, such as servicing the barrier along the isthmus to prevent re-invasions.

“Unfortunately, rats are not concerned with there being a lockdown or not, and this is a risk for us,” James Willcocks, Predator Free Wellington project director, says in an email. At the same time, he adds, “people have really stepped up to get involved throughout this lockdown period—we have had anecdotal reports of traps selling out at supermarkets as people clamber to get involved.”

Today, as the lockdown restrictions are easing, Predator Free Wellington is regaining momentum. The group hopes to hand over operations to the community at the end of June and move on to the next phase, using what they’ve learned to develop a plan for the rest of Wellington. The next section, extending inland from Miramar, is twice as large and much harder to protect against incursions. But residents and conservationists are hopeful.

Conservation “is a part of our DNA in New Zealand,” Shanahan says. “The Maori have this long history of taking extremely good care of the environment in New Zealand.”

“It’s taken us a while to circle back to that kaitiakitanga, that stewardship,” she continues, “but I think we’re getting there.”