Doctors wired them right into his nerves 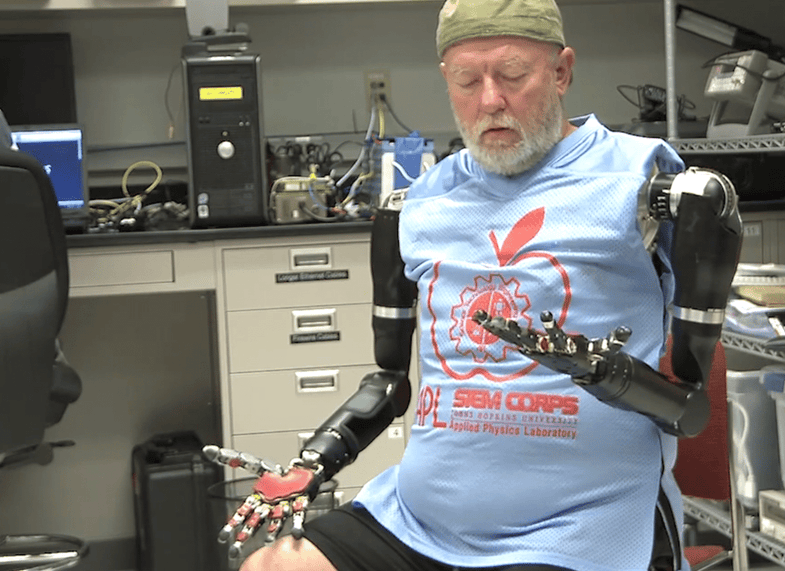 Until recently, losing both arms in an accident would probably have meant the end of a patient’s two-fisted grip. Not so for Leslie Baugh, the first shoulder-level double amputee to wear and control two complex, mind-controlled prosthetic limbs.

Baugh isn’t the first person to control robotic limbs with his mind. Some researchers are already working on giving amputee patients back their sense of touch. But the technique is new enough that dual-control has never been tried before.

In order to prepare his body for the devices, Baugh underwent a surgery called targeted muscle reinnervation. The procedure redirected nerves that once controlled his limbs to interact with the prosthetics.

Next, he trained on a computer, working with virtual models as pattern recognition software learned to apply signals from his brain to his intended movements. Then, Johns Hopkins researchers fitted him with a personalized socket to hold the prostheses to his body and translate his mental controls.

When they attached the robotic limbs, he performed a variety of two-handed tasks—becoming the first person to ever manipulate two independent arms with his mind at the same time.

In the future, according to John Hopkins, he’ll be able to take them home and use them in his day-to-day life.