Allowing doctors to check your vital signs from anywhere, no hospital visit required 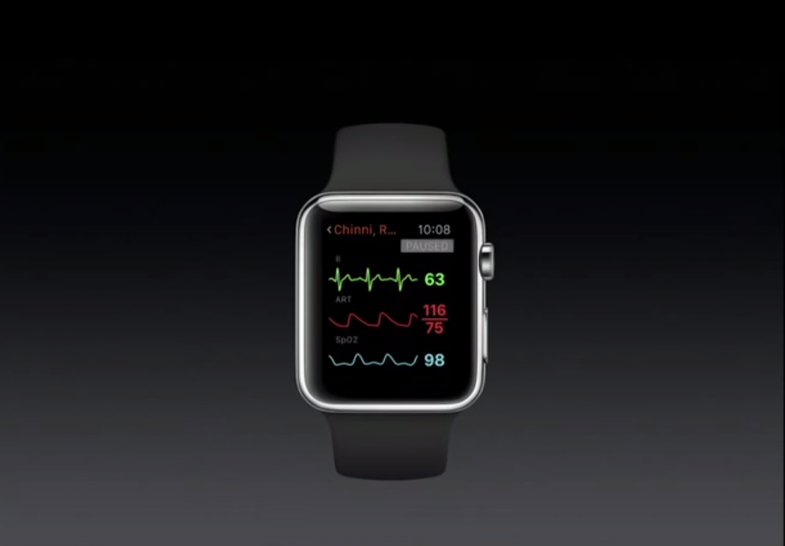 Apple is aiming to profoundly change the way doctors and patients interact. Last week, the company demonstrated one of its newest medical apps, called AirStrip, which allows doctors to read a patient’s heart rate and other acute health statistics. The app can now be used on the Apple Watch, allowing doctors to view a patient’s health information on the go, from their watch, anytime.

While the Apple Watch app is still new and in its early stages, its implications for the healthcare industry could be vast. The founders of the AirStrip company believe it could help doctors better monitor patients with chronic illnesses–such as heart disease, diabetes, and even COPD–from home. It could also increase the line of communication between doctors and patients, without having the patients make a trip to the hospital.

Apple clearly wants to not only break into the healthcare industry but also become a leader in the technology that could mobilize healthcare. But they aren’t quite there yet. While their app, HealthKit, allows users to track simple things like the number of steps they take or their sleeping habits, that app’s usership is small compared to the amount of people who see a doctor regularly to monitor a chronic health condition, and it likely targets only one health-conscious subset of the population. With AirStrip, Apple hopes to target an entirely different group–those who are chronically ill.

Doctors could view a patient’s health information on the go, from their watch, anytime.

Alan Portela, AirStrip’s CEO, envisions this technology as a sort of go-between to allow doctors to monitor their patients on a more regular basis than the routine follow-ups (which are often three or six months later) that many patients with chronic illnesses currently follow. Instead, doctors could monitor patients in real time, and find the individuals who are in need of immediate medical care.

“It is not just about displaying [the information] in real time. It is really about which clinical problem are we trying to solve,” Portela says.

AirStrip the company started in 2004 as a way to mobilize patient data within the hospital itself. Its first application, which was developed a decade ago, allowed doctors—from anywhere in the hospital—to monitor pregnant women while they were in labor. Quickly, they adapted that same mechanism to EKGs, which monitor patients’ heart rates to check for electrical problems with the heart. Then, in 2014, AirStrip acquired the company Sense4Baby, which connects baby monitors to wireless devices to periodically monitor the fetal heartbeat for women with high-risk pregnancies and send that data to their doctors’ mobile devices. Currently, at least 300 hospitals and 30,000 clinicians use AirStrip technology, allowing them to access patient information anywhere, in real time, from their mobile devices. Now, Apple hopes to move AirStrip farther out of the hospital with its new app for the Apple Watch.

The technology itself simply allows the information received from the medical devices to be transmitted from that machine to the Apple Watch, where it can be displayed in a simple and easy-to-use fashion. Given this, Portela says, the readings that the doctor receives are going to be as accurate as devices that are already approved by the FDA. During last week’s demonstration, Cameron Powell, AirStrip’s chief medical officer, also showed that AirStrip complies with HIPAA’s healthcare privacy laws by enforcing the users to authenticate themselves–similar to other doctor-to-patient messaging systems available now.

The app could find patients who are in need of immediate medical care.

In the near future, the company hopes to connect to a wider variety of medical devices, such as blood pressure cuffs and glucose monitoring devices (including ones now being developed to be placed directly on the skin). The ability to monitor this type of data in real time will not only help physicians better manage their patients with chronic diseases but will empower the patients themselves to take control of their health, Portela says.

Their next step is to connect the sensors and smart devices to analytics, which would better enable both patients and physicians to monitor disease progress. “Combining the data with analytics will help the doctors to be proactive and reactive,” Portela says. This feature may be available as soon as mid-2016.

AirStrip also wants to figure out how this system can be individualized for specific diseases. For example, Portela says, they are currently looking into COPD to understand what vital signs physicians need their patients to monitor at home to give the doctor a glimpse into the progress of the disease. This could also be the case for other chronic illnesses like Type 1 diabetes, which requires daily glucose monitoring. Analyzing this daily monitoring could give physicians a better understanding of that diabetic patient’s overall health.

Whether or not the AirStrip app for Apple Watch will become a success remains to be seen, but it will likely depend largely on the success of the Apple Watch (which is still an expensive item), and how receptive both patients and their physicians are to using this new technology. However, given the rapid increase in electronic medical records as well as the surge in the number of people who own these devices, Apple could have a standing chance at becoming a leader in healthcare technology.