The Ebola Vaccine Situation: A Cause For Hope 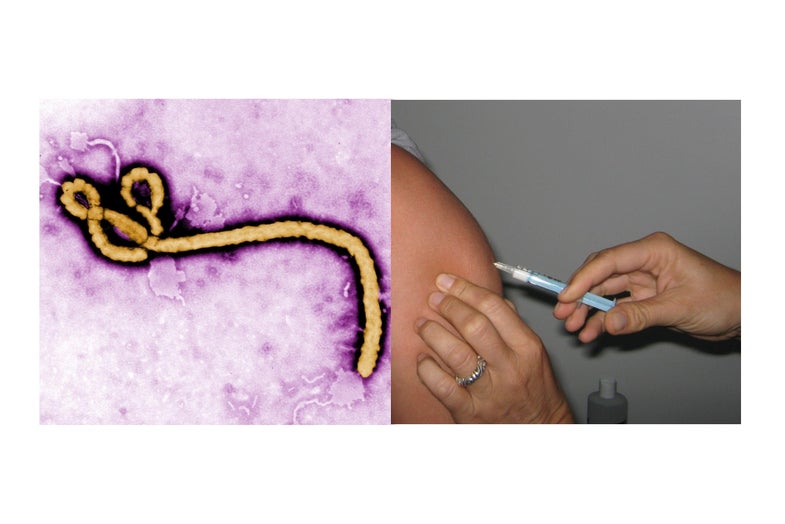 It’s been over a year since the Ebola epidemic began in West Africa. Over the months, there have been some highs but mostly lows. The virus has not only touched the affected nations, but led to concern abroad in countries including Spain, the United Kingdom and the United States. Though the majority of infections have been limited to Guinea, Sierra Leone and Liberia, the world has come to know the threat this dangerous virus presents to everyone.

Whenever an outbreak, epidemic or pandemic takes hold, public health officials turn to a variety of treatment options to halt morbidity and mortality. Antiviral therapies can at times offer benefit, particularly for influenza for which several are available commercially. For the more exotic or emerging viruses, experimental measures are explored. In the case of Ebola, a small number were attempted including blood transfusions, electrolyte supplementation, monoclonal antibodies such as ZMapp and genetic targeting to halt reproduction of the virus.

While these options may offer help to those already infected, for the rest of the population, the most relevant measures to halt an epidemic are preventative in nature. Most deal with human behavior, including hygiene, infection prevention and control for health care workers. In the case of the Ebola epidemic, other practices are also needed, such as proper care in public and at home as well as safe and dignified burial practices for those who sadly succumb to the infection.

Unfortunately, vaccine development for emerging infections is not an easy task. Although the concept of making vaccines on demand is ideal, the reality is far more complex and makes this option for the most part unfeasible. Consider influenza; several options are available annually for seasonal flu. In contrast, developing a shot against the more deadly avian strains has been significantly more difficult.

In the case of Ebola, research and development had been ongoing for years and formulations were tested both in the lab and in animal populations. All that remained were human trials to ensure safety, tolerance and of course, efficacy. Yet when the epidemic began, there was still no definitive timeline for clinical trials or eventual release.

That changed in summer of last year when the World Health Organization claimed fast-tracking testing was ethical in light of the epidemic. By the end of September, three candidates had paved the path to clinical trials, which began shortly thereafter. Their journeys, however, have been quite different.

For one candidate, known as VSV-ZEBOV, the road was paved with potholes. By the middle of December, the trial had to be halted due to adverse events, specifically joint pain in some of the volunteers. The trial resumed last month although results may be delayed for some time.

For another, known as MVA-BN-filo/Ad26.ZEBOV, entry into the process came late. Only in the last month did clinical trials gain approval and results may not come for another half year. Yet, based on results from other similarly-developed technologies, side effects should be minimal allowing for a rapid catch up.

The third and most promising to date is cAd3-EBO Z. This has gone through a rather smooth Phase I trial and the results are now available. Though the study only discusses safety and immunogenicity rather than efficacy against infection, the future appears to be bright.

Taking a closer look at the data from the trial, the safety of the candidate appears to be acceptable. Recorded adverse events include fatigue, localized pain, headache and fever. Most of these parallel adverse events encountered with most vaccines. Much like the VSV-ZEBOV trial, joint pain is experienced by a few participants but not considered to be significant. But the real promise comes from the response to Ebola itself.

Over the course of 180 days, samples were collected and tested in the lab for signs of Ebola recognition, known as immunogenicity. The levels of antibodies and immune cells known to target and kill the virus were up significantly after the injections. Moreover, the effect was maximized after one month post-vaccination. The numbers were lower than those observed in primate studies yet the authors suggested this could be compensated with a booster, similar to the MMR vaccine.

Based on the current study and what is expected from the other two candidates, the promise appears to be solidifying into reality. The goal may still be a few years away yet the achievements alone prove the future is bright. Moreover, the experience of this experimental journey into development signals what may be the beginning of a new era in infection prevention.

In the future, an identified potential threat may be recognized and rapid development of a vaccine can begin, preferably prior to an outbreak or epidemic. With this mechanism in place, we may be able to develop preventative measures before the tragic toll on life and health can even begin. Granted, this vision may be years away and appear to be incredibly optimistic. But in light of the tragedy of West Africa, it is without a doubt worth the effort.