Wearables can track your UV exposure, but preventing skin cancer isn’t so simple

Scientists still haven't figured out what a safe level of sun exposure is. 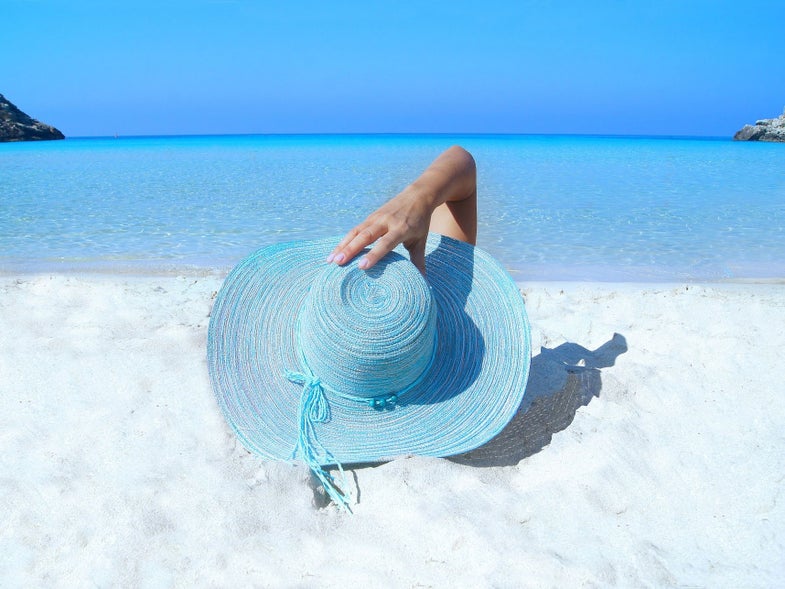 Can tech improve the way we think about the long-term health effects of sun exposure?. Pixabay
SHARE

The science is clear: UV exposure causes skin cancer. Still, according to the Skin Cancer Foundation, the rate of this malignancy is on the rise. Can technology change that? In the past few years, a wave of UV-detection wearables, apps, and stickers designed to alert users to dangerous levels of sun exposure have been making headlines. “Personal UV detection [devices] are finally being marketed to consumers,” says Elke Hacker, a researcher at the Improving Health Outcomes for People, part of Queensland University of Technology in Brisbane, Australia. She and other experts say that if they can accurately measure UV, they could have a big impact. But the big question is: Do they actually work? Most UV sensor wearables on the market today are designed to clip onto clothes or fit securely around the wrist. Whenever you step outside, they record the amount of UV rays your skin is getting, and via an app, they feed you that number as well as advice on whether it’s still safe for you to remain outside. As part of her research, Hacker is responsible for testing UV wearables and other technology that could improve the health of Australians, who have high rates of skin cancer. “UV monitors have been used in research studies for the past 20 years, but now these devices are out there to consumers.” And in the past few years, many of these devices have become increasingly high-tech. The L’Oreal-funded UV Sense, for example, made headlines earlier this year for the being a device so small that it can be applied on the fingernail. The majority of these wearables use a dosimeter, a device that measures exposure to ionizing radiation to calculate UV exposure. Ionizing radiation is a type that’s at a high enough radiation level that it can physically remove an electron from an atom. If it reaches human skin cells, this ability can damage DNA and make the chances of skin cancer higher. UVA and UVB are both ionizing, but UVB is far more so. That exposure data is then sent to an app, where users are asked what skin type they have and, depending on the wearable, if they have skin diseases. Both of these factors change how much sun you can get. People with lupus, an autoimmune disease, for example, are much more sensitive to UV exposure, sometimes breaking out in rashes.

But not all of them measure real-time UV exposure. Some, like the UV Patch, L’Oreal’s first iteration of a UV wearable, the Microsoft Band and Band 2, and Sunsprite, spot UV exposure by detecting visible light and then estimating the amount of UV based on that. While this method may give you an estimate of UV exposure, it’s not incredibly effective because it can’t accurately differentiate between UVA and UVB rays, says Jonathan Zippin, an associate professor of dermatology at Weill Cornell Medical Center in New York. That’s incredibly important because these rays have different impacts on the skin. For example, while both contribute to skin cancers, UVA rays are most responsible for aging and wrinkles, while UVB rays are most likely to cause burns, according to the Skin Cancer Foundation.

Zippin is on the medical advisory board for Shade, an inch-and-a-half-long wearable that attaches to users’ clothing, and has stock in the company. The Shade UV monitor came on the market in 2016.

For example, while UV Sense, which isn’t yet available to consumers, will only be able to measure UVA rays, Shade measures both, and, in calculations to determine how much sun is too much sun, gives more weight to UVB because it is more harmful to skin, Dumont says. It also measures UV light indoors.

Looking great @riotgrrrlquinn with your #wearshade UV sensor! THANK YOU for sharing ? learn more at ➡️➡️ wearshade.com ・・・ Having fun being RAD in our uv reactive hurley shirts. Her shoes un tied and she has a blister!! Haha new shoe problems. #wearshade,#shade,#lupus,#hurley,#hurleygirlies,#shark!

Then there are stickers and apps. By using UV-sensitive ink, stickers change color when they’re exposed to the sun. This basically only allows you to see when you’re exposed to UV so that you can reapply sunscreen or head indoors. On the other hand, stand-alone apps use more general information, like your location’s UV index and your skin color, to determine whether you’re safe. They don’t detect your personal UV exposure.

Do they reduce the rate of skin cancer?

There’s virtually no research into how effective these devices are yet. A large reason for that is because experts still haven’t come to a consensus on what a “safe” level of UV exposure is, if there is any at all.

Dermatologist Lauren Eckert Ploch cautions against relying on the devices to determine this amount of time. “I do not think that a UV dose sensor is helpful, as even minor doses of UV radiation are harmful to our skin. There’s no true ‘safe’ dose when we’re referring to UV radiation.”

But John Rogers, a materials scientist at Northwestern University who developed UV Sense, says doctors have established a baseline, contingent on skin color, for the amount of time before a sunburn occurs: About 10 minutes for a person with red hair and fair skin in Brisbane and longer the darker a person’s skin is, says Queensland’s Hacker. Though, Hacker and Rogers say, that burn-free time doesn’t keep a person free from UV damage.

The size and placement of the dosimeter on the wearable itself also affects UV detection accuracy. “All evidence shows us that UV wearables are not always going to be in the right place to detect UV completely accurately,” Hacker says. If you’ve clipped a wearable on the front of your shirt, for example, it might measure the amount of UV rays more accurately if you’re laying down compared to if you’re standing up and wearing a hat. Another factor: the lack of testing on their consistency; does one app give you the same amount of “sun-safe time” as another?

No one knows yet what the exact amount of UV exposure people can get without the risk of sun damage—not to mention the fact that sun damage is cumulative, and long-term sun exposure also carries a high risk for skin cancer.

But we might have a better answer soon. Several clinical trials are currently underway to figure this out. Rogers’ team will launch studies this December with a $2 million grant from the National Institutes of Health to study the UV Sense on patients who are at risk for melanoma. “We’ll be tracking UV exposure [both UVA and UVB rays] and understanding what works and what doesn’t,” he says. Based on feedback from the trials, the team could then improve UV Sense for consumers. But the bigger goal, says Rogers, is to see if the device will actually change behavior.

Emmanuel Dumont, who invented the Shade sensor while researching wearable UV tech at the Jacobs Technion-Cornell Institute in 2014, hopes his wearable will become the first to not only prove its efficacy in detecting UV but also to reduce skin cancer rates.

Shade has already published a paper in which it compared its accuracy to other wearables on the market—and found that it’s the most accurate and most sensitive out there—but its clinical trial will wrap up next February.

Hacker and her team began their clinical study in 2015 comparing a wearable called QSun to an app called SunSmart. “We were curious whether a device can know what that threshold is before you get burned,” she says. But more importantly, her team wanted to know whether a UV wearable would prompt people to change their behavior. The results will be published in the next few weeks, Hacker says.

This behavior change is what Ploch sees as the most plausible impact of these devices. “This has the potential to reduce skin cancer rates long-term as people realize that they need to apply sunscreen or wear sun protective clothing when they otherwise thought they were safe.”

Should you buy one?

Zippin likens these UV sensors to at-home blood glucose monitors or blood pressure monitors, which can serve as a guide to people who worry about their UV exposure.

In particular, people who already have skin cancer or a condition exacerbated by the sun may want a more precise method of calculating their daily activities, Zippin says. “For a lot of people, [UV exposure] is hard to wrap their head around,” he says. “And because sunlight isn’t easily measured, it’s a little hard for people to figure out how much sun is too much.”

These devices let us finally allow the public to do that, Zippin says. But he’s waiting on research that confirms they reduce the risk of skin cancer before recommending them to his patients.

Even now, though, Hacker is optimistic about the idea that tech can improve the way we think about sun exposure. “We all want to go outdoors and enjoy the sun,” she says. We just need to do it safely.