Got A Bacterial Infection? Maybe Don’t Blame The Spiders

We humans give spiders a hard time. Many of us unreasonably fear them, which may manifest in squishing, attempted burning,... 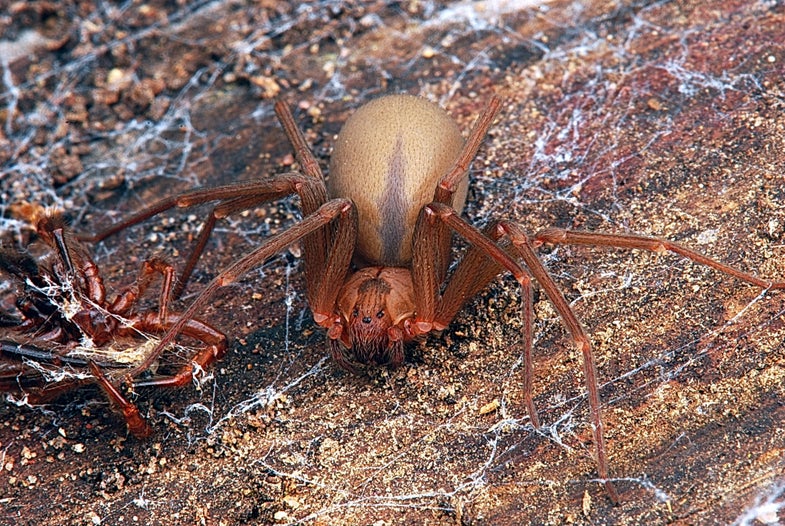 We humans give spiders a hard time. Many of us unreasonably fear them, which may manifest in squishing, attempted burning, and making really weird horror films (Ice spiders? Really?)

To top things off, doctors also likely falsely accuse spiders of a long list of medical ailments, from insect bites to infections to cancer. I’ve written about this before, mostly highlighting research from Richard Vetter, a retired research entomologist from the University of California, Riverside who has spent the past 20 years or so debunking spider myths.

“There are many statements in the medical literature involving spiders that are incorrect,” says Vetter. “Misdiagnosis of spider bites is important for variety of standpoints. If a doctor says it is a spider bite and it’s actually cancer, anthrax—some of these things can kill you. You’d be lucky to have a spider bite.”

This week, Vetter and colleagues published a letter to the journal Toxicon (paywall) that explores another common belief: that spider bites spread bacterial infections. The researchers dug through dozens of medical papers that collectively described more than 6,000 spider bite diagnoses to see if these were accompanied by bacterial infections. The vast majority were not. The researchers also point out that some spider venoms have antibacterial properties, and a couple have even been shown to inhibit the growth of Staphylococcus aureus, common in skin and respiratory infections.

This doesn’t necessarily prove that the bites weren’t associated with infections. After all, a lack of reports doesn’t mean they didn’t happen—it could just be poor recordkeeping, although this seems unlikely with so many cases. Further proof would require a tailored experiment that examined any bacterial growth for confirmed spider bites. Still, the new paper does call into question the wisdom in tying a specific skin infection to an unconfirmed spider bite.

So why does this matter? Although this is speculative, Vetter worries that when a doctor tells a patient that their bacterial infection was caused by a spider bite, the patient may unnecessarily overspray their home with pesticides or require psychological treatment to get over a fear of spiders. That might sound outlandish to anyone who hasn’t read up on the lengths some people will take to rid themselves of biting critters. But I buy it. In my research for my bed bug book, for example, I learned about a man in North Carolina who accidentally killed his ailing wife by over-applying insecticides and setting off too many bug bombs in their home, and a Canadian woman who killed herself, blaming a bed bug infestation in her suicide note. While a fear of most insects and arachnids may be irrational, it still can have horrible consequences.

“The fallout from a false diagnosis can cause some problems with delusions and psychological aspects,” says Vetter. “There is no reason to slap a causative agent on something if you really don’t know what’s causing it.”