Can We Build A Better (Fruit) Fly Trap 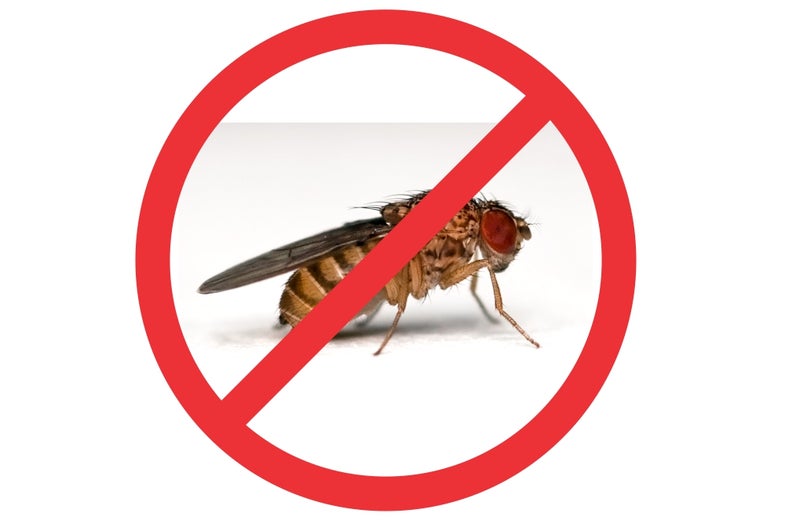 There’s nothing quite like that first bite of a fresh fruit. The range of aromas and flavors offer a momentary respite from everyday life and provide the body with a plethora of nutrients to improve overall health. But there is a dark side manifested in the presence of a number of speck-sized flying frustrations better known as fruit flies.

The fruit fly has been a part of the Earth for millions of years, and a scourge to human agriculture since its inception. There are over 5,000 different species worldwide, with some 1,400 choosing fleshy fruits as their home. Although they may be considered rather innocuous pests by most of us, they represent a significant economic burden to farmers, resulting in billions of dollars in losses. Close to home, research has revealed they can accumulate and spread pathogens such as the potentially deadly Escherichia coli O157:H7.

As a result of the annoyance as well as the potential for harm, the development of fruit fly traps has been a goal of researchers for over 100 years. The first tests were performed to determine the food sources necessary for survival. In 1917, the first traps focused on the use of a yeast-fermentation. This was expanded to include components of fruit in 1939 after scientists developed a more comprehensive nutritional analysis for the pest.

Although lab studies provided some perspective on one of the main components of any trap – the lure – further analysis of fly traps revealed there was much more to the picture. The actual choice of a host plant is not simply due to a matter of aroma. Instead, the attraction is based on a complex interaction of genetics, physiology and overall behavior.

In 1991, this was shown for a particular genus of fruit fly, Drosophila, in which two closely related species, D. sechellia and D. simulans had completely different host choices. The former selected only the noni plant while the latter chose bananas. To make the situation even more frustrating, breeding between the two species led to intermediate behaviors that could not be predicted.

In 2008, the difference in fruit fly food preference was linked to the insect’s genes. By looking at a number of different stimuli, including apples, strawberries, yeast, vinegar, and either fresh or rotten bananas or lemons, the change in fruit fly preference could be traced back to changes within the genetic profile of the flies themselves.

The mechanism behind this genetic diversity continued to be a mystery. Was it a matter of evolution or was there an environmental pressure involved? The question remained unanswered until this past year when a collection of three separate studies revealed the potential missing link: bacteria.

In February, the first study revealed how the levels of two particular genera of bacteria, Lactobacillus and Acetobacter changed the way flies fed. Both were involved in glucose metabolism to help regulate the levels in the blood. In addition, Acetobacter helped to regulate the levels of lipids such that there was no excess. The result was a lowered time for development of larvae and a healthier life moving forward.

In May, a study examined how the microbiota contributed to the overall expression of genes. As expected, changes in the microbial makeup led to differences both at the molecular and physiological level. What was even more interesting was that this was additive to geographic variation suggesting a shift in environment can mean a shift in both microbes and lifestyle. Should this shift become permanent, the fly’s behavior will also change including its food preference and possibly what it finds attractive.

Finally, last month, an American team of researchers examined the interactions between the fly and microbes in a relatively isolated geographical space: Hawaii. The team took a widespread look at how fruit flies co-existed with bacteria and yeasts to examine host shifts, symbioses and the extent of change. They found the incredible diversity of flies as due to the influence of microbes in every aspect of their lives from development to nutrition and even mate choices.

The results of this last study offered a rather gloomy picture for those wishing to develop the perfect fruit fly trap. The authors pointed to the transfer of genes from bacteria to the fly as a cause of permanent genetic changes. While the actual blueprint behind the development of these traits was not elucidated, the associations were strong enough to conclude there may never be a perfect way to attract all flies.

The information gained thus far has given us a better perspective on fruit fly diversity and a fantastic model for a greater understanding of overall terrestrial ecology. But finding that perfect trap has been elusive. If there is a ray of hope, it may be through the use of bacteria and/or their metabolites to increase the chances of attraction. The closest possible option is the identification of acetic acid as a quasi-universal stimulant. With some microbial maneuvering, perhaps a novel contraption using bacteria may one day be developed to help farmers financially as well as help us enjoy our own moments of fruit-filled joy without any need for swatting.