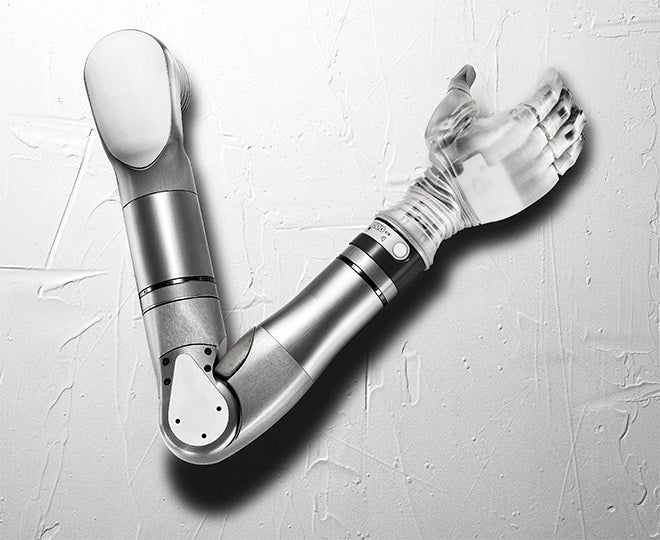 Even with today’s most advanced prosthetic limbs, amputees still struggle to perform certain basic tasks. But the bionic arm made by Deka, the R&D firm founded by inventor Dean Kamen, is nearly as dexterous as the real thing. Nicknamed for the cybernetic hand in Star Wars, the Luke Arm is the first prosthesis that allows a person to make multiple movements, such as rotating the wrist and opening the hand, at once.

“Ten minutes after putting it on, people are able to pick things up,” says Stewart Coulter, the Luke Arm project manager. “Our office is littered with things that people have built with it.” In a clinical trial, 90 percent of the 36 participants were able to do previously impossible tasks, such as unlocking a door or using chopsticks.

Electrodes on the skin near the attachment site pick up the electrical impulses signaling muscle contractions and send them to a computer in the prosthesis. The processor translates these messages into motion of the integrated elbow, wrist, and hand. Users coordinate complex movements with a joystick-like sensor on their shoe.

“It works the way the patient thinks,” says Chuck Hildreth Jr., who lost his arms in a work accident more than 30 years ago and has been testing the prototypes since 2008. The Food and Drug Administration (FDA) approved the arm in May. Deka hasn’t announced a date for its commercial release or a price, but when the Luke Arm hits the market, Hildreth says he’ll be first in line to buy one. 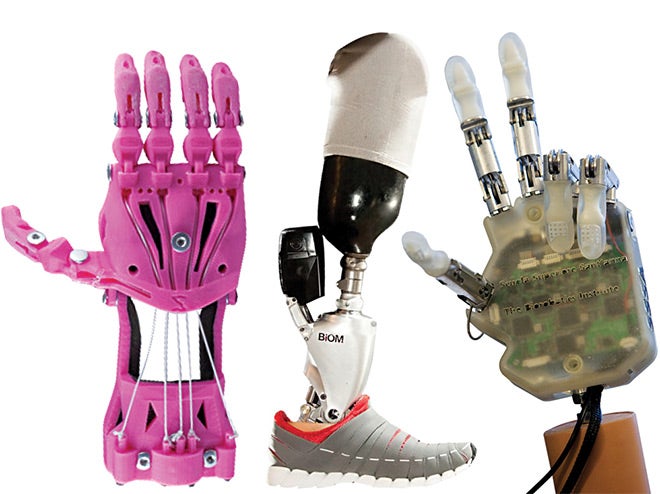 Welcome to The Matrix

The Bionics Revolution Has Begun

This year marked a turning point for bionic technologies. In March, a dancer who lost her leg in the Boston Marathon bombing returned to the stage on a prosthetic foot and ankle. In June, a paraplegic man made the World Cup’s opening kick using a mind-controlled exoskeleton. The FDA approved the first robotic exoskeleton for home use that same month. Here, we size up standout recent advances in restoring movement to those who’ve lost it.

IMES System / Illinois Institute of Technology
Implantable myoelectric sensors in muscles that allow a user to signal multiple movements at the same time with an artificial limb.

Neurobridge / Battelle
A brain chip that bypasses damaged nerves to stimulate the muscles of a paralyzed arm, hand, or fingers directly.

Luke Arm / Deka
A prosthetic limb controlled by electrodes at the attachment site and a joystick-like sensor on a user’s shoe.

Lifehand 2 / EPFL (Switzerland) and SSSA (Italy)
A robotic hand that gives a user a sense of touch and the ability to determine if an object is hard or soft, round or square.

ReWalk / ReWalk Robotics
A motorized exoskeleton that assists with movement at the hips, knees, and ankles to help paraplegics stand and walk.

Pulley-Based Tendon Transfer / Oregon State University
Surgically implanted pulleys that reattach tendons in the hand to undamaged muscles in the wrist to restore some mechanical function.

BiOM T2 System / BiOM
A battery-powered foot and ankle with an internal spring that compresses to absorb impact and releases to propel the foot.

The Cyborg Beast / E-nable
A 3-D–printed plastic hand, mechanically controlled by movement of the wrist or elbow, designed by an open-source community. 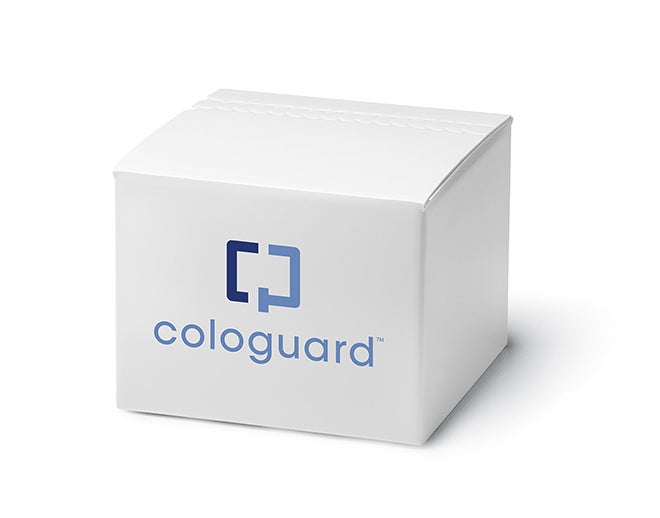 Colon cancer is the second deadliest cancer in the U.S. It’s also the most curable if caught early, but the prospect of a colonoscopy deters people from screening for it. The Cologuard test is far less invasive. It’s taken at home and mailed to a lab for DNA analysis. The test has a 92 percent accurate detection rate. “Our hope is a test like this could make colon cancer a rare disease,” says gastroenterologist David Ahlquist, co-inventor of Cologuard. $599 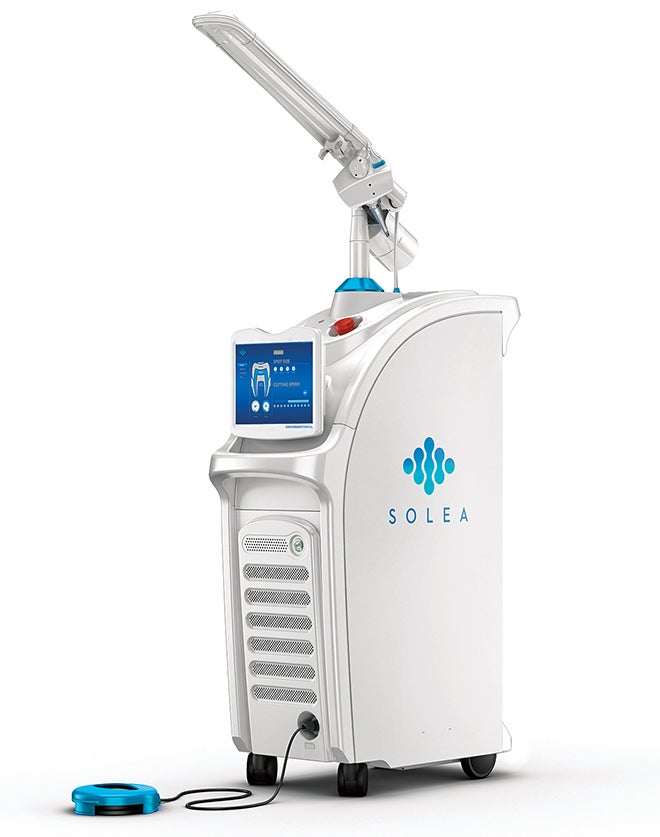 With all the high-pitched drilling, it’s no wonder people dread going to the dentist. The Solea carbon-dioxide laser offers a nearly silent alternative for root canals, crown fittings, and more. It works on teeth and gums and doesn’t cause bleeding or pain, even without anesthesia.

“In the time it would take to give an injection, wait for the patient to get numb, and start a procedure, I can be done with the laser,” says L. Don Wilson, one of the first dentists to adopt Solea. It was released in January after the FDA approved it.

Sunlight helps the brain regulate sleep cycles and mood hormones. It can even lift depression. The bad news is most people don’t get the recommended 30 minutes a day. SunSprite clips onto clothes to track exposure to bright light outdoors or near a window. “Beta testers were absolutely stunned by how little they were getting,” says Harvard Medical School psychiatrist Jacqueline Olds, who co-invented the solar-powered device. An app also alerts you if you’re absorbing too many damaging rays. $99 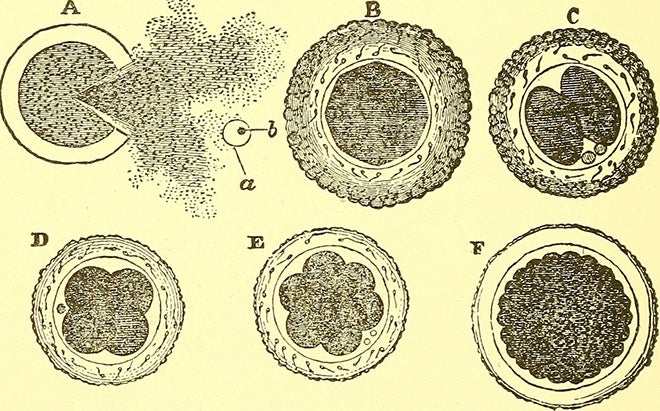 When a couple can’t conceive, in-vitro fertilization (IVF) may help. But the hefty price tag limits its use to rich countries; it also suggests growing an egg outside the womb requires high-tech equipment. The Walking Egg Lab achieves the right incubation pH and temperature with just a basic cooler containing vials of citric acid and bicarbonate, cutting the cost of IVF by a factor of five to ten. “It’s so easy nobody believes it,” says fertility specialist Willem Ombelet. He co-founded the Walking Egg nonprofit with embryologist Jonathan Van Blerkom, who initially came up with the method to transport cattle embryos. So far, 17 babies have been born in Belgium via this lab; trials are set for England and South Africa in coming months. $300 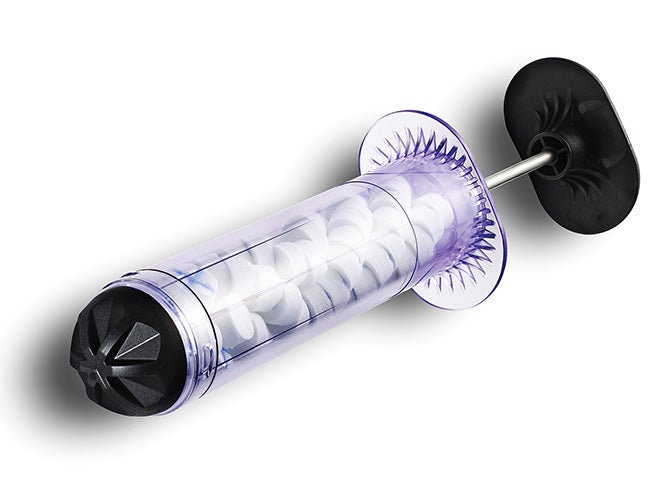 A quick fix for battle wounds

Nearly half of combat deaths since mid-World War II have been from bleeding out. RevMedx invented XStat to save future soldiers from the same fate. The 1.2-inch-diameter polycarbonate and silicone syringe contains fast-absorbing cellulose sponges coated in a material that helps clot blood. Once injected into a wound, the sponges swell in just 20 seconds to apply hemostatic pressure from within. This can stop bleeding for four hours—often long enough to get the patient to a hospital. And x-ray-detectable threads ensure that a surgeon can see and remove all the saturated sponges. 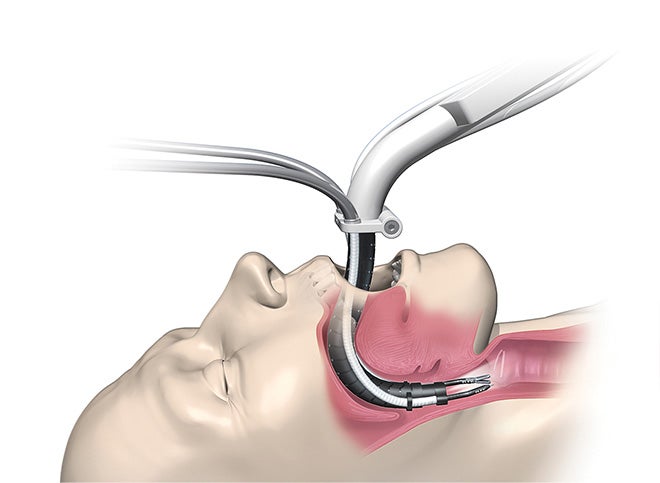 A bendable bot for simpler surgery

To do minimally invasive throat surgeries, doctors currently have to choose between a rigid laryngoscope, which requires a direct line of sight, and a flexible endoscope, which can buckle or go limp. Flex System combines the best of both. Motor-actuated cables enable a surgeon to direct the device down a patient’s throat without scraping it. A high-definition camera and interchangeable tools mounted at the tip make it possible to see, cut, and cauterize otherwise inaccessible spots. This means fewer painkillers, less tissue damage, and faster recovery times. It received European approval in March. 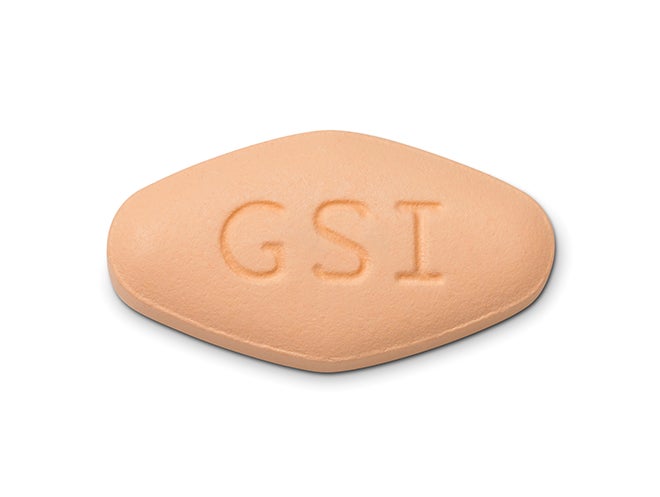 By wiping out its ability to replicate, Sovaldi can rid people of hepatitis C, a viral disease that afflicts 2.3 million Americans and can lead to liver failure. A regimen including the daily medication proved effective in more than 90 percent of clinical-trials subjects, without causing the often intolerable side effects of previous treatments. “It’s great to be able to tell patients, ‘Take this for 12 weeks and you may be cured,’ ” says John McHutchison, executive vice president of clinical research at Gilead Sciences, which received FDA approval for Sovaldi last December. In October, the FDA approved a combined therapy called Harvoni, which delivers Sovaldi and another virus-inhibiting drug in a single pill. 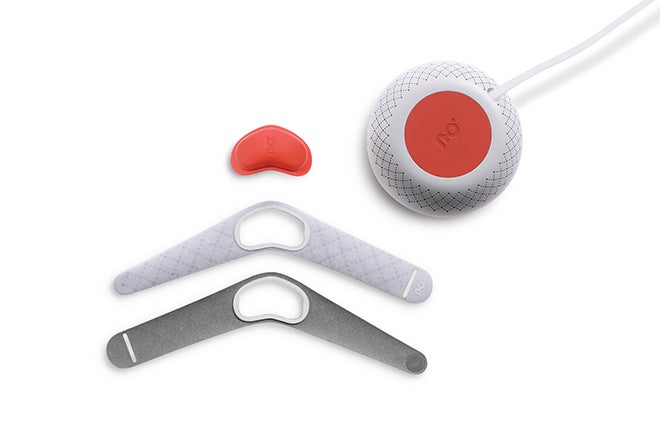 A baby monitor that tracks vitals

The Sproutling ankle band turns baby monitors into wearable tech, tracking heart rate, breathing, movement, and body position. An app alerts parents if something is awry. Company co-founder Mathew Spolin came up with the idea because his son liked to sleep facedown: “As soon as he flipped over, the device would’ve pushed right to my phone.” Sproutling learns babies’ behaviors, such as nap lengths, to help parents better plan. The charging station tracks light, noise, and temperature too. $249