A classic motorcycle-maker has unveiled its first electric ride

The TE-1 from Triumph has been in the works since 2019, and now we're getting some exciting stats on the new machine. 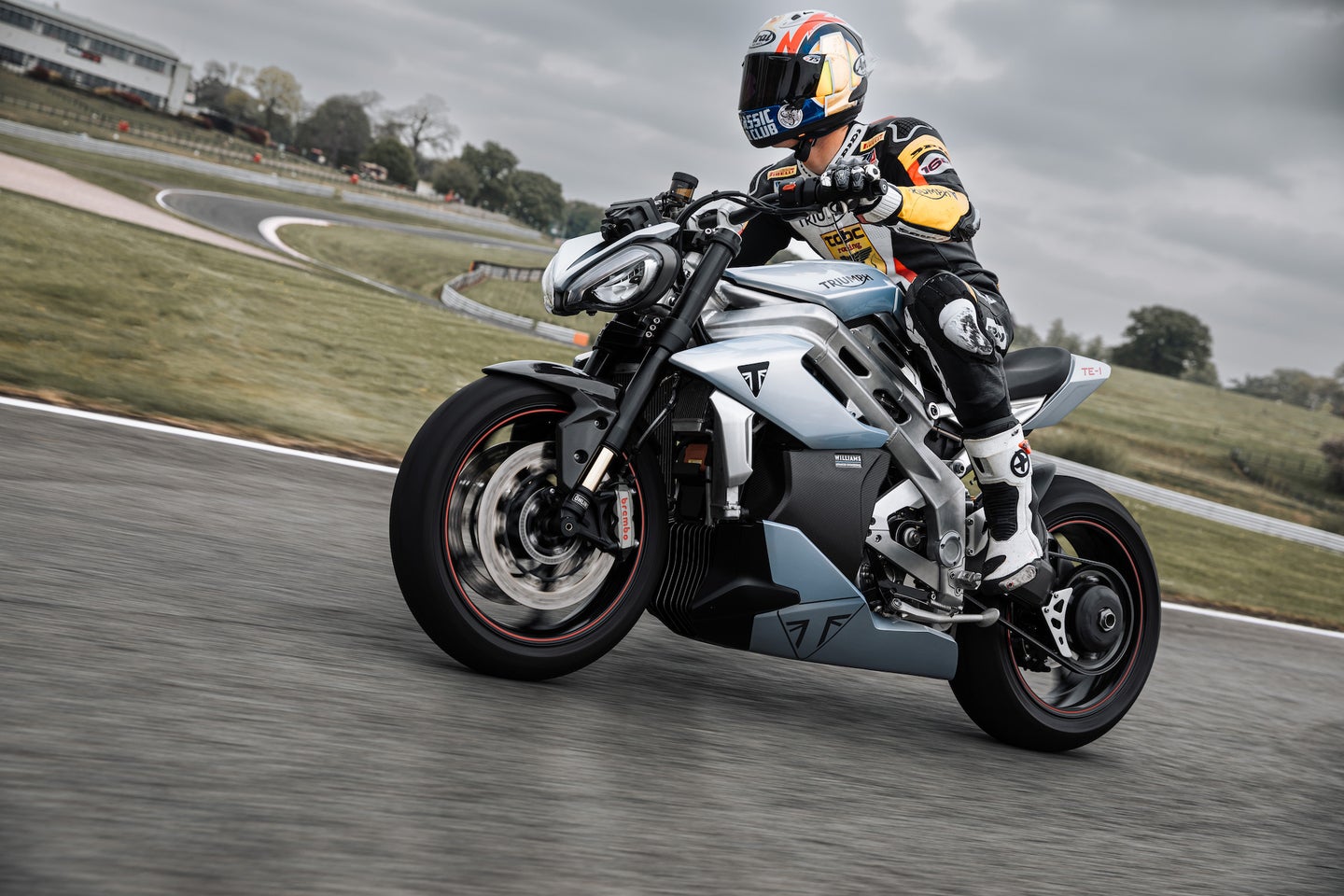 Triumph is a motorcycle brand best known for its old-world flair and vintage-inspired rides, like the Bonneville or the Thruxton. There’s good reason for that, because the company’s heyday occurred sometime around the 1960s, when Steve McQueen slung a leg over one in the 1963 epic The Great Escape. However, with the new all-electric TE-1, the company is leaving the past behind and zipping into the future with its first electric offering.

Not only does the new EV motorcycle build on Triumph’s streetfighter knowhow with its gas-burning Speed Triple lineup, which is similar in form to the TE-1, but based on the specs recently unveiled by the company, the TE-1 aims to completely blow every other electric motorcycle out of the water. Triumph’s upcoming electric whip will be perhaps the most advanced e-motorcycle to hit the asphalt, and other bikemakers are going to have a new target to aim for in the next decade.

Triumph first kicked off as a bicycle manufacturer in 1885. Company boss Moritz Schulte felt the need for speed back in 1898, when he strapped an engine to a bicycle. It began developing ground-up motorcycle designs in 1904, and by the end of the following year it had produced 250 examples. Over 100 years later, despite having gone through some lean years and a bankruptcy in 1983 leading to the sale of company assets, hundreds of thousands of Triumph-branded motorcycles have hit the streets all over the world.

[Related: How the stunt crew in ‘No Time to Die’ pulled off the film’s astounding motorcycle jump]

The electric motorcycle world isn’t nearly as crowded as the regular EV car and truck market right now, with Triumph essentially becoming only the third legacy motorcycle maker to dedicate resources to developing and delivering a ground-up electric machine, after Harley-Davidson and KTM. Harley launched its own electric streetfighter-style motorcycle in 2020’s LiveWire. That bike launched to near-universal praise, but little commercial success because of its high price. In 2022, that bike relaunched with a lower price as the One under Harley’s all-electric LiveWire sub-brand. KTM, meanwhile, went for the dirtbike segment with its Freeride E-XC.

These are the details to know about the TE-1: The electric motorcycle project has been in the works at the British bike builder since 2019, but before Triumph issued a release on the bike’s progress on July 12, information was scarce. Triumph is coming out of the gate swinging with a bike that is both more powerful and lighter than LiveWire’s One. The TE-1 will feature a 175-horsepower motor and be a featherweight (for an electric bike) 485 pounds. Triumph is being conservative with its advertised acceleration times: The TE-1 is stated to sprint from 0-60 in just 3.6 seconds, but that’s a few tenths slower than LiveWire’s 3 seconds dead.

Meanwhile, there are several electric-only motorcycle brands like Zero and Energica, which are sure to provide stiff competition to the traditional moto brands like Triumph. The TE-1 isn’t as quick or as fast as the ultra-aggressive Energica Ego, but it matches up fairly well against more standard sporty models like Zero’s SR/F. There’s no word yet on price for the Triumph, so we don’t yet know where it stacks up against marketplace competition, but based on these specs and what the EV bike market looks like today, it’s fair to expect the bike to be priced around $20,000.

[Related: This new electric motorcycle is built for long-range adventures]

As for range, Triumph claims the TE-1 will deliver 100 miles on a full charge, but doesn’t specify whether that number is city, highway, or a real-world mix. The LiveWire One has a claimed 146 miles of city range, and in real-world testing can deliver about 90 miles on the highway. Triumph hasn’t revealed the size of the TE-1’s battery, but based on the fact that it weighs less than the LiveWire, our guess is that it is smaller than that bike’s 12.5 kWh unit. Triumph claims the TE-1 can be charged from 0 to 80 percent in just 20 minutes, which is blazingly quick in today’s motorcycle market. The LiveWire, by comparison, takes around 40 minutes for the same charge, and the Zero SR/F—lacking a DC Fast charging port—takes more than double that.

Perhaps the best news, however, is that the TE-1 is apparently quite fun to ride. During a track test of the bike, Triumph rider Brandon Paasch had this to say about the experience: “The throttle response on the TE-1 is kind of incredible, it’s very torquey and when you first touch the throttle it’s instant power, which is obviously what I love as a motorcycle racer – I love when it’s super-torquey and picks up right away, so for me it was a really great experience. I got to peg this thing all the way from zero to 100% throttle and it’s unbelievably quick, it pulls like crazy.”

There’s no official timeline for when this bike will make production, or when you can expect to pick one up from your local dealer, but judging by how polished the machine looks already, it can’t be too far away—hopefully.