Putting some miles on Indian's most modern model. 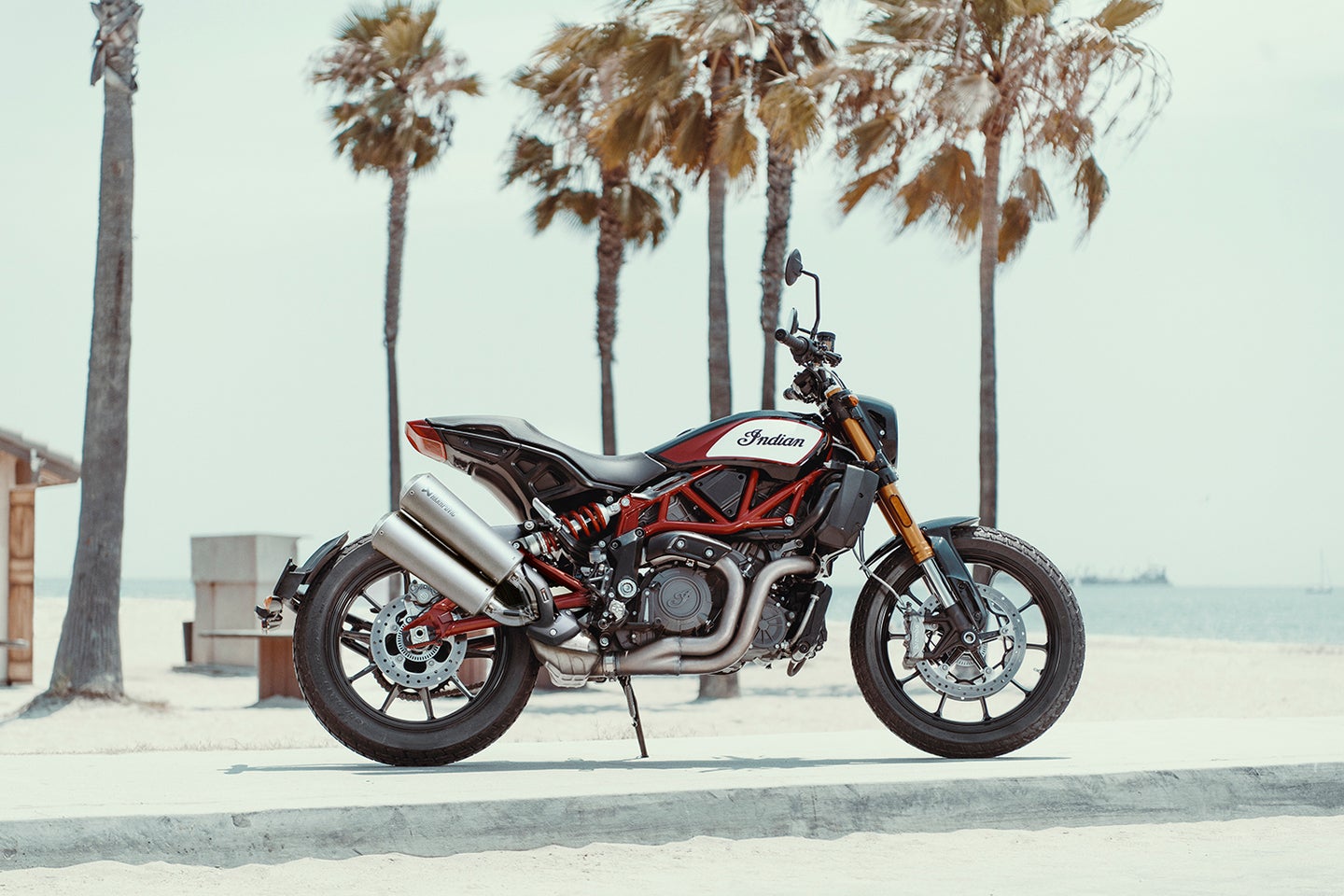 The Indian FTR 1200 S is a fantastically fun contemporary bike that is good enough to challenge European rivals and drag Indian from the past to the future. That might sound like a steep task for a single new model, but with the FTR, Indian Motorcycle shows how it aims to change its place in the world.

Revitalized by the brand’s acquisition by Polaris in 2011, Indian has understandably played to its strengths, starting with a line of traditional air-cooled big V-twin cruisers catering to wealthy traditionalists. Yes, the “investment bikers” who cosplay on motorcycles during their free time. Then Indian went after beginners with the affordable, lightweight Scout family of compact, water-cooled V-twin machines.

The FTR 1200 S is relentlessly comfortable and easy to ride despite its 120 horsepower and 85 lb.-ft. torque.

The clutch lever pull is light and it engages with the feedback needed to avoid embarrassing parking lot tip-overs. Spills from standing might be easier than expected with the FTR, however, because its flat track racing-inspired design has produced a seat as high as that of a knobby-tired dual-sport model with off-road pretensions. With a 32-inch inseam, I was left stretching my tip toes to the ground when stopped on the FTR. Anyone shorter would be left to try to flop to one side or the other.

The FTR’s transmission clicks into gear slick as a cocktail olive evading your toothpick. As easily as it snicks up and down through its range of six gears, it is the ability to intuitively hit Neutral when stopping that is its best feature in everyday riding. Where some bikes leaving you clunking the shifter back and forth between first and second gear, then releasing the clutch tentatively when the ‘N’ light glows because it doesn’t seem certain you’ve finally got it, the FTR feels like it slid into Neutral so positively that there’s barely need to double-check with the instrument panel to confirm.

This, along with the tractable, smooth power of the FTR’s 1,203 cc water-cooled 60-degree V-twin, make the 1200 S the most user-friendly bike I’ve ridden since the discontinued Triumph Sprint ST. But the FTR has a lot more power, style and charisma than the old Triumph sport tourer ever had, so its friendliness will never be misconstrued as blandness.

Instead, it is a true American sport bike, like Harley-Davidson’s Buell line was, but without the archaic engine, dubious styling and annoying rim-mounted front brake rotor that caused Buells to stand up when braking in corners.

In contrast, the FTR holds its line in turns no matter what is going on with the powerful, linear brakes. They provide a nice alternative to the grabbiness of Ducati brakes, which can be challenging to bleed just a touch of speed. It employs four-piston Brembo front calipers squeezing 320mm rotors in front and a two-piston rear Brembo with a 265mm rotor.

One puzzling unfriendly characteristic I noticed in my time on the FTR was its cold-start and idle problem. It would start right up, no problem. But then after idling for a little while, it would sometimes just stall for no reason. It did this only on cold starts, but “cold” in this situation means only that the bike hadn’t run yet that day; the ambient temperature was in the 70s. It never did this once the engine reached operating temperature.

There could be no doubt when this was achieved, because the placement of the radiator and the airflow through it cooks the rider, even in a warm climate. The radiator itself is no aesthetic triumph, and the exposed radiator cap jutting out on the right side is the worst aesthetic offender. Surely there are less clumsy alternatives to a radiator placement and design that neither flatters the otherwise handsome bike nor protects the rider from bathing in the heat it removes from the engine.

When cruising along the temperature is fine and life is good. It is an easy reach to the Texas longhorn-wide ProTaper handlebars that provide good leverage in turns and lend to the FTR’s flat track racing aesthetic. The footpegs are surprisingly high for a bike in this class, leaving the knees bent in the sportbike crouch even while the upper body is comfortably upright.

This points to the obvious possibility of mounting road race-style clip-on handlebars and replacing the 19-inch front and 18-inch rear wheels with 17-inch road race-sized wheels to create a sportier variant in the future.

Certainly the inverted 43mm cartridge fork, which is adjustable for preload, compression and rebound and the rear shock, which is also adjustable for those factors, seem plenty capable for serious back road corner carving. The FTR wears special flat track-inspired Dunlop DT3-R tires, which seem to work fine for a fashion-first tire design. But I’d love to ride this bike with some proper high-performance tires on it to see the difference, especially with 17-inch wheels.

The tested FTR 1200 S enjoys some hardware upgrades over the base 1200 model, including better suspension hardware and a 4.3-inch Ride Command LCD touchscreen display instrument panel in place of analog gauges. The distance-to-empty indicator on the display was especially helpful.

Our test bike also featured the optional Akrapovic slip-on mufflers, which provide a great exhaust tone without being excess volume.

The FTR test bike was painted to resemble Indian’s FTR 750 racebikes, which makes sense. The FTR 1200 S is a great-looking machine that attracts deserved compliments. But I found the retro-style Indian script lettering on the faux gas tank (it is really the airbox) out of step with the FTR’s contemporary mission. I realize that it is Indian’s logo, but modern lettering here would seem better-suited to the FTR’s purpose of expanding the brand’s appeal beyond the fringed leather chaps set.

The bill for all this FTR awesomeness comes to $16,999, which is right in line with the bike’s European rivals. It is nice to see such a modern, high-quality domestic challenger to the pantheon of established Europeans, so I hope the FTR 1200 S attracts the customers it deserves. I also look forward to seeing potential future variants, as Indian will surely expand from the two current versions to a whole family with the aforementioned clip-on handlebar sport bike or a high-exhaust scrambler model.

The FTR is by far my favorite Indian model and is absolutely on par with the likes of the Ducati Monster 1200 S for style and fun.