The best Harley bikes to buy for cheap

From Softails to Fat Boys, these are the six classic models to test out on the used market. 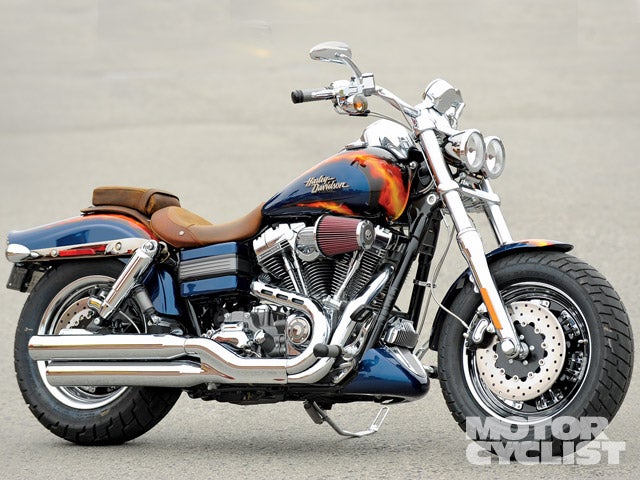 AKA the envy machine. Looking for performance, comfort, and style without breaking the bank? The CVO Fat Bob produced in 2009 and 2010 packs quite the punch, with an added dose of twin-shock CVO collectability. Harley-Davidson
SHARE

This story originally featured on Motorcyclist

The used market for Harley-Davidson can be strange, confusing, and oftentimes downright nonsensical. One model might be popular for a few years, sending its market price close to or above that of a brand-new motorcycle, and then drop back down to where it came from. Bikes costing $30,000-plus as new models can lose more than half their value after just a few years, while the $15,000 new bikes might only lose a couple thousand in value. That said, the used Harley market isn’t always random, and it certainly doesn’t have to be a crapshoot.

Unlike the used metric market which follows the more traditional and predictable automobile model, the depreciation percentage on Harleys differs across the varying model lines. Because of all the factors that go into the used Harley marketplace, this compilation of the five best used Harleys isn’t just a guide to the best deals or a list of the best Harleys ever made. It’s a starting point for someone looking to buy a used Harley and, with so many different options out there, might not know where to start. This list won’t tell you which Harley to buy, but hopefully it’ll help steer you in the right direction.

Sportsters have long been seen as the cheap, entry-level Harley-Davidson that can provide joy to new and experienced riders alike. Years ago, in order to keep the price point low, you had to find a run-down old Ironhead or choose from a handful of 1990s-era solid-mount five-speeds. That’s not the case anymore. Fairly new, fuel-injected and rubber-mounted Sportsters can now be found in the $3,000 and $4,000 range, not much more than the price of basketcase Ironheads. With the excellent range of bikes available since the late 2000s in both 883cc and 1,200cc trim, buyers can choose from the edgy Iron, Nightster, and 48, the classy Custom, or the sporty Low series to find a model that suits them best.

The 2007–2013 Sportsters are easy to work on (not that you should have to), have most of the same tech as the current models (minus the improved CAN bus electrical system), and differ very little from the current models in terms of style. Depending on the condition and mileage, any of the models listed above can be found for $4,500 to $6,500 and in many instances, they’ll be well-cared-for, low-mileage examples. Under 10,000 miles is common on these and most have less than 20,000. Steering as close to stock as possible on these is advised since budget-friendly bikes tend to have budget-friendly mods with budget-friendly installations.

It’s no secret Harley riders are demanding more than ever from their bikes in terms of power and handling. The pinnacle of the performance-oriented Big Twin came in 2016 when The Motor Company released the Dyna Low Rider S. The S sports a Screamin’ Eagle 110ci engine, upgraded suspension, brakes, tires, badass SoCal styling, and a sporty riding position. Only offered in 2016 and 2017, the Low Rider S gave enthusiasts in a stock package what they had been spending big money on with their Dynas. And the S has electronic cruise control, the only Dyna ever so equipped. The 2020 Low Rider S looks to capitalize on the 2017’s success.

Sure, the used prices on these twin-shock masterpieces is high, hovering awfully close to the bike’s original MSRP at $17,499, so it’s hardly a deal. But the bike’s near future collectability allows today’s buyers to pick up super low mileage examples and hold on to them. If the 110ci engine doesn’t seem quite so big anymore, H-D makes a hard-hitting 117ci kit for them to keep you running with the fastest bikes out there today, not to mention the seemingly endless supply of handling and ergonomics options available in the aftermarket.

Love the idea of a high-performance twin-shock Dyna but can’t stomach the cost of a Low Rider S? The CVO Fat Bob built in 2009 and 2010 has the same engine, lots of brakes, and decent suspension. Originally retailing for $25,299, the CVO Fat Bob has become a steal at the $10,000 to $12,000 range that it retails for now. Evan Kay of Motorcycle Cruiser said that the 114 pound-feet of torque was “to go! and to go in a hurry, rear tire squealing, engine racing, mothers covering their children’s eyes, and fathers looking at the ground in embarrassment at their shortcomings.”

To accompany that sort of power is the “in-your-face” styling and paint scheme. Nothing screams, let me lay this fat black line on the pavement, like a Yellow/Platinum gloss and blinding chrome. Whether or not the chrome CVO styling is for you is a personal choice, but the price range makes it a hell of a buy for the performance-minded cruiser rider.

For the rider looking for the classic Harley experience who’s also not afraid to get his hands dirty, an Evolution-era Softail (1984 to 1999) has it all. Evo Softails exude the ultimate badass look, sound, and feel that one imagines when riding a Harley. These sub-$5,000 used bikes are readily available, but they will usually require some level of maintenance or reconditioning.

The good news is that OEM parts are still easily available, but the aftermarket also provides massive support for them. Most custom bikes built even to this day use an Evo-type powertrain and Softail-style frame making true H-D Softails a wonderful basis for a custom build. You can get all the custom look you desire but with a Harley VIN which makes registration and insurance a piece of cake.

Values abound between the numerous models produced in that 15-year run, with specific models like the 1990 Fat Boy, 1993 Heritage Nostalgia “Moo Glide,” and Springers fetching higher prices than the others. If you can find one, the first-year 1984 model with kickstarter is still reasonably priced considering the cool factor it comes with.

Have you seen the sticker price lately on Harley’s flagship Touring models? Road Glide Limited and Ultra Limited both clock in at $28,000-plus, and although they’re great bikes, that price tag isn’t for everyone. So what’s the best way to get into a quality Touring model without breaking the bank? We must venture back to a time before in-fairing infotainment and single-handed saddlebag latches were made standard thanks to 2014′s Project Rushmore redesign.

Harley-Davidson had previously redesigned its Touring lineup in 2009 with a bigger, stronger frame, and more modern components. Varying paint schemes were available and things like electronic cruise control, 103-inch engine in later years, six-speed tranny, and ergonomic rider and passenger seating positions were all there. With the Rushmore redesign and then the release of the Milwaukee-Eight motor, the values on 2009 to 2013 baggers plummeted. But they were great long-haul bikes at the time, and they’re still great at it today!

Unlike Sportsters, which owners tend to put cheaper aftermarket products on, bagger owners aren’t usually afraid to spend money on quality parts and installation. $1,000-plus sound systems are not uncommon to find on these models nor are heavy-duty performance upgrades. Don’t let high miles scare you away, either. When maintained properly, 70,000 miles on the odometer means that the bike still has quite a bit of life left. Many times at that mileage level a top-end job or full motor replacement has already been done anyways. Keep an eye out for bikes with a 120R or 120ST motor dropped in at higher-mileage in lieu of rebuilding the stock motor.

Look at any Harley in dealership showrooms today. Which model looks closest to that first overhead-valve V-twin from 1936? You’re probably looking at a Heritage Classic. Its flowing, two-tone painted fenders, chrome trim, spoke wheels, and leather saddlebags look like something that was designed when Willie G. was an infant. Heritage Softail Classics are all-around good bikes, though not necessarily great at any one thing. They won’t perform like a Dyna, eat up miles like an Ultra Limited, or draw stares like some of its other Softail stablemates, and maybe that’s why they’re not quite as desirable in the current used Harley climate.

Heritage Softail Classics often appeal to buyers who want the quintessential Harley of their childhood dreams, can afford a brand-new one and don’t ride very much. By the time that Heritage is ready for its next owner, it still has low miles and has likely been serviced at its original dealer since new. It’s been regularly polished, never ridden in rain, and stored indoors on an H-D branded battery maintainer. The Heritage gets lost in the used market with buyers who favor the aforementioned Harley models, which has driven prices down on them recently to the point of other Softail models that cost much less originally.

Is the Heritage Softail Classic your kind of motorcycle? With a 96–103ci V-twin, original styling, six-speed transmission, cruise control on later models, ABS brakes, comfortable two-up capability, and plenty of storage for the medium-haul, if it’s not, it should be. The price point they’re sitting at today should just be the icing on the cake.