In a test on Sunday in Nevada, two people hit a speed of 107 mph. 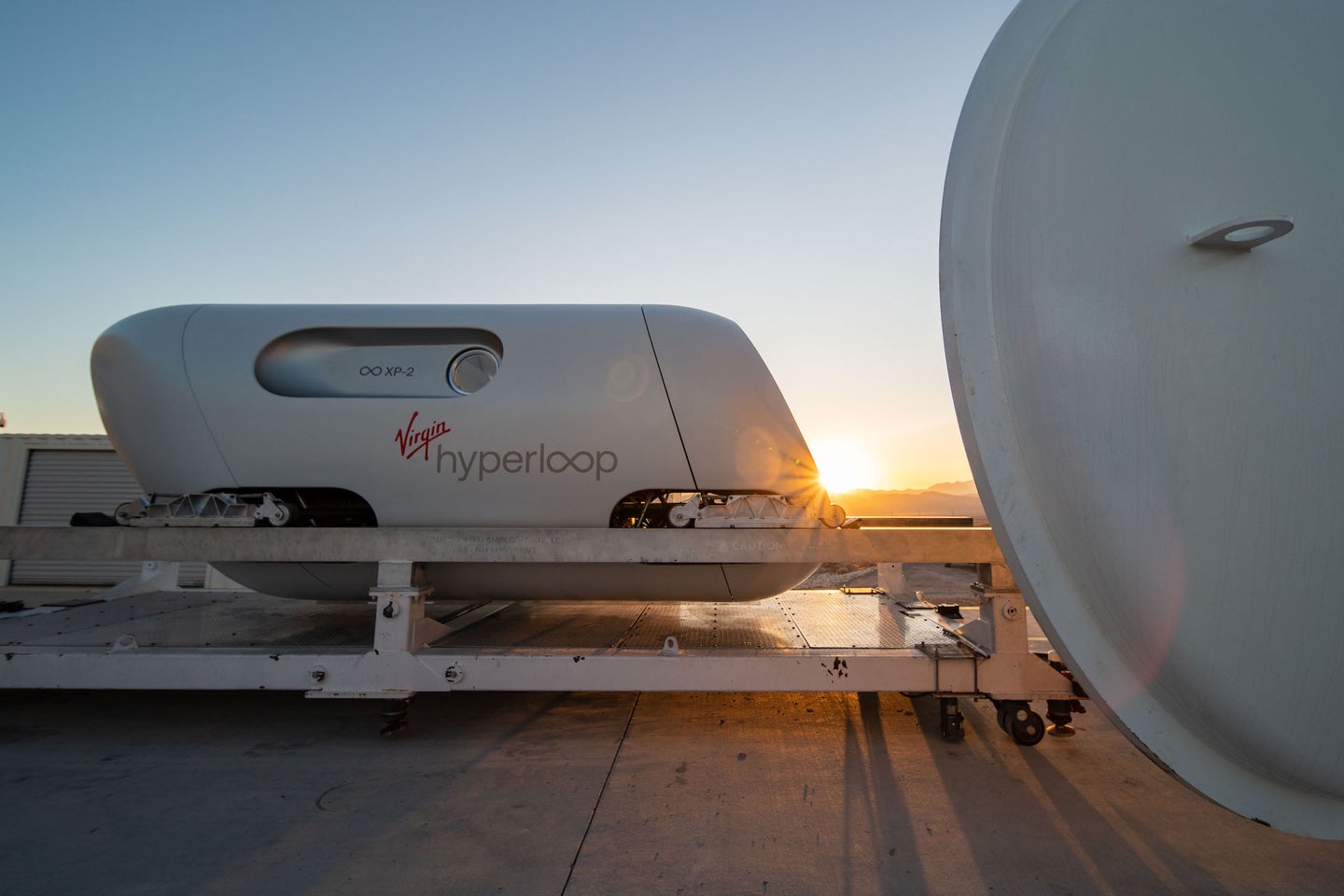 On Sunday, November 8, two people sat in a pod in a tube in Nevada and were quickly whisked a distance of about 1,300 feet. About 6 seconds into the test, the occupants hit a top speed of around 107 miles per hour. The entire trial lasted less than 16 seconds.

They were in a hyperloop—specifically, a 1,640-foot test track made by a company called Virgin Hyperloop. The term “hyperloop” may evoke Elon Musk, who wrote a 2013 white paper on the transportation technology idea in general; in it, he referred to a “tube over or under the ground that contains a special environment.” Today, Musk’s Boring Company is focused on tunnels, while multiple other firms are working on other hyperloop-type technologies. Virgin is just one of the players in the loop.

In this case, Virgin’s hyperloop contraption in Nevada involves an above-ground tube with a pod that zoomed through it. This week’s test was the first time that humans have ever done that—with these specific conditions. While the test track may look like a big white pipe from the outside, the inside is unique. In its operational state, the tube has the majority of the air removed from in it, making it similar to the pressure you’d find naturally at about 200,000 feet of altitude, says Josh Giegel, the CTO and cofounder of the company and one of the two first passengers to try it. When the test site is dormant, that tube can fill back up with air. The other initial guinea pig was Sara Luchian, the company’s director of passenger experience.

Because the tube is such a low-pressure environment, there’s less air resistance on the pod. “That allows you to go the speed of an aircraft, but really use very little energy consumption,” Giegel says. The pressurized pod is something like a wingless airplane, while the tube it’s in simulates a very high-altitude environment. The system is completely electric, while “magnetic forces,” Giegel explains, allow the pod to both levitate—it’s not cruising on wheels—and give it momentum.

The ultimate goal is to create “a new type of transportation,” Giegel says. It’s a type of fusion between an electric car, high-speed rail, and airplane. “You can view it as we’re building the airport, the airplane, the air traffic control, and the sky at the same time,” Giegel says.

In some ideal future, people could—perhaps—climb into a hyperloop pod and travel quickly over a long distance.

After Giegel and Luchian’s first ride, two more humans took a jaunt in the Virgin Hyperloop: Tanay Manjrekar and Anne Huynh, both employees of the company, whose test was on November 9.

The milestones are exciting, but any new technology that requires a massive new type of infrastructure—in this case, a tube that’s nearly a vacuum—is not going to propagate overnight, or ever, necessarily. Their aim, Giegel says, is to “build faster [and] cheaper than you can build high-speed rail.” He says they’d like to “automate as much building as we can.”

Transformative transportation projects rightly deserve skepticism, but Maynard Holliday, a senior engineer with the RAND Corporation, who has an expertise in robotics and transportation technologies like autonomous vehicles, is bullish on the future of hyperloop-type tech. In the next decade or two, he says he’s sure that hyperloops will exist between city pairs that are sensible to connect.

Giegel, for his part, rattles off Midwestern cities like Columbus, Pittsburgh, and Chicago as some of the areas of interest for his company.

Another aspect it has going for it, according to Holliday: “It’s a compilation of a lot of already mature technologies,” he says. A pod in a vacuum tube sounds scary, but how different is it from riding in an airplane at high altitude?

Holliday does have questions about the technology, though. Among them: the test track in Nevada has support beams beneath it. “If these tubes get out of alignment, that’s a potential catastrophic accident,” Holliday worries. An earthquake or even a “malicious actor” could cause damage to the pylons and attached tubes.

He also wonders about “equity issues”—who will be able to access a hyperloop, in terms of where the stops are located?

Still, he likes the idea, especially if it means that a commuter could live far from a city, but easily zoom back and forth and skip any traffic. “There’s a really positive vision that you could see there,” he says, “if you had a hyperloop network that allowed people to live much further from urban centers.”