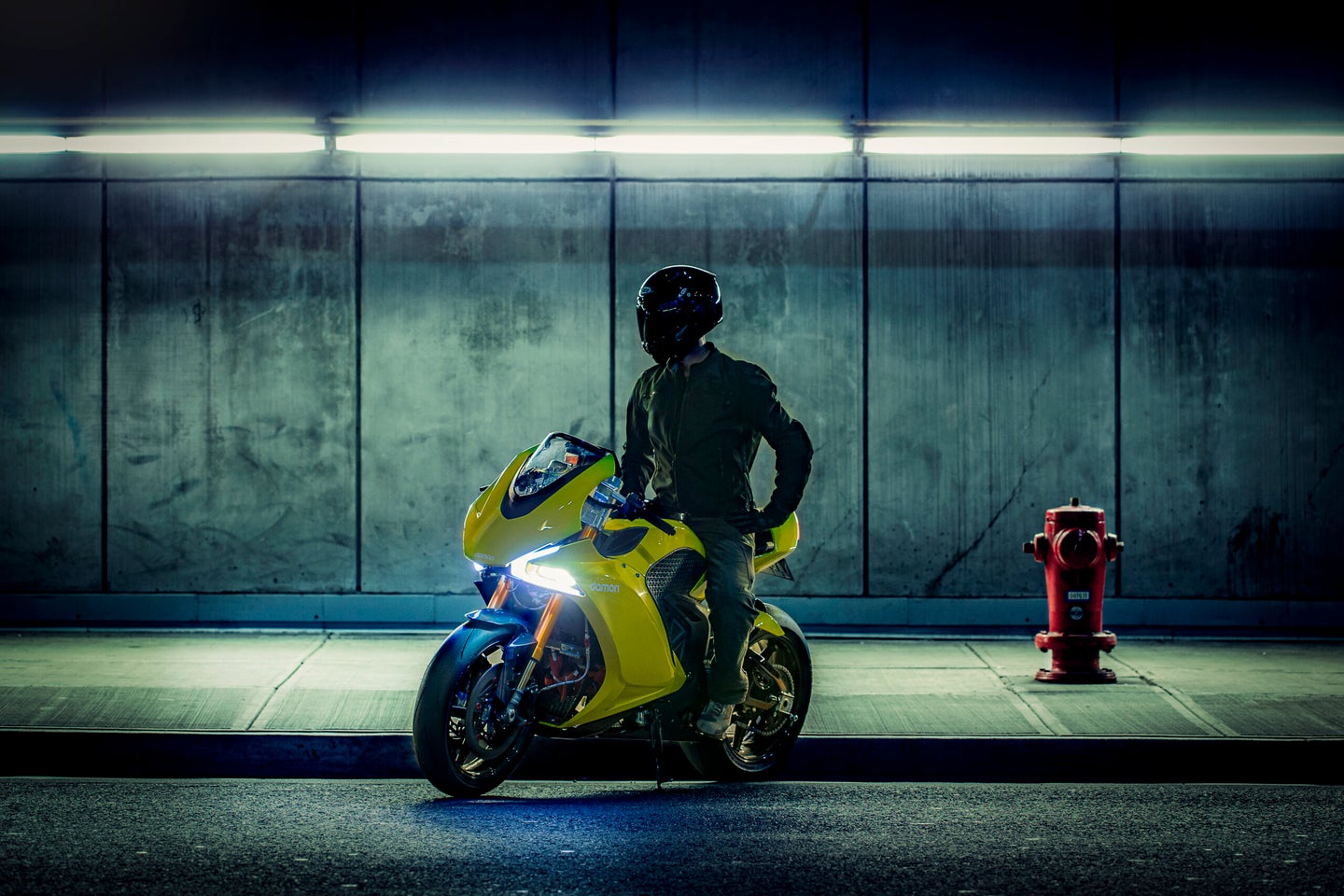 The Damon Hypersport is expected to ship next year. Rob Bubek
SHARE

While automakers have loaded their cars with increasingly sophisticated and effective safety technology in recent years, motorcycles—which are in more desperate need of a safety upgrade—have been left behind.

That was the observation of the founders of Damon Motorcycles, a startup out of Vancouver, Canada. They’ve resolved to address the shortcomings of current two-wheelers with the battery-electric Damon Hypersport, scheduled for delivery to riders in 2021. It is a no-excuses superbike that happens to be powered by a 200-horsepower electric motor and that boasts an array of rider-assistance sensors worthy of an F-35 fighter jet.

Damon is the dream of founders Kwong and Jay Giraud, who are serious motorcyclists with tech industry backgrounds; their chief operating officer was previously at the electric dirtbike company Alta Motors. They set out to develop safety technology to assist riders and then decided the only way to deliver that technology was to bake it into their own motorcycle.

“Motorcycles haven’t really changed in 100 years,” Kwong asserts. We can quibble with the hyperbole in that statement, but it is easy to see most of the fundamentals of today’s bikes in a motorcycle from 1920.

The problem is that while motorcyclists are menaced by oblivious drivers traveling in armored steel cages that are padded by air bags, riders have been left to rely on their eyes, ears, experience and reflexes to protect them.

The Damon Hypersport will supplement the human’s senses and skill with an accident warning system using cameras, radar, and artificial intelligence built on the bike. Damon calls the system CoPilot, and it uses 1080p cameras and front and rear 77 GHz radars to feed an onboard neural network that identifies potential threats.

This represents a fundamental change in philosophy from existing motorcycle safety systems such as anti-lock brakes and traction control, Kwong asserts. “ABS and traction control are reactive systems,” he said. “That’s already happened. We’re providing information to the rider so they can avoid the accident.”

The information from the computer does the rider no good if they don’t understand the meaning of the warnings in the split-second they may have to react, so Damon employs interfaces that it considers unmistakable.

The Hypersport has a row of LEDs on the trailing edge of its windscreen, where they are in the rider’s plain view. A center section of red LEDs will flash for collision alerts, while amber LEDs to the left and right sides provide blind spot warning. Motorcycles in general and sport bikes in particular have terrible blind spots in the rear-view mirrors, which typically provide a good view mainly of the rider’s elbows.

But a display screen in the Hypersport’s instrument panel shows the wide-angle view of the rear camera, without any elbows in the way, and the bike’s handlebars will vibrate with haptic feedback if the computer thinks a collision is imminent, literally shaking the rider to pay attention.

“These are very simple cues,” Kwong says. “I want the rider not to have to think about what is going on.”

The Hypersport, on the other hand, is paying close attention—not only to other vehicles nearby, but also to the rider, using sensors in the seat to know the rider’s position and force sensors in the hand grips to gauge how tightly the rider is squeezing.

“These can give me an idea how the rider is feeling,” Kwong explains, as a death grip indicates anxiety and interferes with the bike’s handling. A rider sliding smoothly from side-to-side in the saddle as the bike slices through corners, on the other hand, demonstrates comfort and proficiency.

This knowledge lets the Hypersport adjust the response to the twist-grip accelerator and its use of traction control based on its estimate of the rider’s comfort and skill level.

The Hypersport’s Shift system also can help the rider with comfort: it allows the handlebars, windscreen, seat and footpegs to adjust and change position. This lets the bike shift between full-on track-ready positions and more relaxed commuting-to-work positions, as well as making the bike configurable to suit riders of different sizes.

Shift uses power adjusters like the electric servos in your car’s power seats to move all the Hypersport’s controls to the rider’s preferred positions. “The subtly of the adjustment is so fine that it allows the rider to get the comfort they need on the fly,” said Kwong.

With all of these electronics, it is easy to overlook the Hypersport’s electric drivetrain. The 200-horsepower electric motor rockets the Hypersport to 60 mph in less than 3.0 seconds and to a top speed of 200 mph. The 21.5 kilowatt-hour lithium-ion battery pack (about the same size as the battery in the original Nissan Leaf) provides 200 miles of highway riding range at a steady 60 mph. At a more realistic 70 mph, range drops to 160 miles on the open road, but around town, regenerative braking recovers enough juice to bump range to 300 miles.

Even with a battery pack that is huge by motorcycle standards (the Harley-Davidson LiveWire has a 15.5 kWh pack), Damon claims that the Hypersport weighs only 440 lbs., which if true, is a coup. The Livewire weighs more than 100 pounds more than that with a smaller battery.

And for comparison, Zero Motorcycles, from Northern California, makes electric motorcycles like the Zero SR (which we tested) and that weighs 313 pounds and costs $15,495. But as nice as the SR is, it lacks the predicted performance and the safety technologies of the Hypersport.

Pricing for the standard Hypersport HS starts at $24,995. The Premier launch edition of the Hypersport is sold out, and is equipped with primo hardware such as Ohlins suspension components, Brembo brakes, and a carbon fiber single-sided rear swingarm. The suppliers of the standard bike’s components are still being determined, Kwong says.

And if you’re wondering what “Damon” refers to, that’s the first name of the company co-founder, Jay Girard.