Years of design, engineering, and testing have produced some very fancy kicks. Here's a look at a few neat pairs. 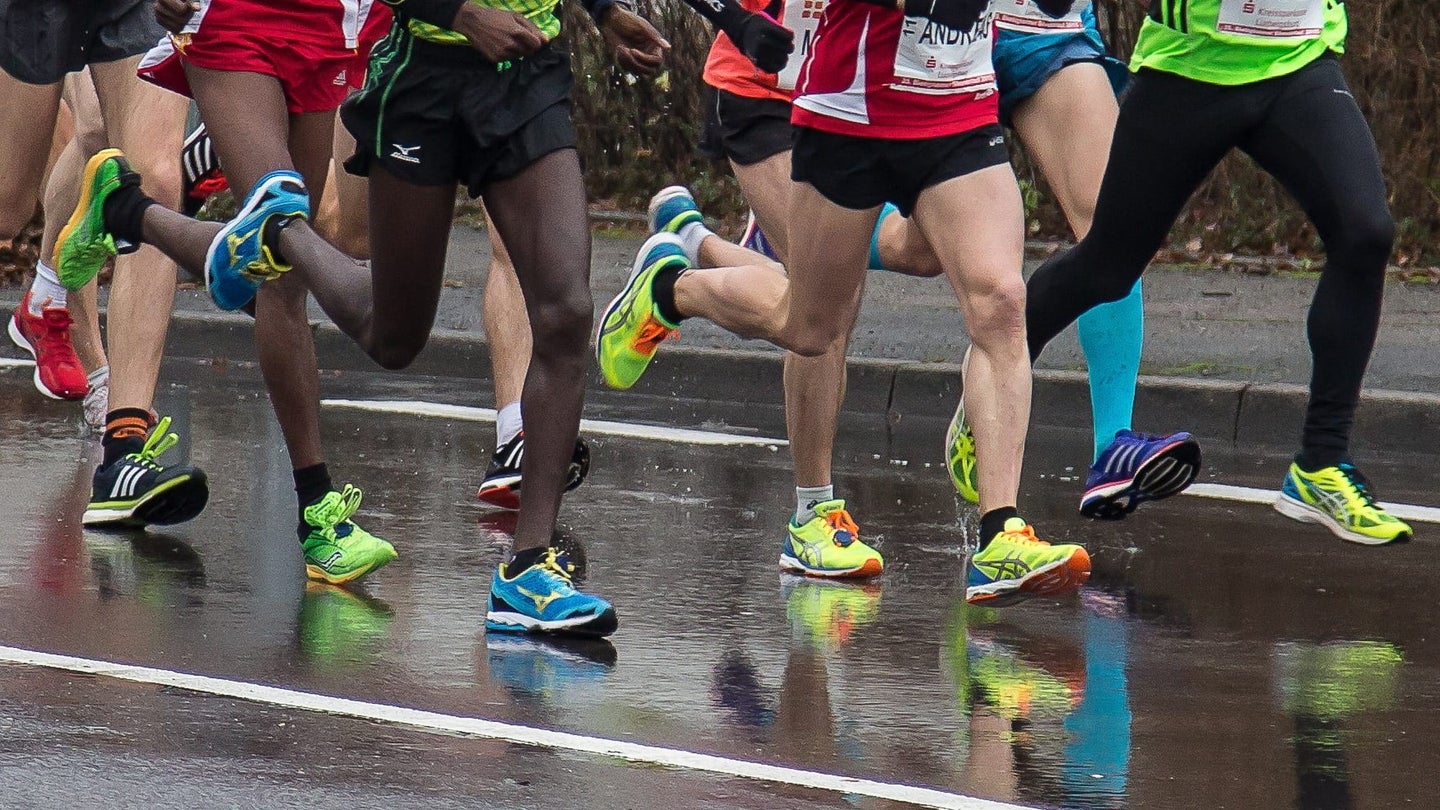 The shoes that athletes wear during races have entered the spotlight in recent years, thanks to increasingly advanced tech innovations. Piqsels
SHARE

The Tokyo Olympics are set to begin July 23, and athletic prowess won’t be the only thing on display. The gear that athletes rely on will also be center stage—and on their feet.

Here are just a couple of the newest, highest-tech running shoes that you might catch a (blurry) glimpse of on Olympians later this month.

Nike introduced a pair of carbon-fiber plate running shoes in 2017. Carbon-plate shoes include a hardened, rigid layer of material between layers of cushioning to act as a spring, explains Bryce Dyer, a sports scientist at Bournemouth University in England who researches the design, development, and ethics of sports technology and equipment.

The fiber plate is compressed, and then rebounds, returning more of the energy to the runner. The record-breaking 2017 shoes were dubbed the Zoom Vaporfly 4%, for their ability to reduce the energetic cost of elite runners by an average of 4 percent.

Today, people are considering what’s on the feet of athletes, particularly runners, like never before. “What Nike basically did was that they cracked open that door,” says Dyer. “And now what a lot of the other companies will do is kick that door wide open and really explore the boundaries of where this kind of technology can go.”

Since 2017, Nike has incorporated those carbon fiber plates into racing shoes for sprint, middle distance, and endurance events. The latest of their shoes built for the 10k and marathon are the ZoomX Vaporfly Next% 2, released in February. 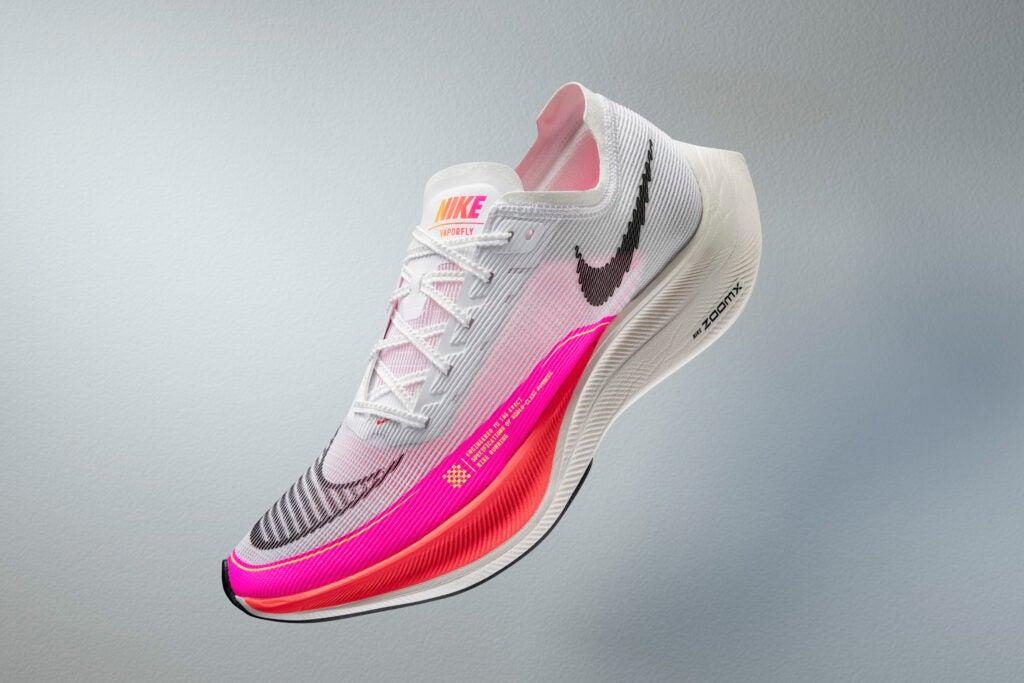 Nike’s newest update on their carbon fiber plate distance running shoes are the ZoomX Vaporfly Next% 2. They’re just one of the high-tech shoe options athletes will be sporting at the Olympics. Photo courtesy of Nike.

The Vaporfly Next% 2 incorporate the same full-length carbon plate and proprietary, extra-responsive ZoomX foam as their predecessors, but with significant changes to the shoe’s upper.

The top part of the shoe is now made from a “new, engineered mesh material, which is a lot softer” than earlier versions, says Rachel Bull, a senior footwear product director at Nike Running. The new upper is also more breathable, for the sweltering heat runners are likely to face in Tokyo. Bull describes the tongue of the Next% 2 as “plusher” in this iteration, which reduces the pressure from laces on the upper foot. There is also more reinforcement around the forefoot for more durability and stability on tight turns.

She explains that, in previous years, developing new racing shoes was all about minimalism. “We were just obsessed with shaving grams, and making the lightest shoe possible,” she says. But while shoe weight is important, “the most important thing really is running economy and energy return.” And in distance races like the 10k and marathon, comfort is critical for athletes’ staying power.

Nike also released the Alphafly Next% in March 2020 (prior to the Olympic postponement), which marathoners will be wearing as well. These shoes include a small air-bag-like “Zoom pod” in the forefoot and have a slightly thicker sole, or higher stack height, than the Vaporfly. That should lead to even more springiness. Bull describes the foam components of a shoe as like a battery. The more foam, and the more responsive the foam is, the more energy can be stored and returned. Yet the upper of the Alphafly is tighter and less rigid than that of the Vaporfly, fitting more like a sock than a traditional running shoe. 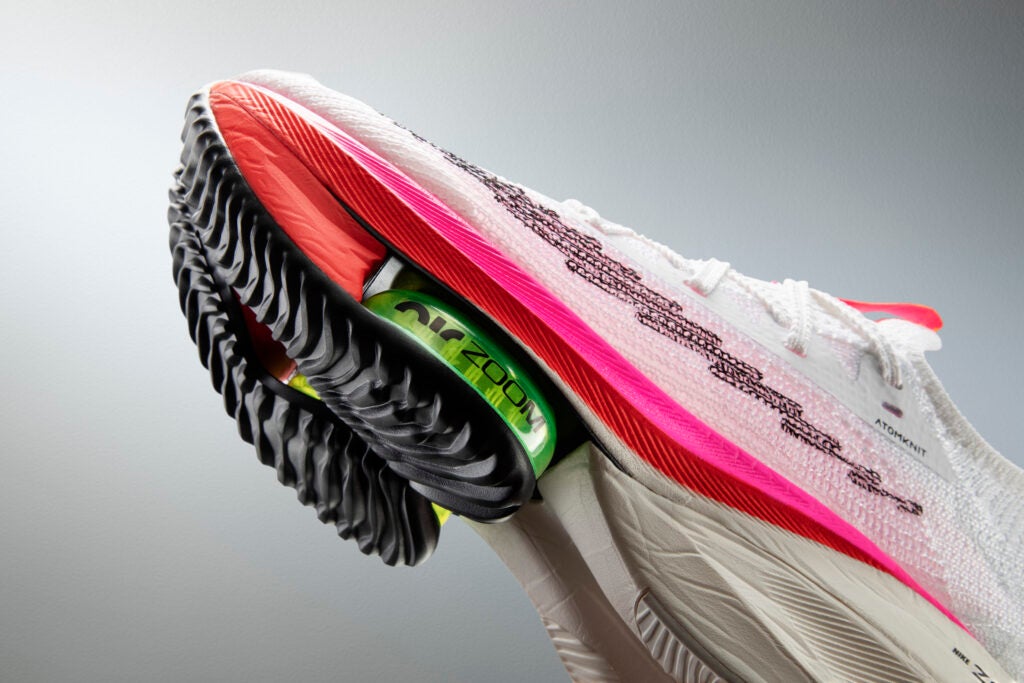 The Alphafly Next% includes a “Zoom pod” at the forefoot. Photo courtesy of Nike.

Both high-performance shoes will be popular amongst Olympic athletes in the marathon, and like Vaporflys will likely also be common in the 10k, says Bull. “I think it’s really just a question of personal preference.”

Dyer echoes this view. “[Everyone’s] running style is different, their body mass is different, and all those things will change the biomechanics,” he says. For some athletes, he points out that stability and slight gains in support and comfort may be more beneficial than an extra millimeter of foam.

Asics is thinking about individuality

The future of shoe tech is customization, according to Dyer. He imagines that down the line, elite athletes will have shoes made specifically for their body weight, running style, and race distance. Asics has taken a step down that track with two new shoes that will be on Olympians’ feet this summer.

The first, the Metaspeed Sky, is designed with “stride type” runners in mind, while the Edge caters to “cadence type” runners, says Chad Mullavey, global product line manager at Asics Performance Running. He describes stride-type runners as gaining speed primarily by lengthening their stride, and cadence runners as both increasing their stride and taking more steps to go faster. 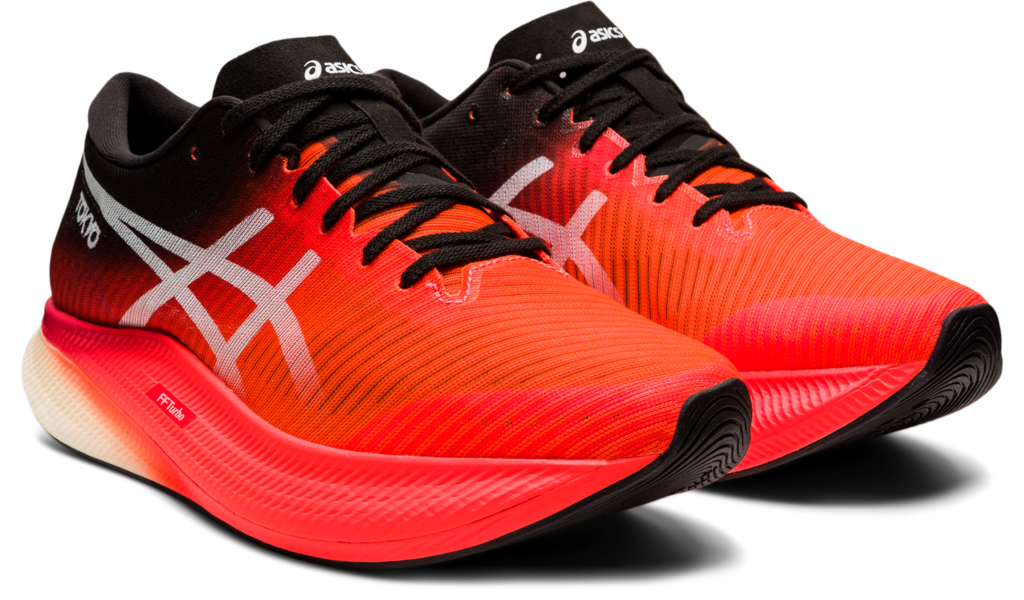 The Asics Metaspeed Sky is designed to boost speed specifically for athletes that lengthen their stride as they run faster. According to Asics, there will be 22 athletes wearing these shoes in marathon and triathlon events, two athletes will be competing in the Metaspeed Edge. Photo courtesy of Asics.

Though made for two different running strategies, both the Edge and Sky have the same upper design: a breathable single-later textile. They also both have a carbon-fiber plate running the whole length of the shoe, sandwiched between layers of Flytefoam Blast Turbo, another proprietary responsive foam material, which is meant to release as much of the energy put into it as possible. The bottom of the shoes includes textured rubber for traction, but only in high contact areas to reduce shoe weight, and the midsole is reinforced with an extra rib to reduce the impact effects of high speed running, Mullavey says.

The carbon plate is shaped slightly differently in each model, and the shoes have different sole designs. The Sky has a higher overall stack height than the Edge (i.e. more foam), but the Edge has a larger heel-to-toe height difference. The idea is that runners extending their stride put more energy into each step, and so should aim to get more energy out. Conversely, runners adding in more steps to increase speed should be enabled to more efficiently turn over steps. The Edge and Sky look similar, but contain subtle design differences. The sole on both shoes has rubber only at the places of high contact to reduce the shoe weight. Photo courtesy of Asics.

In testing, Asics claims that the Sky improves running economy by three percent compared with their previous shoes, and that the Edge reduces the number of total steps needed to finish a marathon by an average of more than 2.5 percent compared to their previous shoes. Mullavey explains that by moving away from the cookie-cutter approach, Asics hopes to get high-level athletes performing closer to their best.

[Related: Science helped me run my first marathon in 3 hours and 21 minutes]

Ultimately, the proof of concept for both companies and all the other shoes in use will presumably emerge on the race course. Dyer points out that there are lots of variables at play in shoe design, and there isn’t substantial data about things like the best height drop, sole design, or number of spring components.

And when it comes to sports, the mental game plays a big role in the physical. For instance, is shaving off a gram of shoe weight important for a runner? Dyer says maybe. But “if you tell an athlete, ‘this shoe is the lightest shoe they’ve ever had,’ it’s more than likely that there would be a placebo effect in there.”

In other words, if an athlete thinks their shoes are the fastest on the course, maybe they’ll be at their quickest, too.