How elite athletes keep their heads in the game

A professional athlete's mental game is just as important, if not more so, as their physical one. 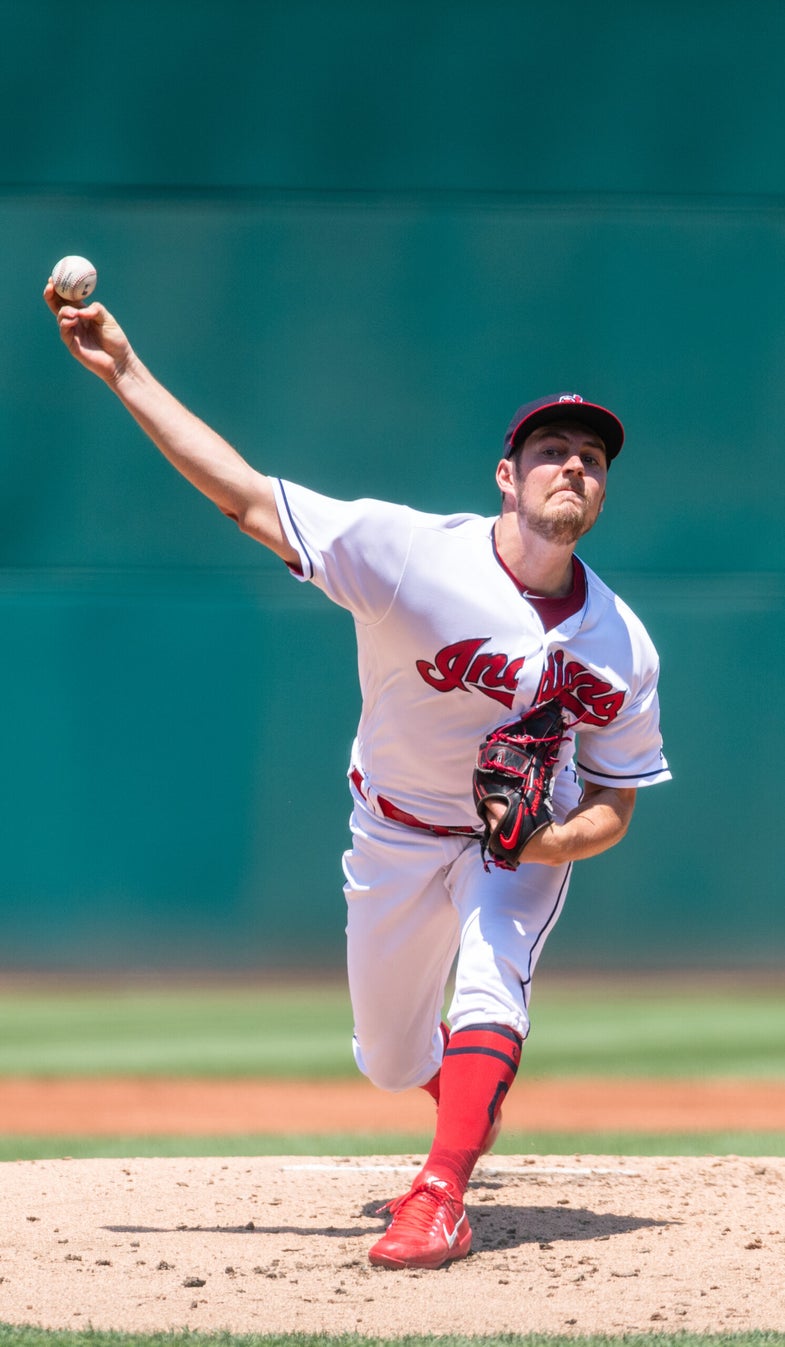 Trevor Bauer clinging to the ball as he pitches. Getty Images
SHARE

Off the mound, Trevor Bauer can tell you about the movement of every stream of air over the seams of a baseball. But when he’s pitching a game for the Cleveland Indians, he wouldn’t dare to think about the physics at play.

“This game is extremely complex, and when I’m on the mound or on the box, I can’t think about this stuff,” Bauer says. “You’ve got to train yourself so you can shut off your brain, you have to train yourself not to think.”

Though the physicality of professional athletes may be the most visible part of their game, their mental training is just as important—and it can be just as rigorous. Distractions are inevitable, failure looms, and the mind has the power to disrupt a victory as easily as any physical injury. So, professional athletes must train to control their minds, regulate focus, control emotional mayhem, and reach the state of flow that creates highlight-reel performances. And it has to start early.

“The younger you can learn these skills the better, so as you’re progressing through these levels of sport, and as the pressure and demands increase, you’ll be resilient and able to cope with these demands,” says Natalie Durand-Bush, a professor of sports psychology in the School of Human Kinetics at the University of Ottawa. “Just like any other physical skill you’ve got to spend time training mentally—you don’t develop that overnight.”

Concentrate on your focus

“The skill of focusing is about realizing where to put your attention and being able to make those shifts very quickly, almost at a subconscious level because everything is happening so fast,” Durand-Bush says. Learning how to do that involves training with different distractions that might make an athlete lose focus during a crucial moment, then bringing their attention back to the game.

Tiger Woods implemented this method by practicing his golf swing while his father would jingle keys or drop coins to make noise. By anticipating distractions and creating contingency plans for different seasons, events, and even specific competitors, Durand-Bush explains that athletes can avoid losing their focus mid-competition. “All that [training] goes into it so you are fully prepared and you minimize the unknown and the effect of surprise. So, if it happens in real life, you’re not going to press the panic button and lose your focus. You just go through your planned response.”

To learn this level of focus, Aidan Moran, professor of cognitive psychology at the University College Dublin, says he thinks it’s helpful to think of concentration like a spotlight. His method turns focus from something that you can lose to a mindset that can be practiced and changed. “If you regard concentration as a spotlight, I think that’s a very powerful idea,” Moran says. “You can never lose your concentration, it’s always somewhere.”

Of course, paradoxically, sometimes focusing can have the opposite effect. No matter what an athlete does to prepare, failures will happen, but often the intense emotions associated with competition, frustration, and sadness can snowball into anxiety. “You’re so invested emotionally that you try harder and harder and harder, your body speeds up, your brain moves to another gear, everything is faster, but it’s not better. That’s what happens in choking experiences,” Moran says. “People choke when they get anxious.”

Typically, choking indicates that the athlete’s attention is on themselves, which Moran explains is often due to a phenomenon called paralysis by analysis. “If you focus on something really technical while you’re trying to execute a skill, it always leads to a deterioration of that skill.”

As a batter standing at the plate, you might worry about getting your elbow to your hip before your hand arrives so you can get enough power to hit a fastball, Bauer says, or about how you only have point four seconds to react to a pitch before you have to swing. Those things are both true. But then you have a hitter swinging too early or too late, or swatting at bad pitches.

“You’re trying to exert conscious control over actions that are better controlled automatically,” Moran explains. Under the timed pressure of a pitched ball, this causes errors. If an athlete isn’t careful about controlling their mental routines and regaining their concentration, one botched play can become a slump. It’s true even for amateur players who have nothing to lose but a casual game. At pro-levels there’s the added fear of embarrassment (often on national television), of losing a spot on a roster, of losing sponsorships. And that all causes yet more anxiety.

“Your performance decreases, and then your confidence decreases,” Durand-Bush says. It’s a vicious cycle. At this point, she explains, the best thing an athlete can do is to lean on external support to deal with the anxiety and return to the basics. “You don’t lose [your skills] overnight. It’s like riding a bicycle. You don’t forget how to ride a bike, or to pitch, or how to bat.”

Central to all this mental training is a great coach, because not all practice is created equal. Most athletes practice the elements of the game that they already like or excel at, Moran says. “What makes some players exceptional in their performance is that they’ve engaged in deliberate practice. It is finding those areas of where you can’t perform well, or at all, and deliberately working on your weaknesses to improve their game.”

The best coaches are those that teach their athletes how to think as well as how to play, says Jim Denison, a professor of kinesiology at the University of Alberta. Training for these kinds of peak performances requires practice that doesn’t always look like a success, he says. It’s messier, allows athletes to make mistakes, and takes more time.

Typical drills— whether they be sprints in a pool or across a football field—are great if you’re just trying to get fit, but if you’re trying to gain a competition mentality it’s poor preparation. It does nothing to prepare an athlete for the surges of energy and emotion or the pain of exhaustion. “To do something amazing,” Denison explains, “you have to be willing to get into zones that you’ve never been in before, that are extremely uncomfortable and painful.”

To train athletes for that head space, a coach has to force an athlete to actually experience pain and risk—and that can be scary. “The coach would talk to the athlete more [like], ‘I want you to explore what it feels like to experience the feeling of pain,’” Denison says. They would talk to the athlete about how to understand their pain, and how to come to grips with that mental challenge. It’s not just about getting an athlete fit, he says, it’s about designing a cerebral workout as well as a physical one.

“Coaches who are credited as being the best in the world expect all of their athletes to be earning a PhD in their event,” Denison says “It’s a pretentious thing to say, get your PhD in your event, but they want athletes thinking.”

The zen of sports

But there is a catch to becoming a thinking athlete. The best performances usually come when you’re thinking of nothing at all, in a space known as the flow state. “It’s a rare, highly elusive, highly coveted state, where there is no difference between what a person is doing, and what a person is thinking,” Moran says. “The flow state is when everything comes together.”

Amateurs can have a lot of trouble reaching this state. “People who are starting to play on the first tee in golf are always very aware of who’s watching, and start to swing faster and faster,” says Moran. But the faster they swing, the poorer their game.

Pro golfers have figured out how to handle this. Occasionally, Moran says, you will see a golfer talking with their caddy before a shot. “Golfers talk to their caddies not to get advice, but to distract themselves from thinking.” He’s even seen golfers sing to themselves to stop themselves from over-analyzing. Preventing conscious thought keeps them primed to perform the motions they’ve learned to do perfectly and automatically. And it’s this ability that sets them apart from everyone else.

“Most high-level athletes, whether amateur or professional, have a higher level of mental skills and a better ability to use them consistently under pressure,” Durand-Bush says. Learning to let go, and just play the game is a skill like any other in the pro-athlete’s repertoire.

“There is a Zen paradox that in order to gain control, you have to give up control,” Moran says. “Typically in music and in sport, when flow states occur, peak performance tends to follow.”