And Michael J. Fox is wearing them to help the fight against Parkinson's 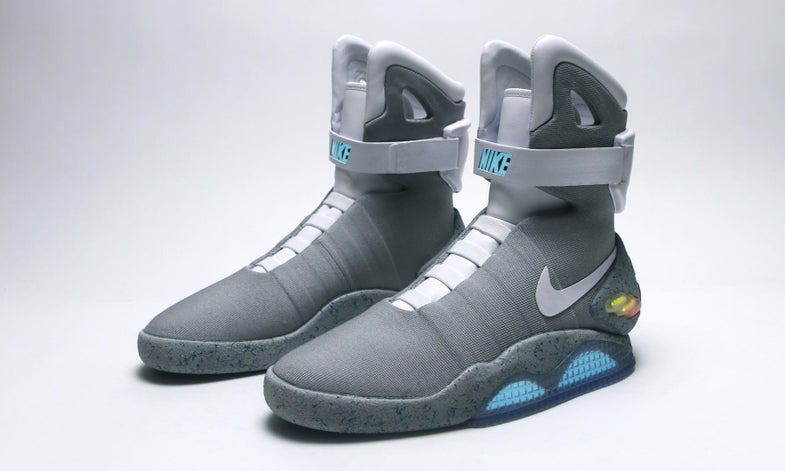 In the 1989 hit move Back To The Future Part II, our protagonist Marty McFly travels to what was then the strange and distant future day of October 21, 2015, encountering all sorts of strange modern technologies, like hoverboards, dog-walking drones, and Nike shoes that lace themselves up That’s today, and while our hoverboards are far from cinematic perfection, Nike has gone ahead and brought the shoes from the movie into real life.

Yes, that’s Back To The Future star Michael J. Fox in a pair of self-lacing Nike Mags that he says will be available for the public in Spring 2016. No price has yet been released, but the announcement fulfills years of rumors and hopes from fans of both the film and the shoe company.

While Back to the Future gave the design some retro-future chic, there are real, practical applications for self-lacing kicks. Shoes that lace themselves are great for people with disabilities, who may have trouble tying their shoes. Michael J. Fox himself suffers from Parkinson’s, and a letter from Nike that Fox tweeted out earlier today says money from the shoes will go to Fox’s foundation to fight Parkinson’s. That’s one condition we’d love to leave in the past.

In the meantime, there are DIY instructions for those who don’t want to wait until 2016 to live in the future.

Update: Michael J. Fox appeared on Jimmy Kimmel Live on October 21 wearing the Nike Mags and showing the clearest view yet of their actual self-lacing automation. He also clarified that the consumer models coming in 2016 will be limited edition and auctioned off in order to raise money for the Michael J. Fox Foundation and its support for Parkinson’s research.