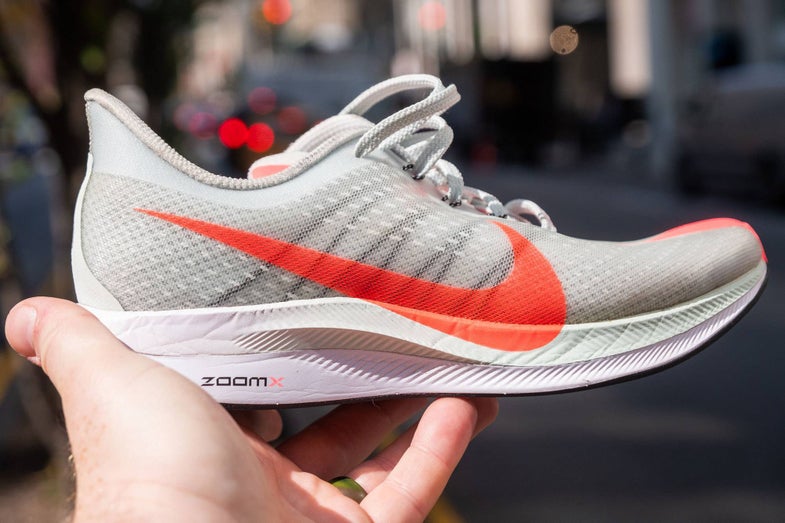 Runners typically save their very best for race day: Their freshest legs, their best headspace, and their spediest shoes, hopefully coalesce to achieve a fast time. But, the vast majority of a runner’s pavement pounding comes during training, and those practice runs require different sneakers. For those long hours, runners need a good training shoe: Unlike a racing shoe which is meant to propel a runner forward, a training shoe should feel softer, expertly absorbing the repeated pounding on the pavement to lessen impact on the joints. At the same time, it should have some spring to its step to make those long runs palatable. . Enter Nike’s new Pegasus Turbo.

Last year, the sports and footwear company debuted its fastest running shoe yet—the Vaporfly Elite, which was designed specifically to help elite marathoner Eliud Kipchoge and others run a marathon in a time faster than two hours—a human endurance barrier that echoes, to some degree, the plight of the four minute mile. The shoe features a newly designed midsole (the chunk of foam sandwiched in the middle of the shoe between the insole and the outer layer) dubbed ZoomX as well as a curved carbon-fiber plate. Both features are meant to spring and propel a runner forward and increase the shoe’s energy return. A higher energy return means a runner has to do slightly less work with each stride. The shoe’s consumer versions include the less expensive Zoom Fly and the decked out Zoom Vaporfly 4 percent.

This past fall, the shoes—along with a ton of hard work and training—helped Kipchoge almost reach that potential with a time of 2:00:25. And non-elite runners are all using the consumer versions to chase down their running goals. And Nike’s not the only company working on super fast shoes. Last year, rival Adidas released its own racing shoe, the Adizero Sub2, also specifically designed to break that two hour marathon barrier.

But those shoes are meant for race day. Nearly all elite, and many novice runners as well, train in an entirely different sneaker. According to Nike, elite runners like Kipchoge, wanted a training shoe whose energy return and bounce resembled that of the Vaporfly Elite that he races in but without the extra spring of the carbon fiber plate. With that as inspiration, Nike built on its long standing shoe, the Pegasus—a sneaker first introduced in 1983 that was meant for every runner. There’s been countless renditions of the Pegasus shoe since then, including the most recent Pegasus 35 that went on sale last month.

But the newest incarnation—dubbed the Pegasus Turbo—which goes on sale starting August 2, contains the ZoomX midsole foam, the same kind that sits inside the Zoom Vaporfly 4 percent and the custom Vaporfly elite racing shoes, but without the springboard curved carbon plate. According to Nike’s testing, the foam is the company’s fastest yet, delivering an 85 percent energy return with each stride. That’s among the highest around. Brooks Runnings’ fastest in its newest foam, the Levitate, comes in at around 70 percent. Traditional foams made from a plastic called EVA typically reach 50 to 60 percent return, but the better newer foams typically hit 70 plus percent return.

With each foot strike to the pavement, a runner transfers energy into the shoe. That energy gets absorbed by the shoe’s cushioning, pushing it down. When the runner lifts her foot up, the cushioning re-expands and sends some of that absorbed energy back. The more energy returned, the bouncier and springier the shoe will feel. And each percentage point counts as runners can typically feel a distinctive difference in energy return even as low as a 1 to 2 percent change. But energy return isn’t everything. Even if a shoe had 100 percent energy return, all its doing is giving you back the energy you put in, it’s not generating new forms of energy. The ZoomX midsole foam is also incredibly light with the men’s entire size 10 shoe weighing in at 8.4 ounces and the women’s 8 at 6.9 ounces. For comparison, that’s heavier than the elite Zoom Vaporfly 4 percent, but incredibly light when compared to most running shoes on the market.

The Pegasus Turbo also has a heel collar that’s designed to curve away from the Achilles tendon, which claims to prevent rubbing and irritation in that area. When I tried them, I definitely felt no rubbing or pressure in that area, but that’s rarely a place where I have trouble in any running shoe I’m in. The upper part has a translucent mesh with Nike Flywire cables that do make your foot feel secure in the shoe.The rubber outsole also has small waffle pistons that are meant to absorb impact and provide traction.

Focusing on the midsole

The Pegasus Turbo’s focus on the midsole is not unlike what other running shoe companies are doing nowadays. In the past year, Nike has focused on two new midsole technologies: the ZoomX and the Epic Reacts, both of which are meant to increase energy return. Last year, Brooks Running released its Levitate shoe with a completely re engineered midsole dubbed DNA AMP which provides a 70 percent energy return, the company’s highest yet.

All of this innovation around energy return is exciting, but it’s important to note that there are far more factors that go into a runner’s performance, like muscle fatigue, than just energy return. A better understanding how all these things work together will ultimately help all runners reach their goals.

How the shoe feels

The shoe definitely lives up to its lightweight claims, but it also has an incredibly soft, plush-like feel. And the energy return is immediately apparent. The first time I wore them, I found myself running faster than my training plan called for without feeling the change.

According to Nike, these shoes are designed to help you through long and short training regimes. As I train for the Chicago Marathon this summer, I’m curious to see how these shoes hold up over the next couple of months, so check back here for an update!

Where can I get it?

The shoes will be available to everyone starting August 2 and cost $180 (less than the Zoom Vaporfly 4 percent shoes at $250 but slightly more expensive than the company’s Epic Reacts and Zoom Fly, both at $150).