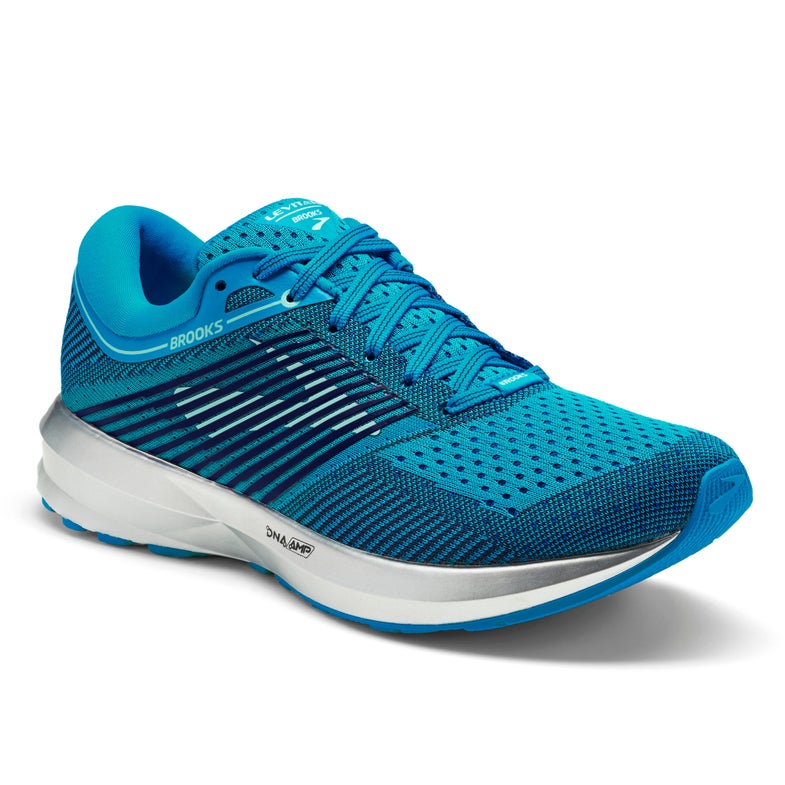 The first few minutes of a run set the pace for the rest. A sluggish start usually signals a lackluster middle and end, but an energetic kick-off can carry you blissfully through grueling training sessions. The shoes you choose play a big part in the overall feel of a run. Some attributes of a shoe are obvious: Spikes to enhance grip, insole cushioning for comfort and arch support, and lightweight materials that won’t weigh down your feet. Energy return is a characteristic you can’t see and only recently has it made its way to marketing material—but it can have a tangible effect on a sneaker’s performance.

When a runner’s foot hits the ground, it transfers energy which compresses the shoe’s cushioning. When the foot rises again, the cushioning re-expands, sending some of that energy back to the runner. A shoe with superior energy return creates a bouncy, springy feeling that, as many runners will attest, can make the jaunt feel easier. The latest sneaker from veteran shoe maker Brooks Running is called Levitate, and it’s designed for enthusiasts and beginning runners, rather than top-level athletes. It promises a 72 percent energy return, which is the company’s best result so far and, according to testing done at the running company’s headquarters, it’s higher than other leading performance shoes in its category. In order to achieve that high rate of efficiency, Brooks partnered with chemical company BASF to formulate a new material for the shoe’s midsole.

The potential of energy return

Energy return is an important metric for running. “If a shoe has poor energy return, meaning it dissipates [that mechanical] energy as heat, then the muscles must do work to replace the energy that it lost,” says Rodger Kram, an integrative physiologist and biomechanist at the University of Colorado at Boulder. The shoe that provides high energy return provides an ideal balance of compliance, or how much a material stretches which determines how much energy can be stored, with resilience, which is the percent of energy stored that is returned.

Kram says it’s easier to consider the concept of beneficial energy return in reverse—how poor energy return can make your run worse. Running on loose sand, like on a beach, will force a runner to work harder because the sand is very compliant but not at all resilient. Running on a steel plate, which is highly resilient, will give 99 percent of that energy back, but because it is not compliant, it has only a tiny amount of energy to surrender. Surfaces that have an ideal balance of these two factors will provide the highest energy return and the most benefit.

In a 2002 study done by Amy Kerdok, then a PhD student at Harvard, researchers manipulated a “tunable” treadmill, the surface of which was almost purely elastic, or resilient, but had a variable stiffness. They found that the more compliant they made the surface, the more energy it could store and return. And that converted into energy savings for the runner. In fact, on the softest setting, the researchers found that the runners consumed 12 percent less metabolic energy. That may not seem like a lot, but it translates to huge cumulative savings, says Kram. “It’s worth probably 10 minutes in a marathon.”

The key to energy return in a sneaker is the midsole, which is the cushioning sandwiched between the insole and the outer layer of material that surrounds the shoe. A good midsole material is one that can provide both support and stability, and can bounce back after being compressed during a footfall and shift the energy back upward as you lift your foot. Elite sneaks like Nike’s new Zoom Vapor Fly 4 percent running shoe—which the company designed primarily to help world-class runners break the two-hour marathon barrier—focus on this aspect at the cost of other metrics like cushioning that enthusiast runners need.

Before Levitate, Brooks’ bounciest shoes (like the Launch) provided a 65 percent energy return. It may not sound like a big shift in numbers, but it’s a tangible difference for the runner. According to Carson Caprara, a lead product designer at Brooks Running who helped work on the Levitate’s design, a runner can distinctly feel even a 1 to 2 percent increase in energy return during their run. In fact, many competitive runners have a lineup of running shoes in their closet, all with different energy returns and degrees of cushioning and firmness, so they can tailor their footwear’s kick to the type of training they are doing.

Over the past few decades, running shoe companies have employed a material called ethylene-vinyl acetate (EVA) in their shoes’ midsoles. In fact, in 1977, Brooks’ Vantage running sneaker was among the first ones to work with the material. But over the past few years, sneaker engineers at Brooks had noticed that EVA could only get them so far when it came to energy return. “A lot of us felt like we were hitting a dead end, in a sense, with EVA. We weren’t quite getting what we wanted as far as energy return,” says Bennett Grimes, a footwear product line manager at Brooks Running.

To push past this brick wall, the company teamed up with the chemical group BASF to find a new midsole material that was still suitable for a running shoe, but could go beyond what EVA was capable of. They landed on polyurethane (PU). This material was already being employed in a number of different technologies, from automobile tires, to the foam inside couches and car seats, to the coatings of electronic equipment which makes them more shock resistant. And running shoe companies have just begun, in the past few years, to experiment with it in their shoes’ midsoles.

PU is a much easier material to compress than EVA, which means it can return the same amount of energy in a much softer shoe, says Grimes. “We didn’t want to make a hard shoe, we wanted to make one that was still forgiving with that float feeling. We couldn’t get the best of both worlds with the EVAs we were using.”

To increase the Levitate’s performance, Brooks housed the PU foam—which the company calls DNA AMP—inside a thermoplastic polyurethane (TPU) film that surrounds the foam. TPU is a super thin piece of plastic that can be easily manipulated to have different widths and thicknesses depending on the intended usage.

That sandwich-style construction allows Brooks to control the release of energy. When a runner hits the ground, it compresses the foam material. Without the TPU coating, the energy would be released out the sides. But the new covering sends that energy right back to the center of the foot instead, allowing it to transfer all that energy in a targeted way back up when a runner lifts their foot from the ground.

How do they feel?

I have put in a lot of miles on various shoes from the Brooks Running lineup. I spent three years running in Brooks’ Glycerin, one of the company’s most cushioned kicks that makes you feel protected as you pound the pavement. But I’ve also run in the company’s Launch model, which, until now, had been one of their highest energy return shoes, as well as a plethora of other running shoe brands of similar structure and function to both the Glycerin and the Launch.

Overall, the shoe definitely gave a boost. Racing in the Brooks’ Glycerin, my fastest 5K time was a 23:02. Although I didn’t race any official 3.1 mile races in the Levitate, I did time my 5K once, and I clocked in at 22:34 (Note: That was in the middle of training for a 10-mile race, and I was in extremely good personal shape). Since I typically run in a shoe that emphasizes cushioning over energy return, I definitely noticed a difference when I ran in the Levitate. Each stride felt bouncier, and the effort that I was putting in was getting a greater return. I wore them on long and short runs, ranging from fast interval sprints to longer 10-mile endurance efforts. I appreciated the Levitate the most during the shorter, faster-paced miles.

To find a better comparison, I wore them for a few days on varying intensity runs and then switched to the Brooks’ Launch, a similar shoe that is meant to boost you from the ground (but with an energy return of just 65 percent). There was a discernible difference, even with just a 7 percent reduction. You absolutely don’t need to be an elite runner to notice it.

The advantage that a high energy return has on a runner’s performance is still somewhat controversial. Energy return is not the only metric for determining the complete metabolic cost of running. Generally speaking, a person becomes a faster and more fit runner—and thus the energy required to do so reduces—simply by putting in a lot of miles. “Training status is the most important parameter. Running gait, or form, will also make a difference,” says Wouter Hoogkamer, an integrative physiologist at the Locomotion Lab at the University of Colorado at Boulder. “But typically people self-optimize their running form with some amount of running.” The type of surface the person is running on, and even the weight of the shoes themselves can make a difference, says Hoogkamer. On average, every 100 grams of added mass per shoe increases the metabolic cost of running by 1 percent.

Some also say that even if a shoe was able to send back all the energy the runner provided, that amount is still small compared to the total energy a runner’s muscles employ to move the person forward. But many physiologists and shoe makers argue that every little bit can help. And energy return is a bit part of that. Much of the research into energy return has focused on marathon racing shoes. One 2013 study compared Adidas’ brand new (at the time) Boost shoe to an average energy return running shoe and found that on both the treadmill and the ground, runners in the Boost had a small, but statistically significant reduced oxygen consumption, which is the amount of oxygen someone must deliver to make their muscles move. Essentially, that means they can do the same task with less oxygen. The difference was about 1 percent. Another study, done by Kram and Hoogkamer (which was funded by Nike), found the Nike Vaporfly shoe had, on average, a 4 percent overall energy savings. “We think that is big,” says Kram.

It’s still unclear how much of a practical improvement energy return in a shoe can provide. There are so many other factors involved in how a runner will perform from day to day and no shoe alone will ever turn someone into an elite runner. The famed Ethiopian runner Abebe Bikila is perhaps a prime example. Back in the 60s, he won numerous races—including the marathon at the 1960 Olympic games in Rome—while racing barefoot. Caprara says that researchers are now trying to gain a better understanding of what leads to muscle fatigue in runners. That knowledge will help to better figure out how to create footwear that will best optimize performance. But one thing is for sure: You still need to find the motivation to actually put on your kicks and hit the road. For me, the knowledge that the Levitate shoe will help make those first few painful minutes more bearable was enough.