Under Armour Speedform Review: I Wore A Bra For My Feet, And I Loved It

I wanted to hate the Speedform, a new running shoe from the Baltimore-based athletic apparel manufacturer Under Armour. It’s an unusual shoe, not least for the much-advertised fact that it was manufactured in a bra factory rather than a typical sneaker factory. The pair I was sent has a piercing blue upper with an eye-searing red-orange sole, toe dividers (not separate toes, but visible outlines of toes), are meant to be worn either barefoot or with socks, and costs $120.

I do not look kindly upon showy neon workout wear. Working out is when I’m at my least attractive; I’m sweating and straining through basic exercises, bouncing and flailing, my body the rough shape and texture of a bag of Jello-O, so I’m trying to keep things as quiet and unobtrusive as I can. The last thing I want is to draw attention to myself. I usually work out in a pair of $40 New Balance sneakers. They’re black.

And yet I found the Speedform excellent. Not perfect, and not suitable as an all-around exercise shoe–but for running, they’re the best sneakers I’ve used. 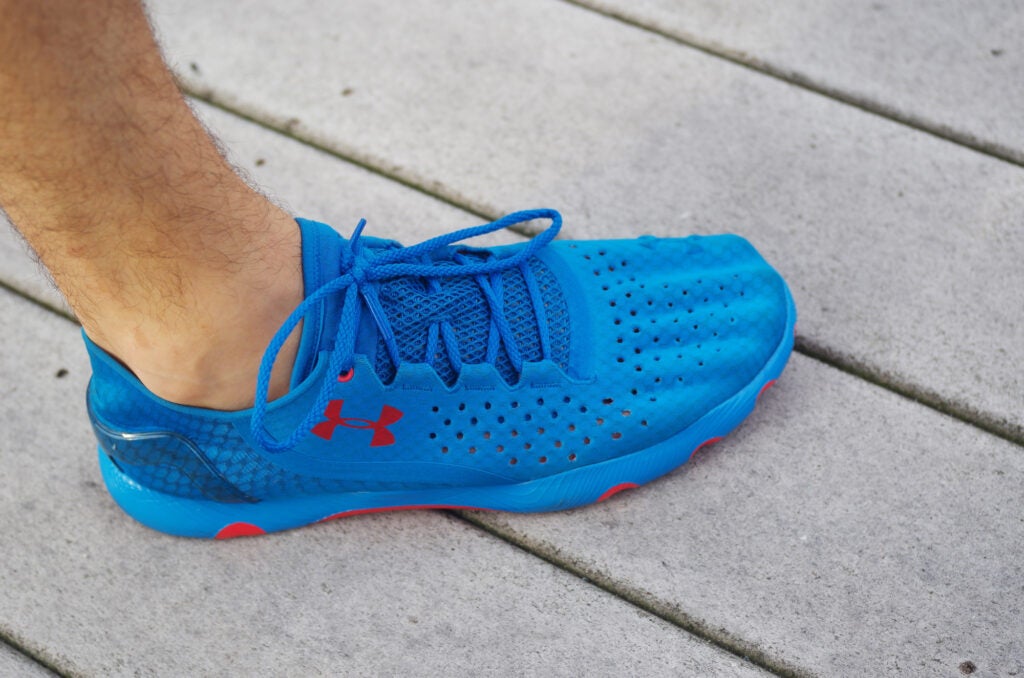 Under Armour Speedform, On My Feet

The Speedform, says Under Armour, had the benefit of a three-year development cycle–about twice as long as most sneakers. The team was separate from Under Armour’s other shoe development teams, and tasked with reinventing the entire process. Most other sneakers are made in pretty much the same way as footwear has been made for centuries: a sole, a tongue, a heel, a toe, and an arch, all sewn together. With those three years, Under Armour could axe all of that and come up with something new. The Speedform’s upper is all a single piece of fabric, constructed of a custom-made material that Under Armour wouldn’t tell me much about, for fear of other companies stealing the concept. (That fear is also why they refused to tell me which Chinese bra factory actually produced the shoe.) The fabric is sort of like neoprene, but very breathable thanks to holes poked through the entire body. “There’s no collar stuffed full of foam or a sock liner or anything like that,” says Kevin Fallon, Under Armour’s creative director of innovation. That’s most evident in the heel cup: when you look down into the shoe, you don’t see an insole and an attached upper with a curved stiff piece of fabric around the heel: it’s just one seamless curved space for your heel to sit. It looks more like an especially firm sock than a shoe, on the inside.

Slipping them on feels like a sock, too; somewhere between a regular fabric sock and those rubber AquaSox you wear as a kid when wading through creeks at summer camp. The upper fits snugly around your feet, but doesn’t offer much structure in the way I’m used to. The only support, other than the natural shape of the neoprene-ish upper, is a small piece of clear hard rubber on the outside of the back of the shoe, near the Achilles tendon. There’s no support whatsoever on the sides of the shoes: these are designed to keep you supported while you run straight ahead, and nothing else.

The sole is pretty standard lightweight foam, a bit spongier than most. The bottom traces the lines of the metatarsal bones in your feet, with little rubber bits on the heel and the toes. 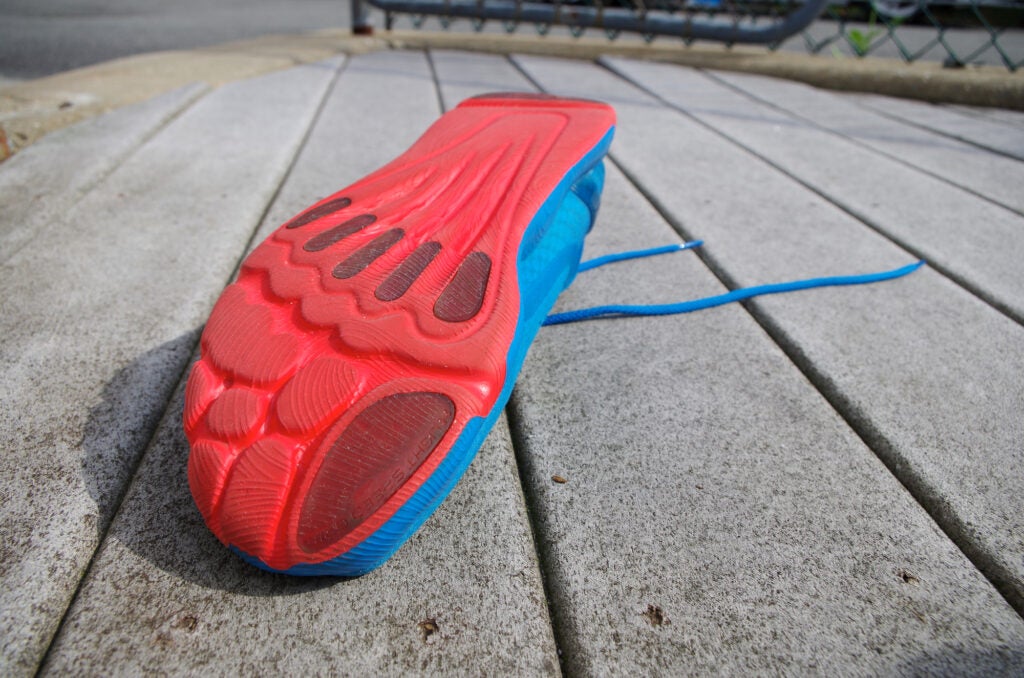 The top of the shoe has toe-notches. These immediately bring to mind barefoot-style shoes like the Vibram Five Fingers, but whereas on the Vibrams they serve a theoretical purpose (to allow the toes to grip the ground individually), in the Speedforms they’re entirely aesthetic. Barefoot-style shoes are designed to offer minimal protection, only for the bottom of the foot, to force runners to run in a certain way. They have no “drop,” which is the difference in height between the height of the sole at the heel and at the toe. Proponents of barefoot, barefoot-style, and zero-drop running believe it’s more natural and healthier to have no drop at all; they say a drop encourages “heel-striking,” in which the first impact and most of the weight lands on the heel. But when running with a barefoot-style shoe, the forefront has much more natural muscle and fat padding, encouraging you to land there instead. (It also gives you a shortened, odd-looking stride, but proponents say it’s a healthier one.) Recent studies have indicated that, at least among endurance runners, heel-striking can lead to knee problems. In typical running shoes, with a significant drop, there’s lots and lots of padding in the heel area, making it comfortable to land on the heel.

So! The toe notches on the Speedform would suggest that these are barefoot-style shoes; we associate visible toes with barefoot-style shoes. But the Speedforms are not barefoot-style shoes at all, nor could they be described as “minimalist,” the marketing word for zero-drop. Typical running shoes have about a 12-15mm drop, which allows for a comfortable rolling heel-strike stride (which most of us have). The Speedform is not a zero-drop shoe, but it is sort of in-between. “It’s kind of a transition shoe; not a typical 12mm drop, but not zero either,” says Fallon. “We think there’s a market for zero drop, but not everyone can step right into those.” The Speedform has a 6mm drop, which I found, coming from a shoe with a 12mm drop, very comfortable.

Anyway, the toe notches do nothing. “The toes are a guided fit,” says Fallon. This means they do nothing. My toes didn’t even really line up with the indentations in the shoe; mostly they just increased my embarrassment to be seen in ultra-garish running shoes by about 100 percent. I think whoever’s in charge of design just decided that visible toes are showy and trendy and stuck them in there to grab the coattails of Vibram.

But despite that, the shoes manage to do something no other pair of athletic shoes I’ve tried does: they disappear while running. They’re so light–less than 6 ounces–that you barely feel them, so you never feel like you’re hauling around $120 worth of rubber and fabric and research and development. Lighter is always better! They may not be minimalist, but I didn’t much notice that I was wearing shoes at all. I use them barefoot, as do many of the team that developed them, though you can wear socks if you want. They feel like incredibly comfortable socks themselves; the neoprene-like material hugs your feet up to the ankle, and there’s no gap between your foot and the shoe anywhere to be found. They don’t slide around, they don’t feel too tight.

The texture of the bottom of the inner part of the shoe, where the insole would be if the shoe had an insole, is just a touch rough for my liking. The first two times I ran, I developed a small blister on the outside of the smallest toe on my left foot. Not great, but the last time I got new shoes, I developed giant repulsive blisters in about six different places, so the Speedform is still doing pretty well.

The shoes aren’t good all-around shoes. “We’re focusing on running for the immediate future,” Fallon says. When I tell him I’d played tennis in the Speedforms, he kind of chuckles and says he wouldn’t really recommend I try it again. And I won’t; the super-flexible neoprene-like upper is snug, but tennis is a game of lunging back and forth, putting tons of pressure on the ankles–you need ankle support in your shoes. I was totally unable to change directions without feeling like my foot was about to slide off the sole entirely. Tennis + Speedform feels like a recipe for a sprained ankle to me.

They’re not cheap, at $120, but they’re no more expensive than other cutting-edge shoes like the Nike Flyknit ($130) or the Adidas Springblade ($180). If running is just one part of your overall workout, and you don’t want to invest in multiple pairs of athletic shoes, these definitely aren’t for you. But for that one task of running, I really like them; they fit better than any running shoes I’ve ever tried, and there are some genuinely new ideas that make other shoes feel inadequate. They feel good enough that I’ll even overlook the toe notches and the neon to use them in public.