Dear Nike: Here’s How You Make a Self-Tying Shoe From the Future

Nike's special-edition Back to the Future sneakers don't tie themselves--and why not? 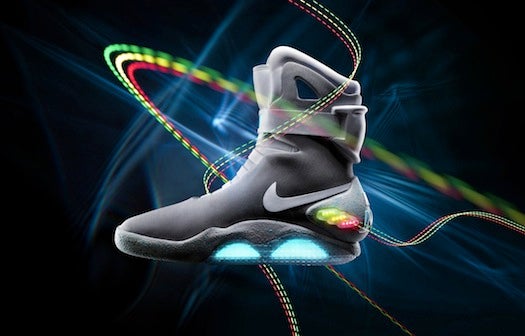 Nike just announced that it’s bringing the famed self-tying, light-up sneakers from Back to the Future II to market as a limited edition, under the name Nike Air Mag. They’re not tech-free, boasting some flashy LED lighting, but everyone knows the main draw of the movie’s shoes was the self-tying–and these shoes could have been so much more futuristic. It may not be 2015, the year depicted in the movie, just yet, but that doesn’t mean we don’t deserve self-tying shoes right now, dammit. Here are some possible routes to the true self-tying shoe.

I spoke to Dr. Hillel Chiel, a professor at Case Western University whose studies occupy the intersection between biology and engineering. He’s previously studied the mechanics of mollusks, built biologically-inspired robots, and has a wealth of knowledge about robots that can change shape and turgidity. When I (sheepishly) asked about self-tying shoes, he asked, only half-jokingly, “how about Velcro?” When we visualize “self-tying shoes,” we might be thinking of two different things: either replicating the way we typically tie our shoes (the bow method) without the need for human hands, or simply a way of tightening shoes, regardless of method. In the movie, the shoes don’t tie themselves in knots–the laces simply tighten, without the need for a bow. But that doesn’t stop us from wondering if a bow-style knot is possible.

“That would be a very complex motion,” says Chiel. “It would require some very novel materials, able to change stiffness on command as well as have significant control.” I asked about this robotic octopus arm, which, despite its size, seemed promising, and Chiel said that that project is certainly working towards a kind of material that, eventually, might be able to perform this type of delicate and extremely complicated task. But that’s far in the future, and besides, Marty McFly’s shoes didn’t tie knots at all.

“What works the best,” Chiel says, “is often incredibly simple, requiring the least actuation and the least control.” There are a few options, either available now or wholly possible, that could replicate the self-tying shoes in the movie.

Last year, Blake Bevin posted a DIY version of self-tightening shoes that works remarkably like the McFly shoes. The first version relied on an external machine and power supply, stuck onto the back of the shoe, that essentially pulls the laces tight. It looked a little clunky, but was actually fairly sophisticated, boasting a pressure sensor in the heel of the shoe that began tightening once it sensed a foot entering the shoe and pressing down, and loosening once the foot is removed.

The second version moves the motor and power supply inside the shoe itself, looking remarkably sleek and similar to the movie’s shoes. Even better, the motor and actuator all fit safely inside the shoe, no external box needed. Blake’s project ended up on Kickstarter, where she asked for $25,000 to slim down the prototype and start marketing it to shoemakers–and got it, quickly. As of late August, she was touring manufacturing facilities for the latest version.

Nike actually has patented a version of self-tightening high-tops, the detailed schematics of which came to light about a year ago. They’re pretty similar to version 2.0 of Blake Bevin’s shoes (though Blake seems a little dismissive of them, calling them “very simple”). They’ve got a small motor in the sole, and are triggered with a button on the side of the shoe. Nike also outlined a design for a pod-like charging station for the shoes–a definite upgrade from the ones used in the movie, which actually had a large power supply, the cable of which ran down Michael J. Fox’s pant leg to the shoes. 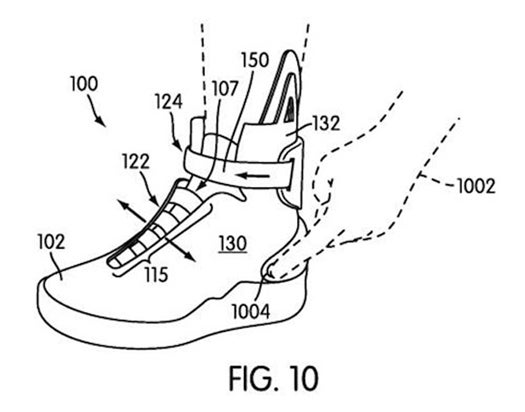 Nike hasn’t made any move to actually bring this patent to fruition, which is too bad–it’s pretty clear the technology for this kind of thing is readily available. Bevin’s design actually seems a bit more sophisticated, with its pressure sensor, but with Nike’s money, the official version could have been so much more.

Dr. Chiel was dubious about the possibility of a fully-robotic shoelace, but that doesn’t mean there aren’t other robotic possibilities. One option, which is so boring we might as well get it out of the way, is for a sort of Jetsons-like box you insert your shoes into, in which an external robot ties them for you. We scoff at this. Not that it’s not possible–our best friend the Willow Garage PR2 is capable of some pretty delicate tasks, as is the human-controlled Da Vinci surgical robot. But that’s not “self-tying,” exactly.

Dr. Chiel talked to me a bit about materials that can stiffen and soften on command. He envisioned a sort of clasp that when stiffened would secure a shoe, and when softened would loosen it enough to be removed. That kind of thing could be achieved with a variety of materials, including shape-memory alloy wires like nitinol. Nitinol is a metal that is molded into a specific shape (like, say, a spring) while hot. When cooled, it can be stretched into any position, but if you send an electrical current through it, it’ll “remember” its shape and return to it. At the moment, that kind of alloy requires quite a bit of electrical current, which heats up and might be unappealing as footwear, but in principle, you might not need that much power simply to trigger the material to move in one direction. Imagine a hanging chandelier: you’d need a lot of energy to hold it up, but if it’s hung from the ceiling, the only energy it requires is enough to actually move it.

FOR FUN AND MORE

Self-tying shoes are a futurist nerd’s bragging rights, sure, but there’s more to them than just showing up every hypebeast in the city. Both Dr. Chiel and Blake Biven talked about their use for disabled people–Velcro shoes still require some locomotion, and slip-ons can be stiff and require tricky movements. A self-tying shoe, especially one triggered by pressure, could be a huge convenience for those who find tying shoes difficult.

Us, though? We just want to be Marty McFly.

apparel
Back to the Future
clothes
feature
Gadgets