The Nike Epic React sneaker has higher energy return to push you forward as you run. 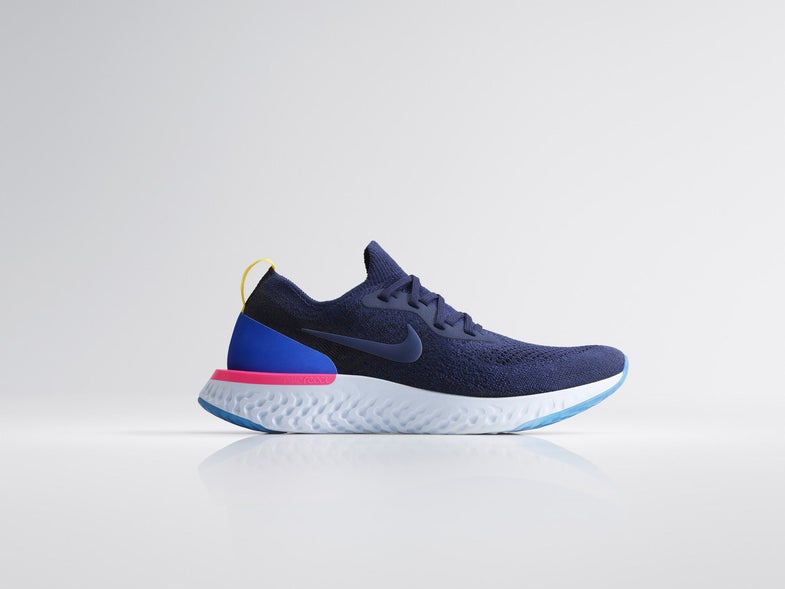 Slippers and running sneakers are two very different things. Both go on your feet, but slippers are flexible, sock-like shoes for luxuriating in your living room. On the other hand, sneakers are structured and stabilizing to support your foot as you pound the pavement. Nike’s new Epic React running shoes fit like a slipper, but a sandwich of carefully crafted materials in the sole protect your feet and the tiny bones within from punishing pavement. The fresh kicks, which hit stores on February 22nd, embody a sock-like fit with a novel midsole meant to return energy on each stride. And unlike midsoles of the past these newly engineered foam layers supposedly don’t lose their bounce as the miles add up.

What’s new about these shoes?

Over the past several years, many running shoe companies have narrowed in on the midsole—that cushiony foam layer that’s squeezed in between a shoes’ insole (which your foot rests on) and the traction-y bottom. A midsole is important for any type of shoe, but it’s especially so for a running sneaker. The foam compresses and rebounds with each stride to actually push you forward. That’s called energy return and it’s a metric that running shoe engineers have been working on for years.

A higher energy return means that the runner has to do a little bit less work each time they take a stride. Nike claims that the React returns 13 percent more energy than the shoes’ closest predecessor: The company’s best performing EVA (Ethylene-vinyl acetate, a type of polymer typically used in midsoles in running shoes) variety, the Lunarlon.

But that’s not Nike’s only brag for its new shoe. The Epic Reacts also employ a brand new midsole. According to the company, the shoes contain a newly designed synthetic rubber that can’t be found anywhere else. Unfortunately, it’s also proprietary to Nike, so details are sparse, but we might be able to hazard a guess.

Midsole foam is often made from EVA, which provides pretty decent energy return. However, after several hundred miles or so, the midsole starts to lose its elasticity and the energy return becomes much worse. Plus, a typical EVA midsole needs about 24 hours rest to bounce back from its last workout. When you pound the ground, the midsole constantly compresses and expands and needs time in between workouts to return to its natural state. So if you ran on Monday morning, you have to wait until Tuesday morning at the same time before the shoe is fully functional again. Workout in them on Monday night and the midsole hasn’t had time to fully expand back to its original form.

The new midsole in the Epic React shoes don’t need this 24 hour recovery period and they also don’t start to lose their effectiveness after the 250 or so hundred miles mark. Though their midsoles are made from a completely new type of synthetic rubber, the Reacts aren’t the first running shoes to make this claim. Just last year, Brooks’ Running debuted its new shoe Levitate, which holds the same two longevity claims. The Levitate midsole is also brand new, but its technology (Brooks partnered with BASF to create it) is no secret: Instead of EVA, its made of a different rubber called PU, which is housed inside a stronger formulation of the rubber called TPU. That combo, Brooks claims provides the Levitate with a super high energy return, and allows it to bounce back between workouts and remain springy for endless miles.

Perhaps the Epic Reacts’ midsoles are similarly structured with a synthetic rubber like PU (polyurethane), though obviously slightly different. And, in fact, the Reacts have a TPU heel clip that’s meant to provide extra stability, similar to Brooks’ Levitate.

But unlike the Levitate, the Epic React is light. And I mean really light. A size 10 men’s shoe weighs in at about 8.45 ounces. That’s not the company’s lightest, but it’s up there (Its 2-hour marathon breaking shoes, the Nike Zoom Vaporfly 4 percent, for example, weigh in at just 6.5 ounces). When you are trying to break records, every ounce definitely counts. However 8.45 ounces is pretty feather-like.

But how does it perform?

The sneakers fit like a slipper that you could wear to bed on a day spent binging TV shows and meandering the house. But instead, you go for a long run. Your feet still feel like they are wearing slippers, from beginning to end. That’s due to the shoes’ continuous upper material which is a thin, sock-like elastic yarn that stretches to fit snug to the contours of your foot.

As for the energy return, you can definitely feel the bounce-factor, especially when you compare it to other, less responsive running shoes. The times when I noticed this the most was when I wore the Reacts for a few days and then switched back to my old running shoes. Often, when buying sneakers, you are either buying one that protects and supports or one that is a little lighter and minimal, but with more responsiveness. The Epic React is excellent in both regards.

They performed well for both short and long distances, hard and easy runs, and for the three weeks and 30 or so miles I’ve run in them so far, I haven’t felt them lose their responsiveness. The shoes are strictly for pavement running, though. When I tried them out on dirt paths and some trails, I felt them slip a bit against the ground.

A luxurious running shoe that provides protection and support while also being lightweight and responsive. At $150, it falls on the pricier end, though it will not disappoint.