A Shape-Changing Shirt Displays How Your Workout Is Going 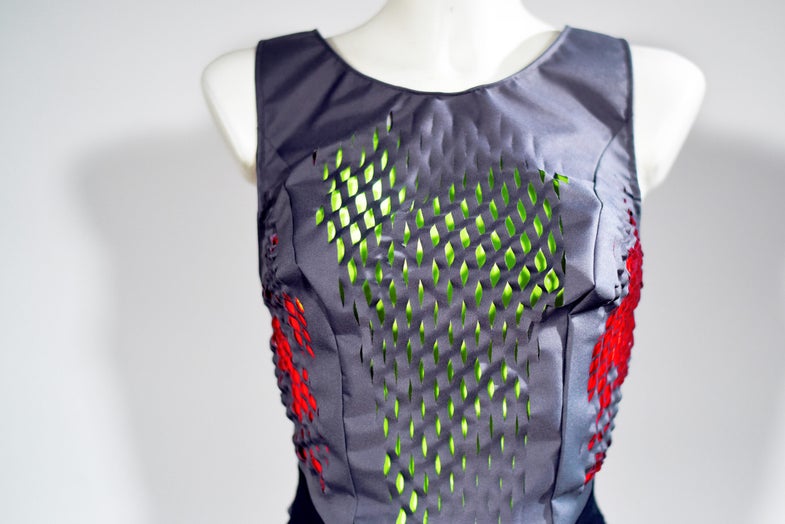 In the future, gym rats might brag about how their workout is going not with numbers on a treadmill, but by revealing a colorful display on their shirts. German designer Simone Schramm has designed a garment that reacts to a wearer’s heart rate by expanding or contracting the wires woven into the garment’s fabric.

Named “the muscle shirt,” the multilayered wearable changes color by pulling itself taut in response to the wearer’s heart rate, revealing the second layer below. The resulting tightness is meant to aid the wearer’s form and posture automatically. Created within the last year, the garment is a work in progress, but a step forward for fitness wearables.

In order to develop the shirt, Schramm and an engineer programmed an open-source piece of hardware that allows for experimental prototyping using Qt, a software package that can be used to create original applications. Once they set the hardware up to monitor a wearer’s bodily changes, the duo then connected it to a stepper motor, which converts digital signals into mechanical movements, to a heart rate sensor and programmed the sensor’s feedback into the software.

As the heart rate increases, the motor tightens the garment, revealing an interior fabric that’s color-coded to display the upper body’s muscle groups. Once the heart rate begins to fall, the tension relaxes, and the shirt’s original gray exterior fabric resumes its shape. The shirt can be configured to an individual wearer by determining their fitness level and then defining a relevant target heart rate for when the shirt should contract and expand.

Schramm says she purposely left out a numerical component. “The wearer can be overwhelmed by numbers and start to trust them too much,” says Schramm. A recent study by researchers in Canada also found that several fitness trackers leak data when synced with other devices—another reason for exercisers to be wary of numeric quantification.

“Through research, I’ve found that those who exercise really want to show their level of physical performance in public, so I decided to create this shirt as a way to communicate their activity visually, but without having to share their data in a public setting,” says Schramm, which sounds about right. “If I were to make an app for the data collected by the shirt, I’d still want the user interface to be a color animation that corresponds to the body, and make it an intuitive experience.”

She hopes to add haptic feedback, or feedback that uses the sense of touch to transmit information about the body, that could help wearers focus more on their movements and their form during their workout—and not on what everyone else is doing. “No one wants their stress-level public, or to feel like they’re being judged based on numbers. People should be able to hide that data whenever they like while still getting the workout they want.”

For now, the muscle shirt remains a prototype, until manufacturers can successfully integrate waterproof circuitry into garments. Schramm eventually hopes to incorporate shape-memory alloy wires that respond to electrical impulses within the fabric so that the garment can be trained to remember a person’s physique. Shape-memory alloys can be set to a particular structure, where, when heated, the wire would become loose and flexible, but once it cools again, would go back to its original form. The garment could then be retrained as the wearer loses weight, or gains muscle, to fit their form.