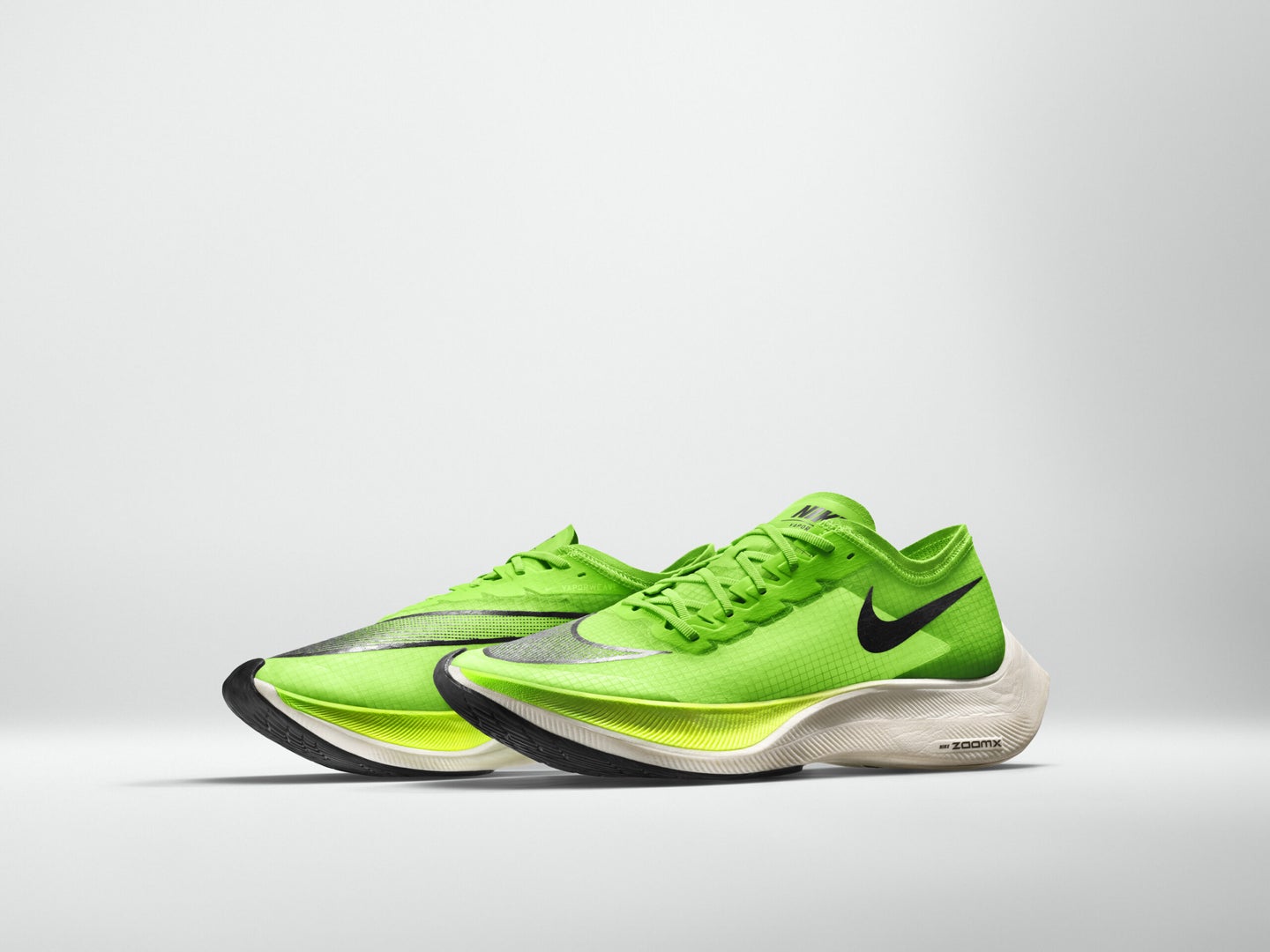 I ran my first marathon this past fall. And, because I took a deep dive into the science and tech behind marathon training in the process, I wore what most would argue are among the fastest shoes on the market today: Nike’s Vaporfly 4%. So named for Nike’s claim that they make the wearer 4 percent more efficient as they run, the shoes have become equal parts envied and notorious. Runners want them—and hate them at the same time: The shoes are proven fast, their bright colors are sure to stand out (for better or worse), and they cost hundreds of dollars.

As of today, the shoes have now entered their third iteration. Nike has dubbed the new version, the Vaporfly Next%, implying that the gain in efficiency that any one runner gets isn’t stymied at four as with the previous version. Overall, the shoe has moderate tweaks to its design. Nike markets the racing kicks as a tool to help elite marathoners break the 2-hour marathon, a human potential barrier akin, in some ways, to the plight of the 4-minute mile of the 1950s. It does this by using an ultra-lightweight midsole with superior energy return (the boost you get from the foam springing back after each foot strike) and a carbon fiber plate, embedded in the shoe, that drives the runner forward. The newest version retains these elements, adds slightly more foam, and introduces a new outer material called the Vaporweave, which is meant to work out some of the kinks in the previous versions to help the shoe withstand the elements on race day.

For my marathon, I wore Nike’s first update after its initial release of the shoe—from the original (which came out in 2017) to include Nike’s Flyknit material. The updated upper made it lighter and is also supposed to fit like a sock.

Not going to lie, though, when I wore last year’s versions, the shoes hurt. Though I have no other marathons (and thus no marathon shoes) to compare to, at the end of my 26.2 mile jaunt, my right foot had cramped up severely and I literally wore a hole in my wool socks where the sock, shoe, and second biggest toe meet. I was also bleeding. Though I probably didn’t spend enough time breaking them in (I wore them twice prior to the race), my feet felt squished and my stride forced throughout the race and I never really could get on board with that sock-like feel of the Flyknit material.

In trying this new pair out, though it was only for a few miles yet, my feet felt far less squished and my stride more natural. Additionally, unlike last year’s Flyknit version of the Vaporflys, I felt like this material allowed me to lace up the shoes such that my feet felt secure and fitted. Here’s the rest of the updates, and why they were added.

In the newest version, Nike replaced this fabric with what the company is calling Vaporweave. The material is lighter weight, more breathable, and absorbs less water. Because weight is such a major factor in creating racing shoes—studies show that, on average, every 100 grams of weight increases the metabolic cost of running by 1 percent—each drop of water a shoe takes in adds to the shoes’ overall mass. According to Nike, inspiration for the Vaporweave fabric came from the material used in racing sail cloths. That material needs to withstand wind and water, yet still remain pliant enough to twist and turn with the wind. While the material is, of course, propriety, one can guess it’s potentially of the polyester or kevlar variety, as these two materials are among the most water-phobic racing sail materials.

There’s no question these shoes are fast. Independent testing done by a handful of researchers—as well as an investigative project out last summer by The Times that used public data through the fitness app Strava—have all validated the 4 percent gain in efficiency claim. Additionally, marathoners clearly like them. In 2017, 46 percent of the top three racers in World Major Marathons wore the Vaporfly racing shoes. In 2018, 63 percent did, and 58 percent of World Major Marathon winners wore the shoes. It’s important to note, though, that those runners were already among the top of their field, so much of an influence the shoes actually had on their winning performances is impossible to know. And there were plenty of winners and podium finishers who did not lace up in the Vaporfly shoes.

The million-dollar question, though, is where that speed comes from. Is it the carbon-fiber plate, the energy returning foam (which Nike calls ZoomX), or perhaps some synergistic combination of the two, where the sum is greater than the parts. I have a completely unscientifically-validated hunch that it could be the ZoomX midsole foam playing a large role. Nike’s Pegasus Turbo, which boasts the ZoomX foam sans the carbon-fiber plate has a similar energy-returning, bouncy feel. Nike’s added more of that foam to the underfoot of the shoe. This is meant, the shoe makers say, to redistribute the foam and create a more stable feel. It’s also just more energy-returning foam. And when literally wearing the shoe, this additional foam also made it far more comfortable to be in. Sometimes, the feel makes all the difference.

If you’ve ever looked at the bottom of the shoes, you’ll see that there’s just not much there. That’s said to keep the weight down, but it also prevents the shoes from having much, if any, traction, which for Vaporfly wearers presented a problem at Hurricane-esque marathons like the 2018 Boston race. To fix this, the Next% version has deeper grooves that help runners grip the ground during twists and turns throughout the race.

Will they make you faster?

The shoes are marketed toward elite marathoners chasing records. However, the vast majority of runners out there working hard at their own personal records don’t fit into that realm. And while there’s been some research on how much faster they can make people, there needs to be a lot more. But don’t let the shoe’s marketing fool you into thinking that this shoe is meant only for “fast runners.” At the same time, don’t let that same marketing fool your confidence: You don’t need them to be fast. For everyday runners, hard work and dedication, and a good training plan will allow your muscles and cardiovascular endurance to provide the bulk of the work. The sneakers are perhaps a boost.

When can I get it?

Limited amount of the shoes, which are priced at a steep $275, go on sale for Nike Run Club members in the United States only, via its app, on Sunday, April 28th. For everyone else, Nike only says that they will be available sometime this summer. Don’t worry, if you are running a fall marathon, you don’t need them until race day, anyway. Let your body do the work this summer.