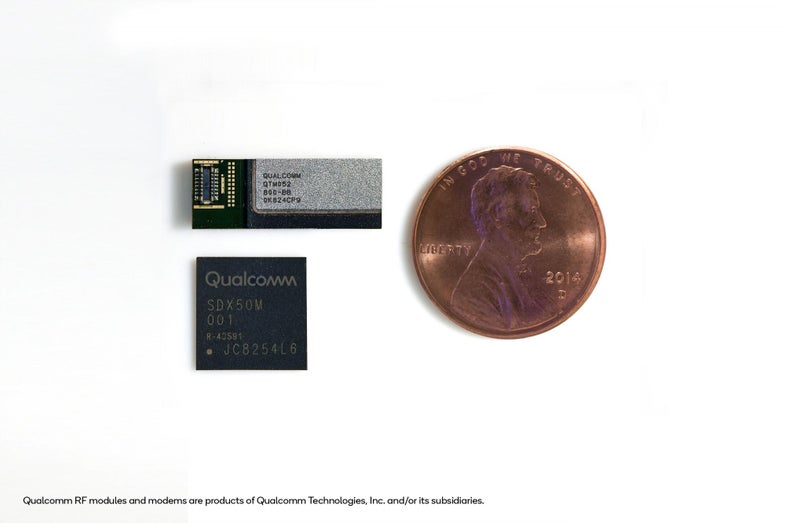 Someday, our smartphones will slurp up data on a 5G cellular network. That 5G term, mind you, is marketing-speak for a next-gen cell system that could hypothetically give us blazing fast data speeds—like in the neighborhood of a gigabit per second. At least that’s the idea.

One way of making those fast speeds a reality is a technology called millimeter wave—radio waves that, you guessed it, have wavelengths measured in millimeters and have very high frequencies, like 30 gigahertz and higher. Those frequencies are much faster than the signals cell phones commonly use now.

Of course, we’ll need cell towers to broadcast these waves in the first place, but even then, your cell phone won’t be able to take advantage of them unless it has the right antennas. In the old days, you couldn’t listen to FM radio without, well, an FM radio and antenna, and the same goes for these tiny little radio waves.

Enter Qualcomm, which has just announced an important development: It has built diminutive antenna modules that are small enough to fit in modern smartphones and are designed to receive and transmit those millimeter waves.

Millimeter waves are known for being tricky. One challenge is that they don’t go that far, and another is that they are easy to block. “If you put your hand on an antenna, it will completely kill the signal,” says Mohammed Al Khairy, a senior manager for product marketing at Qualcomm. “They literally bounce off car surfaces, they bounce off people … even the leaves on the trees will impact the line of sight between the base station and the smartphone.”

One of the ways Qualcomm is addressing these issues is by using beamforming tech—focusing the signal to make it travel further. Another is that the company says that four of the teensy antennas could fit into one smartphone, which gives the system redundancy.

“If you hold your phone in a specific way, your hand may actually block one of the antennas,” says Al Khairy. “But since you have four of them, once you block one of them, you can switch to [another] one.”

Qualcomm won’t disclose the exact dimensions of the new antenna modules, but a photo of one besides a penny is a pretty good indication of its wee size.

Wireless carriers are working on building out their 5G offerings, and the millimeter wave spectrum is part of that endeavour. AT&T says that it’s rolling out 5G using millimeter wave in cities including Austin and Dallas, although they’ll be using more of the spectrum than just the millimeter wave piece. And Verizon is also deploying 5G via those millimeter frequencies in cities like Los Angeles and Houston. Of course, those radio waves aren’t going to be useful to people without antennas in their phones to catch them and transmit them, so that’s why the Qualcomm announcement is key.

Millimeter wave interests carriers because it’s territory on the spectrum that’s available; it’s like building a new road and sending a bunch of cargo trucks down it. “The only reason anybody is even considering these bands is, that’s where the space is,” says Henning Schulzrinne, a professor of computer science at Columbia University and former chief technology officer at the Federal Communications Commission. He sees millimeter wave tech coming into play in situations like crowded stadiums, where everyone is on their phone and carriers could broadcast signals in clean, line-of-sight ways.

He says that the Qualcomm announcement seems like a “significant milestone,” although the antennas need to be inexpensive enough for the phone makers to afford them. Besides smartphones, he notes that one other way that consumers may find themselves using millimeter waves is from a fixed Wi-Fi point in an urban home—the signals could come from a nearby tower, and a device on a windowsill in an apartment catches them and then turns that into a local network.

But he also notes that millimeter waves are no a magic bullet. If you’re holding your smartphone in such a way that you’re physically between a cell tower and the device, you could have an issue. “Your body [would be] absorbing almost all those millimeter waves,” he says, “before they ever have a chance to reach that antenna.”