The Italian carmaker swaps engine displacement for battery power and a twin-turbo V6. 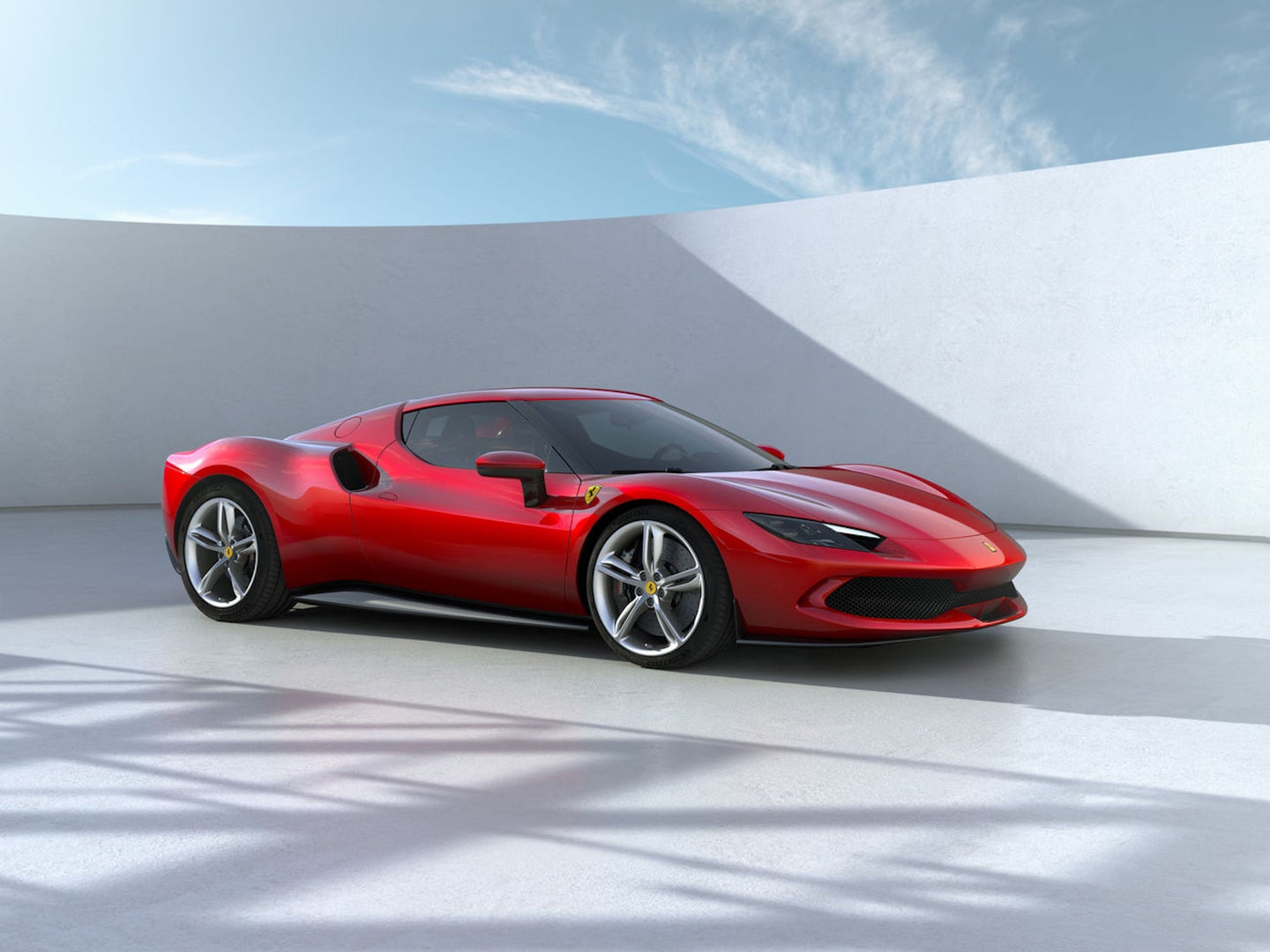 An electric automotive future is on the horizon. As more daily-use cars become battery-powered, consumers are on the fence about whether or not to accept or reject the most shocking change in decades.

Supercars aren’t exempt from the transition either, and Ferrari is the latest luxury performance automaker to look towards electrification to entice its tech-hungry customers. Its newest offering is the sharply designed 2022 Ferrari 296 GTB: a rear mid-engine hybrid supercar that offers drivers a glorious 830-horsepower engine.

It should come at no surprise that Ferrari is introducing another electrified car into its lineup. Automakers across the industry have been moving to more sustainable propulsion methods, and that includes offering a hybrid powertrain for high-horsepower vehicles like the GTB. Electrification helps to produce a more fuel efficient vehicle, though that’s not always the point with these types of supercars—it also means gobs of instant torque directly off the line (courtesy of the electric motor) without sacrificing the sounds and feel of the internal combustion engine loved by enthusiasts.

The 296 GTB is a confusing moniker compared to other vehicles in Ferrari’s lineup. Foregoing a modern branding, the Italian automaker instead chose to combine the car’s total displacement (2,992cc) with its total number of cylinders (6), and slapped on the GTB branding to signify its purpose as a Gran Turismo Berlinetta—a grand touring sports coupe. More importantly, it won’t replace any existing models in Ferrari’s lineup, but will complement it by slotting between the mid-engine F8 Tributo and the Roma grand tourer.

Most traditional supercars—vehicles that are coveted for their sleek design, high top speed, and exorbitant price tag—are known for their high-revving, large displacement engines. With the GBT, the automaker took a more conservative approach with its powertrain, fitting the supercar with a smaller 3.0-liter V6 that it nicknamed “little V12.”

The sobriquet was earned thanks to the V6’s unique harmonics that resemble the soundtrack produced by the Italian brand’s naturally-aspirated 12-cylinder engines. This is, in part, attributed to the steeply banked 120-degree cylinders—an engine design feature more commonly seen in the Ferraris of the 1960s, but rarely in the cars of today. Such a layout produces minimal engine vibrations, an even firing order, and the ability to fit a pair of turbochargers between the cylinder heads in a “Hot-V” configuration for quick spooling.

The engine alone outputs 663 horsepower, which is a bit less than the previously-mentioned figure. But there’s a reason behind this discrepancy; the additional power is produced by an additional compact electric motor placed between the combustion engine and the eight-speed dual clutch gearbox. Ferrari calls this a “Motor Generator Unit, Kinetic” (MGU-K), and borrows the tech from its time in the Formula 1 racing series. The supplemental motor produces an additional 167 horsepower, bringing the total system output to 830 horsepower.

And if that seems like a lot of ponies, rest assured—it is. Thanks to the electric motor’s instantaneous torque, the Ferrari’s sprint from zero to 60 miles per hour takes just 2.9 seconds. Keep the pedal pressed and the car will continue its stampede, reaching 124 MPH in a mere 7.3 seconds. And that speedometer will keep climbing all the way past 205 MPH.

Surprisingly, the supercar can also be super efficient despite its humongous power output. When not mashing the pedal, the car can operate on battery power alone using the electric motor coupled to its 7.45 kilowatt-hour battery pack, which is relatively small when compared to, say, a Tesla Model 3, which offers 82 kWh of battery storage.

The Ferrari can still travel up to about 16 miles under battery-only power, and when depleted, the car will snap back to life with the internal combustion engine (ICE), transitioning seamlessly between electric and gasoline power using a clutch-based system it calls the Transition Manager Actuator. The ICE engine will recharge the battery pack (as will regenerative braking), or owners can simply plug the GTB into an outlet when they arrive home.

It’s not all about power though. The car’s undoubtedly saucy styling is a unique departure from Ferrari’s current design architecture. Designers drew inspiration from classic racers like the 1963 Ferrari 250 LM to sculpt the body and give the GTB a sloping Kammback tail. Large fender arches are complemented by a low-slung roofline and the entire car feels almost monolithic.

Perhaps the most noticeably intuitive feature is the active aero found between the rear tail lights. Ferrari says the 296 GTB is the first car in its lineup to use the LaFerrari-inspired movable aerodynamics to generate additional downforce in order to keep the car’s wheels planted when driven to its limits.

[Related: This Cadillac gets heavier the faster it goes—and that’s a good thing]

Inside the car are a number of smart features as well. A digital instrument cluster provides driver-focused data like the vehicle mode, state of charge, and navigation—all centralized around a large centrally-positioned rev-counter. A second display allows for a co-driving experience by replicating the tachometer and other relevant information about the car onto the dashboard, directly in front of the passenger. In standard Ferrari-fashion, all driver controls are centric to the steering wheel, including gear paddles and wheel-mounted turn signals. There are also a number of touch-sensitive surfaces to maximize the premium feel.

As for a price, Ferrari hasn’t yet announced one, though best estimates are calling for a base sticker price somewhere in the low $300,000s when it launches in 2022. The Prancing Horse doesn’t come cheap, after all.

The supercar will be competing against other high-end offerings like the upcoming Maserati MC20 and electrified McLaren Artura. But most importantly, it signals the future of Ferrari’s battery-rich portfolio.