The classic German sedan gets an exciting upgrade 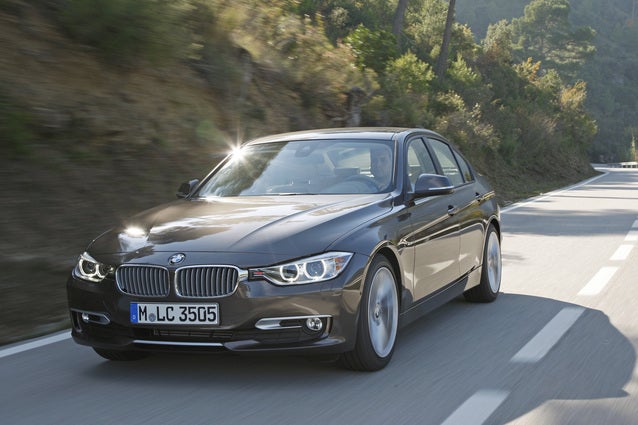 When BMW rolls out an all-new 3 Series, it’s big news, since these have been the benchmark of German sedans for the last 30 years or more. It also sets off a tectonic shift in the entry-level luxury market, with the Mercedes-Benz C Class, Audi A, not to mention the Cadillac CTS, Infiniti G and the Lexus GS suddenly called upon to step up their game to follow along.

This automotive war of attrition becomes a win for the consumer, as the arms race among the automakers gives the consumer a lot more choice. Really, who can argue with better, faster and safer cars every few years?

For 2012, BMW made the new 3 Series faster, more fuel-efficient and, to us, better looking in all respects. The 2012 model, BMW’s sixth generation 3 Series, has grown in size.

The 3 Series is a whopping 3.66 inches longer with a two-inch longer wheelbase. Also, BMW made the vehicle a lot wider — the front measuring 1.46 inches wider and the rear coming in at a booming Kim Kardashian-esque 1.85 inches wider. The 3 Series is kind of massive now — the size of an old-generation 5 Series — but, well, so are most Americans. That said, we like the size and think the 3 Series is still as nimble as a cat on a closely-cropped carpet.

To pull all that weight, BMW has rejiggered the base model 328i. Gone is the sweet-as-taffy naturally aspirated inline six-cylinder that powered countless BMWs and in its place is a new turbocharged four-cylinder engine that makes 240 horsepower and 260 pound-feet of torque — more power than the outgoing I-6 but with a higher EPA rating to boot.

BMW says the 328i’s 2.0-liter engine marks a return to the sedan’s early sporting roots — it was with a high-performance 4-cylinder engine that the BMW 3 Series made its debut back in 1975, with the first 6-cylinder engines making their first show at the 1977 Frankfurt Motor Show.

BMW calls their turbo technology TwinPower — not as in twin turbo, but twin power, which BMW says aims “to combine increased driving enjoyment with reduced fuel consumption and emissions.”

For those that want more power — and we at PopSci say bring it! — there is the 335i, a nearly bulletproof turbocharged 3.0-liter six-cylinder engine that makes 300 horsepower and 300 pound-feet of torque.

Both engines are offered with a new eight-speed automatic gearbox — a first in the segment — or a slick 6-speed manual gearbox. The consumer gets to choose how much they want that free hand to text.

We like that the 3 Series is now also available in a trifecta of variants — a Sport, Luxury and Modern Line, each with their own distinct trim and wheel packages. This seems to keep the mission creep of feature spec in check.

Also, the extra size looks good on the new 3 Series and goes a long way in creating a more refined and elegant profile for the car. To us, there is an overlap between the 3 and 5 Series models in terms of style and, well, class, which leaves room for the 1 Series, our favorite BMW of them all, to take the 2+2 sports car reins.

We really miss the inline six from the last 328. While the new turbo has more of everything — power, fuel efficiency — we live and die by the adage “there is no replacement for displacement.” That said, it wouldn’t take too much to get used to the new TwinPower Turbo. It just seems, well, different. Also, as you’ll see in the pricing section below, the options add up quick, creating a sense of sticker shock. Close to $50K for a loaded 335i seems pricey to us.

Some may also decry what happened to the old BMW, those small and nimble models from the days of yore. Well, those late ’70s models would crumple in an accident with an SUV and there would be no federally mandated active safety features to keep the family safe and sound. You choose if that is a good or bad thing.

We had a chance to flog both models on a long road drive and at the Laguna Seca racetrack recently and, to tell the truth, at about the sixth lap in, owning a new 3 Series made a lot of sense to us.

Coming full throttle into the “The Rahal Straight” at about 90 miles an hour in a six-speed manual 328i Sport model, we thought “How great would this car be even just sitting in traffic on the 110 freeway in LA?” It was then we mashed the brakes hard to set up for the Corkscrew, and started mentally working on a revised monthly savings plan.

Off the track, both the 328i and 335i performed pretty flawlessly. The eight-speed automatic thwacking between gears, the turbos off-gassing in a silent symphony under the sheet metal. Both models are five-tool players.

On the freeway and through the mountains outside of Monterey, California, both of the 3 Series models are every bit as capable as the previous generations. In fact, the extra width and length help to surpass them in terms of handling. Not losing their sense of nimbleness, the new models, even with the size difference, is balanced with a sense of play behind the wheel.

We like the new 328i’s engine a lot — its 240 horsepower is in line with the car’s weight and size, and there is virtually no turbo lag on either model. That said, it took a few miles to get used to a 328i with a turbo four, but such is life in the days when the OEMs need their fuel efficiency standards to rise each and every model year.

There is a reason that every other car manufacturer puts their premium sedan against the BMW. They are built like nails, run forever and drive like buttercream. The 3 Series is the benchmark, and, with the 2012 model, the mark just got raised just a little bit higher.