Meet the new fastest supercomputer in the world

It's more powerful than a million high-end laptops. 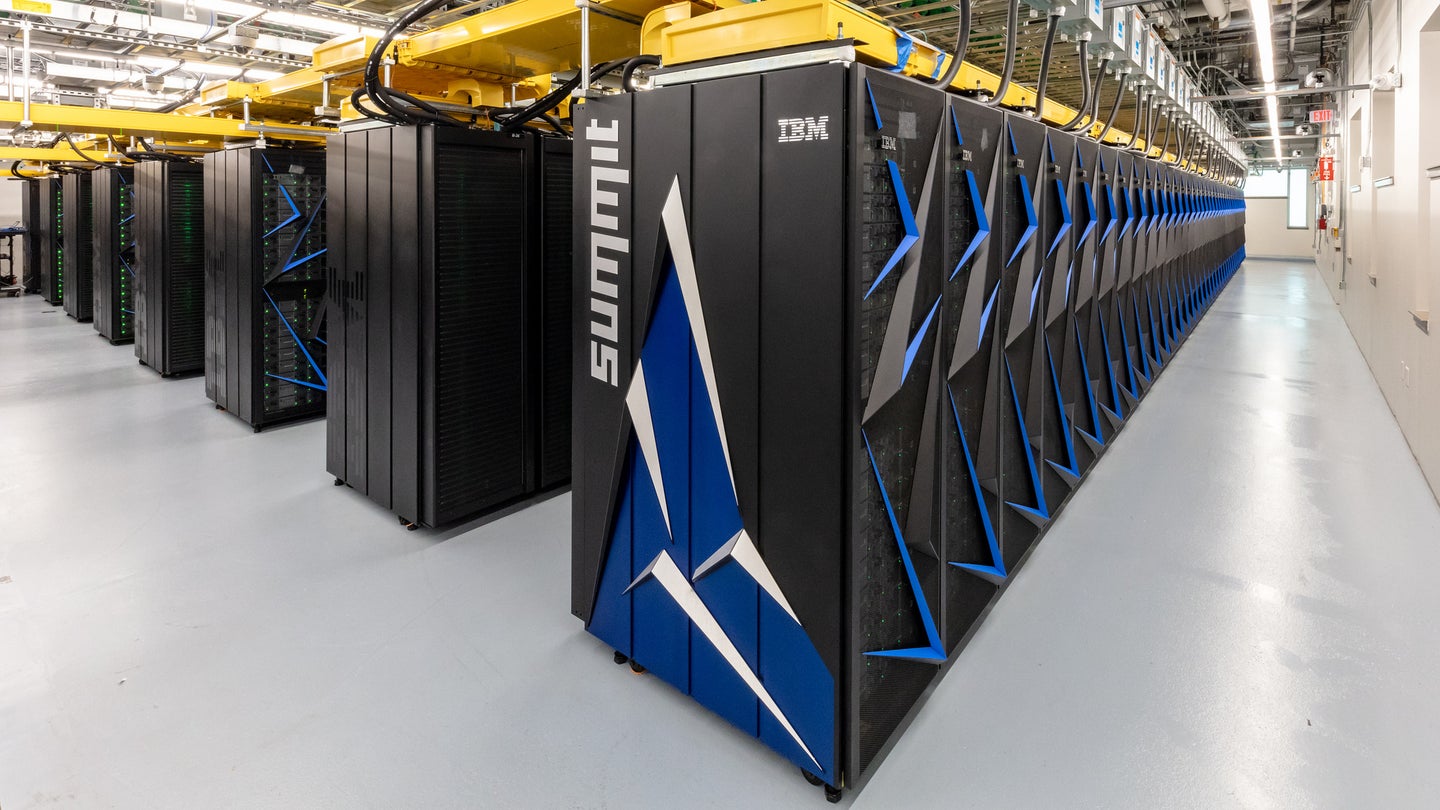 Later this month, when a ranking of supercomputers called the TOP500 comes out, the highest spot is expected to go to an American machine called Summit.

If you wanted to put Summit on your desk, you’d need a workstation that’s about the size of two tennis courts. That’s because this particular machine occupies 5,600 square feet of space. Its guts spread across more than 250 cabinets, each about the size of a refrigerator. And within the system is 185 miles of fiber optic cables, about enough to stretch from New York City to Providence, Rhode Island. (The official TOP500 list will be published on June 25, and Jack Dongarra, a professor at the University of Tennessee, Knoxville and one of the list’s authors, says via email that he expects this machine will come in first.)

Summit is already up and running at the Oak Ridge National Laboratory in Tennessee, where it doesn’t sit on a desk. It’s on a big concrete slab. Here’s how it works, and what it can do.

The brains of any computer is the processor. Your laptop, for example, might have a chip with two processor cores in it. Summit boasts 9,216 CPU chips. They’re IBM Power9s, and each of them has 22 cores, for a total of 202,752. Want to get even more granular? Each of those chips packs in 8 billion tiny transistors, bringing that grand total to 73,728,000,000,000. Besides those processors, Summit also has 27,648 GPUs, or graphic processing units, which are tightly connected with those other processors and ideal for running artificial intelligence calculations.

Hillery Hunter, the director of cognitive infrastructure at IBM Research, says that the machine is about one million times more powerful than a typical high-end laptop. And unlike a regular computer, this supercomputer is water-cooled—it uses about 4,000 gallons per minute to carry away the heat it generates. Its processing ability is rated at 200 petaflops.

So what’s the point of all this power?

This supercomputer will be open to researchers and won’t be used for classified government work, says Jack Wells, the director of science at Oak Ridge National Laboratory, Summit’s home. That means that university and laboratory staff, companies, and other government agencies, like NASA and NIH, can use it to carry out their research.

One potential use case is simulating complex events that happen in the natural world. Wells ticks off the kinds of things it can simulate: stuff like molecular dynamics, “earthquakes propagating through the earth’s mantle,” and “the abundance of heavy elements produced in a supernova simulation,” he says.

Besides running simulations, a machine this powerful is also good at crunching data that already exists, like analyzing the genomes—the genetic codes—of plants and animals.

In addition to simulating the complexities of the natural world, or human-made creations like nuclear reactors, Summit is also gifted when it comes to running the kinds of calculations that machine learning, and artificial intelligence, demand.

All those GPUs are tightly connected to the processors with what Hunter, of IBM, refers to as like a “superhighway.” GPUs are important in machines meant for high-end gaming—they render graphics on the monitor—but GPUs are also really good at doing the kind of math that AI needs.

“This machine will excel at AI [computing] because of the combination of its number-crunching capability with its data-moving capability,” Hunter says. In other words: those GPUs are great number crunchers, while the CPUs and the quick connection to the GPUs help move the data fast. “The other sort of magic that’s happening in Summit,” she adds, “is the ability to use big chunks of the computer—many, many GPUs, and many, many CPUs—to do a single AI calculation.”

So what’s the point of these AI abilities? “There’s fascinating capabilities that this machine will be able to do,” Hunter says. One of those is studying cancer, and carrying out analysis of prior treatment regimes. Another is analyzing information from radiology. Or, it could also try to “understand genetic factors that contribute to certain types of addiction,” she says. And if all of that falls through, just think of all the Bitcoin it could mine.