Putting the Ferrari FF Through Its Paces, High in the Italian Alps 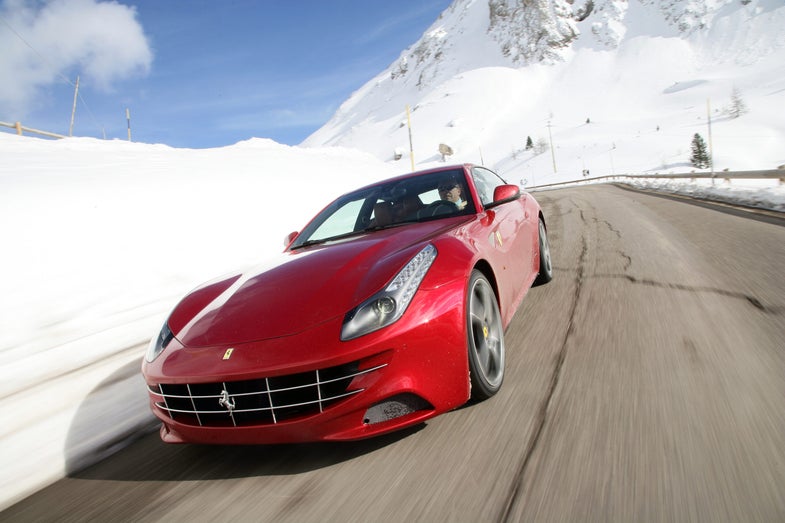 Brunico, Italy – A snowy K-Mart parking lot would have worked fine. But this being Ferrari, and the star its tradition-shredding FF – a $300,000 all-wheel-drive station wagon — a little high-altitude showboating seemed in order. So with a boost from the Italian army’s Chinook helicopters, Ferrari flew a pair of FF’s to the windswept peak of Plan de Corones, a popular ski resort in its wondrous Dolomites, and told us to have at it. Ridiculous? Why, yes. But no more so than a 208-mph, 651-horsepower Italian pony that can carry four tall adults and cargo while galloping safely over snow, ice, dirt or puddles on the Pomona freeway.

Take a closer look at the Ferrari FF

A press of the red “start” button on the racing-style steering wheel and the FF’s 6.3-liter V-12 dramatically fills its lungs. With Raffaela de Simone — just 30 years old, but already a 10-year veteran Ferrari test driver — riding shotgun, I tiptoe around the carved-out snow course, leaving the steering wheel’s tiny manettino lever in its Snow/Ice setting. It’s the most vigilant of five performance envelopes, including Wet, Comfort, Sport and ESC Off, the latter disabling all traction and stability systems. I leave that setting for Raffaela’s expert hands, as he rips around this fantasy half-pipe with Olympian daring, casually explaining the car’s systems in Italian-spiced English.

“If we see that electronic systems may help the car, we develop them; if not, we don’t,” he says, demonstrating by hurtling sideways and blasting roostertails of snow from the 20-inch Pirelli Sottozero tires.

On this slippery surface, any help is appreciated: You’d expect this beast to be all white knuckles, but I quickly realize that an anxious grandmother could guide the FF, and quickly, through a howling snowstorm. Any clumsy throttle stab or steering-wheel jerk is instantly smoothed over, at nearly Lexus levels of protectiveness; spins and slides are electronically denied. The critical role of those optional winter tires can’t be overstated. For tearing it up in the dry, the peerless new Michelin Pilot Super Sports are standard.

Within two laps, I’m confident enough to venture up to Sport mode, using the throttle to rotate the FF around corners like a Camaro-lovin’ teenager. Yet the trusty stability control still reels me in when it senses the teenager might lose it into a snowdrift.

Like much of the car’s technology, the manettino descends from Ferrari’s Formula 1 racers. Consider it the nerve center of a human-machine interface in which every driver input and road surface condition – good, middling, potentially disastrous — is sensed, analyzed and reacted to.

The manettino also controls the third generation of Ferrari’s magnetorheological suspension system, a technology first seen on the Corvette. An electronically controlled magnetic field adjusts the viscosity of metal-filled fluid within the shock absorbers. The system monitors the road surface and handling forces, and can vary shock stiffness every millisecond.

And now, a single CPU melds and masterminds Ferrari’s patented 4RM four-wheel-drive system; its ever-improving dual-clutch, seven-speed F1 gearbox; and the F1 Trac traction control and E-Diff electronic rear differential that estimate grip in real time to deliver maximum, crushing power to the pavement. Or, in my case, to several feet of packed alpine snow. 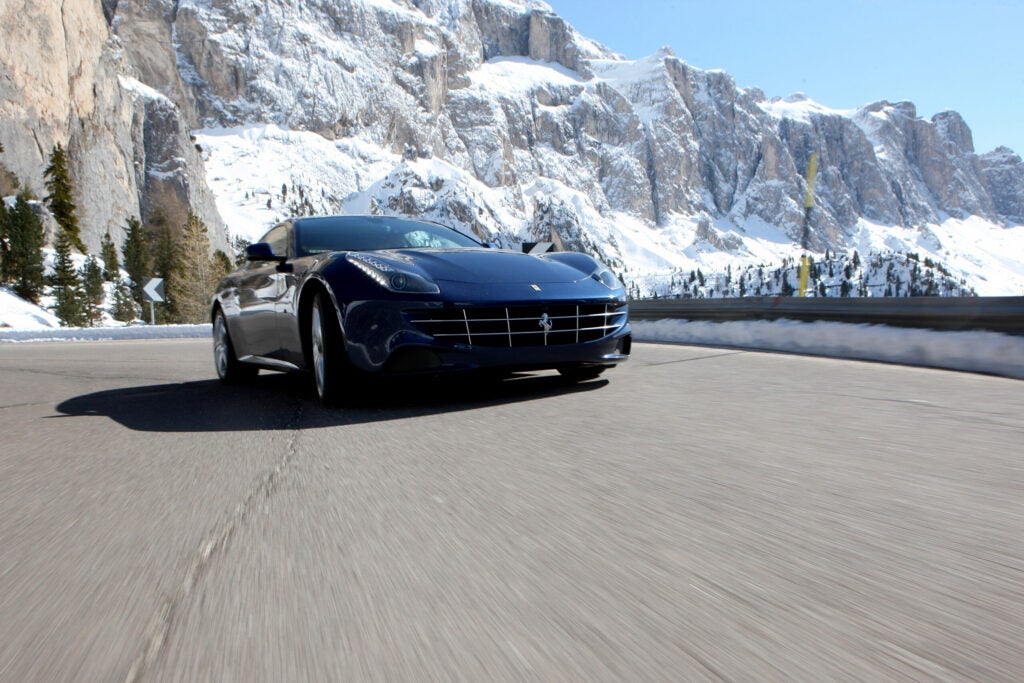 Ferrari FF: Round the Bend

The FF stands for “Ferrari Four” both for its four-wheel-drive and its four beautifully wrought (yet somewhat unyielding) seats. What Ferrari bills as the world’s most powerful four-seater is the successor to the largely unloved 612 Scaglietti. And the front-engined FF is the largest, heaviest Ferrari. This two-ton, V-12 gran turismo stretches past 193 inches, barely shy of the similarly hatchbacked Porsche Panamera and Aston Martin Rapide.

Like its less-costly German and British rivals, the Ferrari’s arrival advances the trend toward roomier, more-practical performance cars, regardless of price. Yet a skeptic might still question the world’s crying need for a do-it-all Ferrari: If this kind of kingmaker needs the space that day, why not grab the Range Rover, BMW 7-Series, or another of the half-dozen cars in his travertine-floored garage? But only about 800 FFs will be produced in Maranello this year, with 200 U.S.-bound and spoken for, so that question is moot for now. And far more than traditional, two-plus-two GTs, the Ferrari does allow four full-length adults to share the high-speed adventure and valet-line glory. That back seat is roomier and more reachable than the Aston’s, but tighter than the Porsche’s. Behind those seats, gift-wrapped in sensuous semi-aniline leather, there’s nearly 16 cubic feet of cargo space – on par with a VW GTI or other compact hatch – and about 30 cubes with rear seats folded.

Yet where the Porsche and Aston are sort-of-sedans, the Ferrari is a bona fide shooting brake. That’s a somewhat faded British term for bird-hunting, estate-roaming cars, including older Astons and Bentleys, which are essentially two-door station wagons.

The FF’s Pininfarina design takes several days and a few deep breaths to get used to, but this is ultimately a dominant, defiantly handsome machine, especially its knockout rear three-quarter view. Sure, the basic layout recalls the old BMW Z3 coupe – along with shooting brakes of yore — but all similarities end there.

Like all recent Ferraris, the FF’s wind-cheating body wraps around a rigid aluminum spaceframe, here using 23 types of alloys in its lightweight nodes, extrusions and castings.

The FF is no featherweight, but still weighs nearly 1,000 fewer pounds than Bentley’s rival Continental GT Supersports. Power-to-weight ratio actually tops Ferrari’s formidable 599 GTB. Nestled behind the FF’s grinning lothario face, the new direct-injection V-12 allows a lofty 12.3:1 compression ratio, 504 pound-feet of torque, and 8,000 wailing rpm. Call upon the computerized launch control, and the FF hooks up all four tires and churns to 60 mph in 3.7 seconds, its hydroformed exhaust emitting the classical V-12 baritone that helps justify the price. 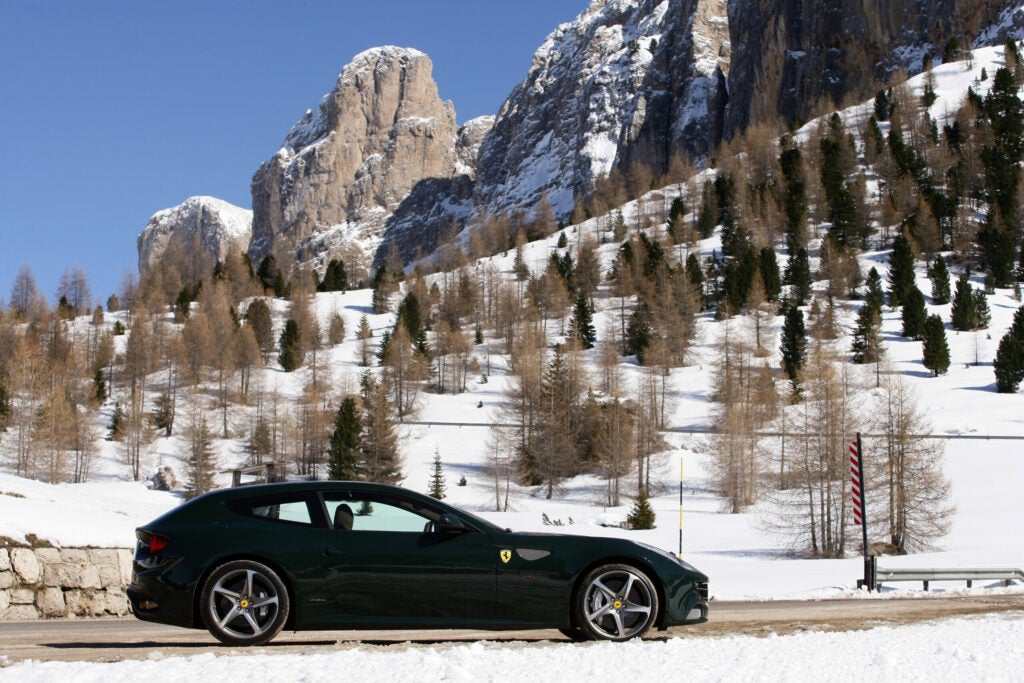 Aesthetics aside, the Ferrari seeks to overwhelm the Porsche and Aston with salvos of power, technology and pure Italian sensation. And it’s the Ferrari’s switcheroo of an all-wheel-drive system that takes the technical cake. The very idea of an AWD Ferrari sparked some wailing, but purists can dry those tears: The Ferrari strives to operate exclusively as a rear-drive car, until its predictive algorithms sense that rear wheelspin or vehicle yaw can’t be stopped. Only then will the Ferrari send up to 20 percent of its engine torque up front to let the FF keep hammering.

So instead of a traditional AWD system – with an engine sending power rearward along a driveshaft to the rear transmission, through a center differential, and then to front wheels through a secondary driveshaft – the Ferrari does away with any weighty, space-hogging mechanical linkage between front and rear axles. There’s no center differential. No long, space-hogging secondary shaft.

Ferrari’s patented 4RM system begins by shoving the entire engine behind the front axle line, itself a boon to vehicle balance. In addition to the seven-speed rear gearbox, a separate gearbox with two forward speeds mounts ahead of the engine, drawing power directly from the crankshaft. That Power Transfer Unit (PTU) features a pair of wet multi-plate clutches that independently vector torque to either front wheel as needed, set in motion by electronic commands. Those carbon-fiber-lined clutches slip have their own dedicated cooling circuit to keep temperatures in check.

The elegantly compact PTU is just seven inches long and weighs less than 90 pounds, 50 percent less than conventional AWD. And with Ferrari refusing to sacrifice its historic poise at the handling limit, the technology reverses the understeer-prone, front-weight bias of AWD cars: The Ferrari keeps 53 percent of its weight at the rear, 47 percent up front.

If the FF should scrabble for grip in the main transaxle’s first or second gear, the front transmission engages its own first speed to feed in torque. Lose traction in third or fourth gear, above roughly 115 mph, and the front gearbox selects its corresponding second speed. (That gearbox has a reverse function as well). And at supra-legal speeds above 130 mph – whether in fifth, sixth or seventh gear — the rear wheels can handle the full monty of available torque, so front clutches remain open and no power is transferred. Simple, right?

King of the Slopes

Taking the gondola off our mountain playground, we enlisted the FF as our fast-paced tour guide through this largely German-speaking Südtirol region — including a memorable two-laner that narrowed to a virtual goat trail as it ascended to the clouds through Sound-of-Music scenery. (That cliff-hanging road was a happy accident, the result of the Ferrari’s maddeningly impenetrable navigation system). Back on course, we slalomed through the famously pink-hued Dolomites, at one point gunning beneath skiers whose steep run spanned the asphalt via a man-made bridge. And firing off gear changes via the paddle-shifted transmission – a bit less neck-snapping than in the more-hardcore, mid-engine 458 Italia — we skirted the mammoth Marmolada, the tallest peak in the Dolomites, which held Italy’s northern border with Austria prior to World War One.

An optional HELE system (for High Emotion/Low Emissions) adds a conscience-soothing engine stop-start system, along with a stingier fuel pump, AC compressor and other items. Ferrari says that the FF will top 15 mpg and emit 360 grams of CO2 per kilometer – relative bragging points, certainly, but 25 percent better than previous V-12 Ferraris, despite 20 percent more power.

The FF, of course, works up a meaner thirst during high-intensity workouts. Wanting to give the Ferrari room to stretch its muscular legs, I descended one last, fast set of switchbacks to meet the wide-open autostrada, placing full trust in the FF’s standard carbon-ceramic brakes. Here were the rolling hills and long sweepers the FF was born to conquer. Strafing Italy’s autobahn for an hour at up to 170 mph, I eased into a truck-stop station to quench the FF’s echoing, 24-gallon tank – and was handed a bill for $160 worth of vintage Italian unleaded. Scuzzi?

Shaking off that $8-a-gallon assault, I considered that the same fill-up here in America would now nudge $100; the kind of number that can make even enthusiasts crave a side dish of mileage with their performance main course.

As for that performance, Ferrari engineers and executives took pains to position the AWD system as strictly a sixth man. Yet those front wheels can help shave about 0.3 tenths of a second from the FF’s 0-60 time during a launch-control start. And near day’s end, the FF showed why four wheels can sometimes beat two, not only in foul weather: Blasting out of a corner, I hit a chunked-up patch of asphalt, and felt the back end twist aside. Before I could blink, a dashboard icon did it for me, power shifted subtly to the front tires – and the FF hunkered down and sped away. (Inexplicably, the digital readout that alerted me to the front wheels’ activation won’t be included on production models).

Since the Ferrari stays resolutely neutral through corners, with nary a hint of all-wheel-drive understeer, a little socialist spreading of the Italians’ V-12 wealth is nothing to be ashamed of.

That’s especially true when you consider the upside: A Ferrari that will part the crowds, but won’t need to hide in the garage when the clouds part. That makes the FF one unusual, yet versatile tool for the ultra-rich: Open it up, carve corners and turn heads, and you’ve got the ultimate arrival tool at ski resorts from Aspen to the Alto Adige. 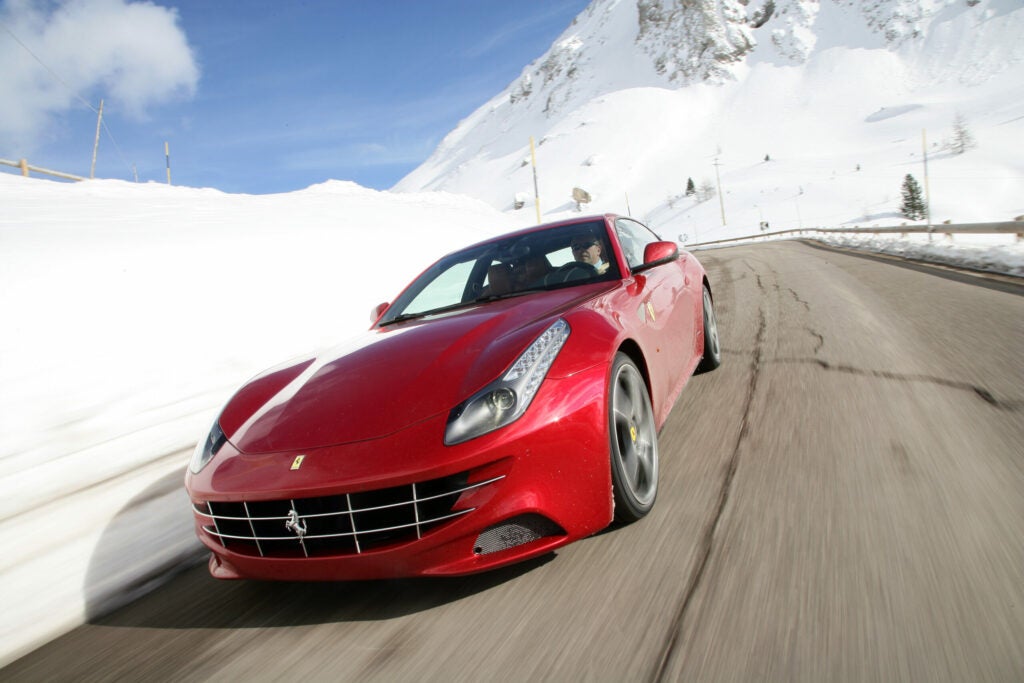 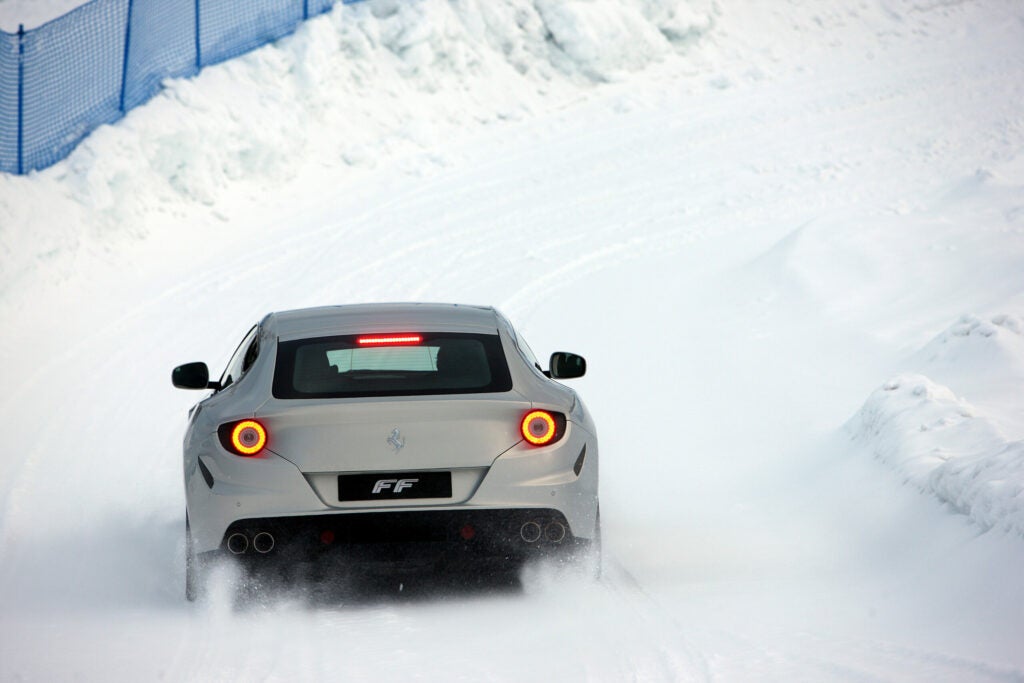 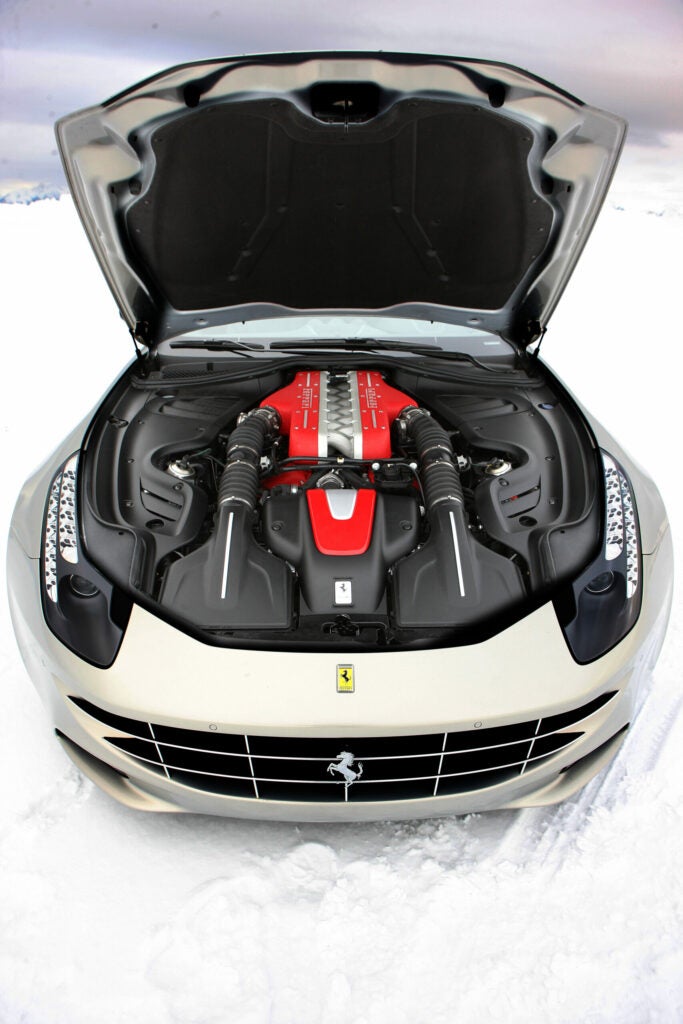 Ferrari FF: Where the Horses Live 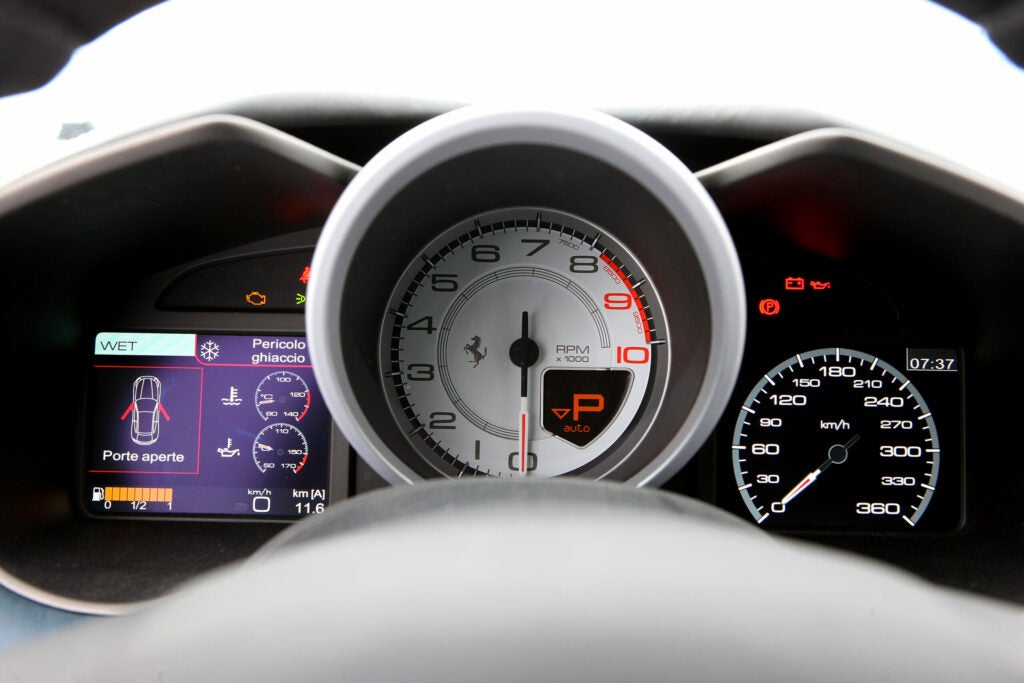 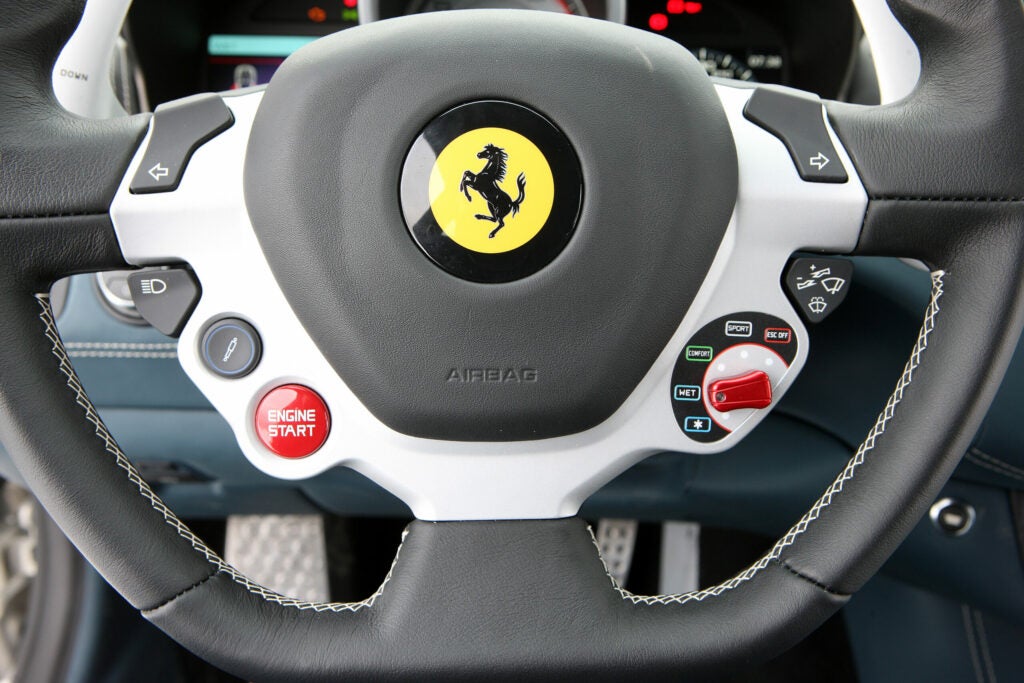 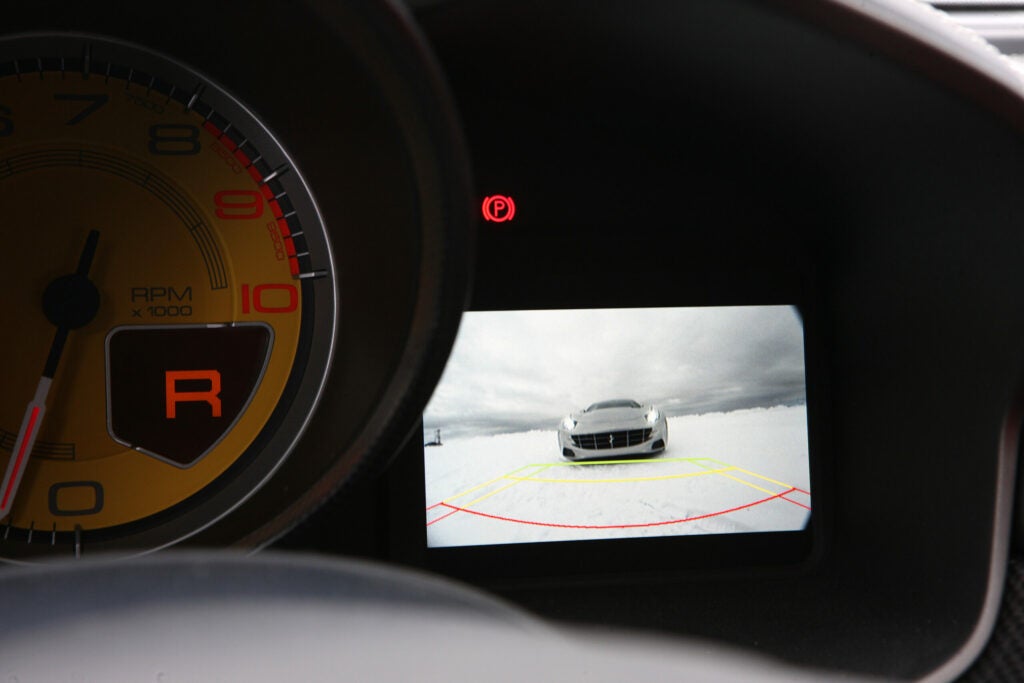 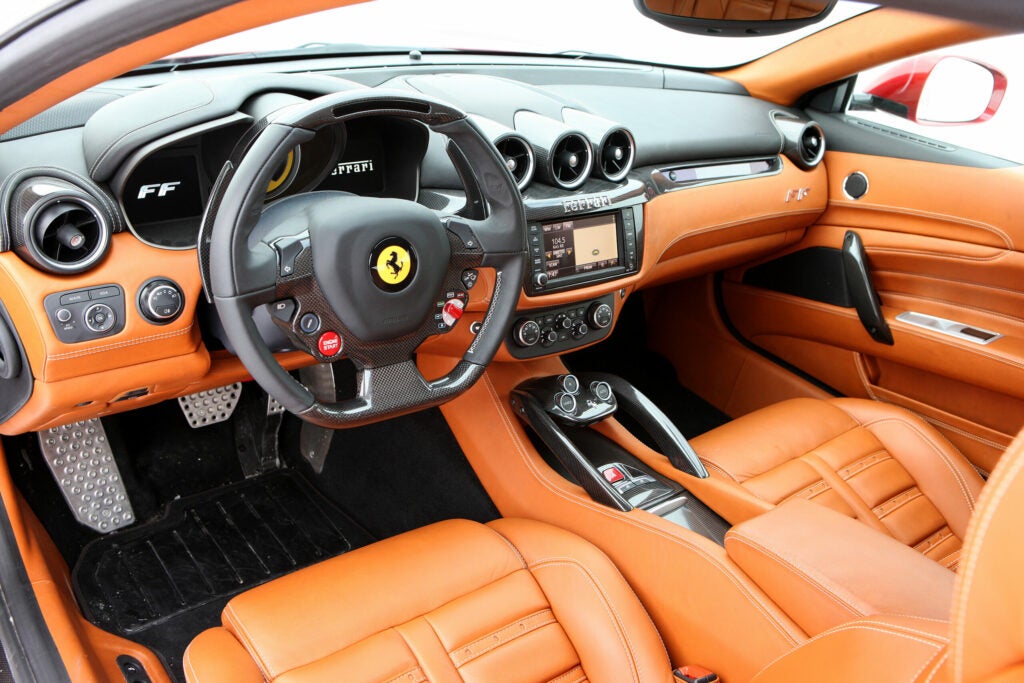 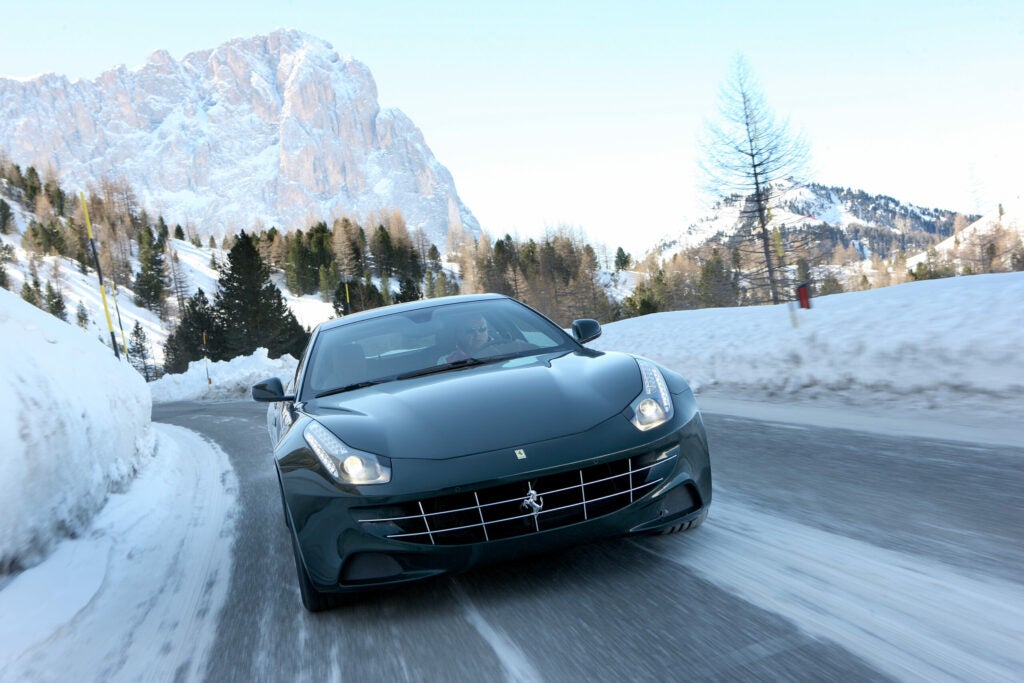 Ferrari FF: Round the Bend 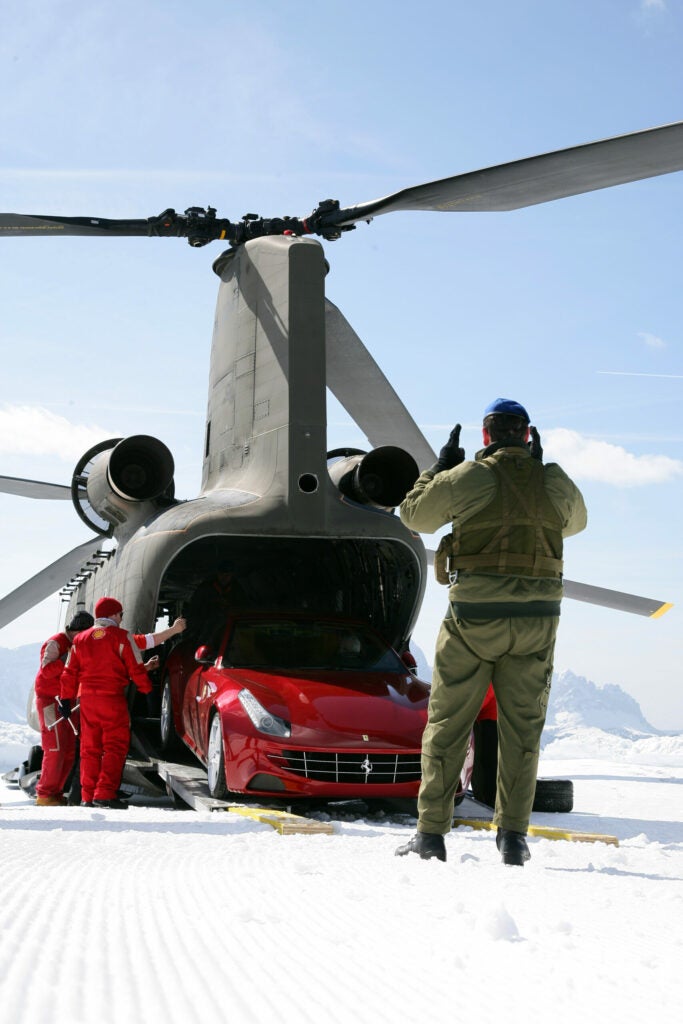