Behind the wheel of McLaren’s hot new hybrid supercar, the Artura

The plug-in hybrid supercar represents McLaren 2.0. Here's what it's like to drive. 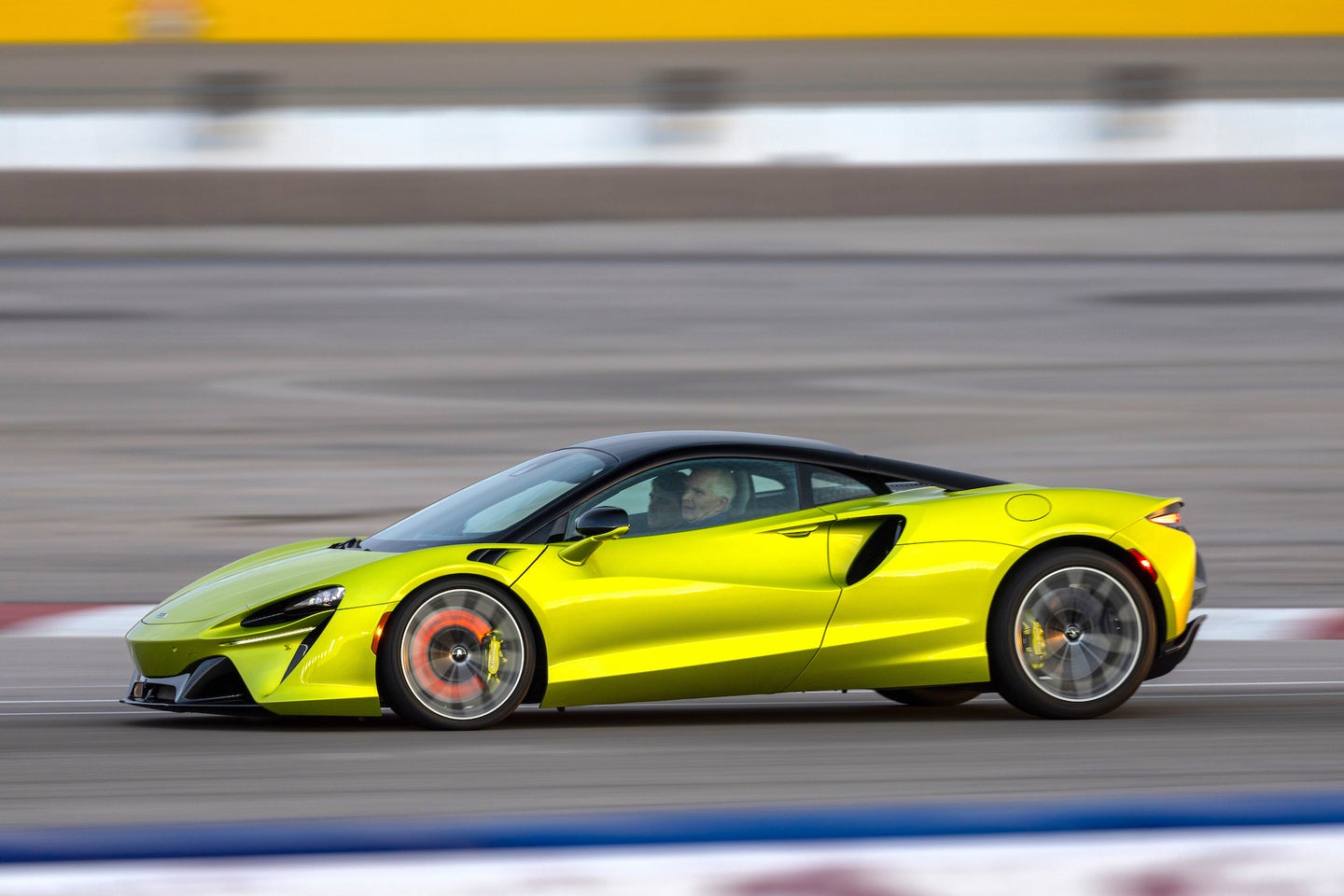 Since the launch of its unfortunately named MP4-12C sports car in 2011, McLaren Automotive has built every vehicle using a version of the same carbon fiber chassis and V8 engine. A decade later, McLaren is launching version 2.0 of the company’s product line, with a new hybrid-electric V6 powertrain bolted into an all-new carbon fiber chassis tub structure.

The vehicle embodying this change is called the Artura. It is McLaren’s first production hybrid and it signals the direction for the rest of the company’s products. Their very first hybrid was the limited-production P1 hypercar, and the Artura shows how this technology has trickled down to more mass-produced models.

Shredding the curves and catapulting down the straights of the infield road course at Las Vegas Motor Speedway, the $289,000 (as tested; base price is $233,000) Artura convincingly upholds the legends of Mika Hakkinen, Ayrton Senna, Alain Prost, Emerson Fittipaldi, and other famous drivers who’ve piloted McLaren Formula 1 cars to world championships.

The howling turbocharged V6 engine would have been right at home in Prost and Senna’s ‘80s turbo-era McLarens, though at 3.0 liters, the Artura’s engine is double the size of the power plants in those old race cars. Senna would have envied the alacrity of the Artura’s shifts in comparison to the H-pattern transmission of his F1 car at that time.

Impressively, despite the wholesale change of hardware, McLaren has managed to preserve the feel that the Artura is still a McLaren. The bodywork is born of the same family as existing models like the 720S, the cockpit feels similar, and the driving dynamics put me right into a McLaren frame of mind.

This new carbon fiber platform is even stiffer and lighter than the one the company has used previously in vehicles like the 600LT or 720S, thanks to an additional decade of know-how. More importantly, it is made from 72 pre-formed sections of carbon fiber rather than the 500 separate pieces used by technicians previously. This reduces the variability and accelerates the manufacturing process. “We’ve had a big reduction in the hours needed to make it,” reports chief engineer Geoff Grose. “It is a more consistent process than with human intervention.”

The Artura’s new M360 engine is a V6 arranged with 120 degrees between the two banks of three cylinders. Sixty degrees is the norm for clean-sheet V6s. (V6s created by slicing two cylinders off a V8 are 90-degree engines, but those require balance shafts to offset their inherent imbalance.) For the next generation of its engines, McLaren has gone to a much flatter 120-degree V-shape that mounts the turbochargers inside that shallow valley atop the engine rather than on the outside as is normal practice. This contributes to a lower center of gravity for the Artura, which lets the car change direction more easily.

This engine is made as small as possible by the use of 3D printing to create the sand cores used to cast its block and heads. The features inside this engine are too small to create by conventional techniques, according to Grose. “It allows the shortest possible gaps between the cylinder bores, just 2mm,” he says. “That is a really tight, thin core. This 3D printing technology is really good for enabling that.”

Computer optimization modeling apparently points to this 120-degree turbo V6 engine layout, as it is the same arrangement Ferrari reached for the 296GTB, that company’s analog to the Artura. This combustion engine churns out 577 horsepower and 431-lb.ft. of torque.

[Related: Why plug-in hybrid-electric vehicles are worth a look right now]

This electric motor produces 94 horsepower and 166 lb.-ft. of torque, with the e-motor’s torque contribution coming at the lower end of the combustion’s torque curve. The result is a peak of 671 hp and 531 lb.-ft. in combined output. More importantly, the duo’s combined torque delivery is nearly constant from low rpm, so the Artura accelerates out of turns more like an electric car.

Together, the electric and gas motors push the Artura to 60 mph in 3.0 seconds and across the quarter mile in 10.7 seconds. The EPA Miles Per Gallon Equivalent rating is 39 MPGe, thanks to the plug-in hybrid’s battery. The big improvement over the Artura’s 18 mpg when running on gas only illustrates how the plug-in system not only fortifies low-speed power for acceleration, but also delivers fuel-sipping efficiency.

The Artura clicks up through the gears seamlessly thanks to its eight-speed dual-clutch transmission. The computer can do these shifts for you, or you can click the steering wheel-mounted shift paddles. Ferrari and Lamborghini fix the paddles to the steering column so that they are always where the driver expects them. In McLarens they turn with the steering wheel, like they do in race cars.

However, the steering wheels on race cars never turn so far that the driver has to reposition their hands, so they can always click up with the right paddle and down with the left.  Street car steering wheels, on the other hand, crank through a couple turns from one side to the other, leaving the driver with no idea where the shift paddles are when turning. However, it is unusual to do much shifting while turning so much, so maybe this quirk doesn’t really matter.

The transmission is all-new, with eight speeds in place of the previous seven. Some of the extra space for the added gear came from the elimination of the reverse gear. Now, the Artura just spins its electric motor the other direction to move the car backwards. The car has an electric-only top speed of 81 mph, so in theory, the Artura would be able to go up through the gears to reach that same speed while going backwards, but I did not test this theory. The EPA says it will go 11 miles on electric power alone.

Overall top speed is 205 mph, which also went untested because there is no space for such velocity at Las Vegas Motor Speedway and no permission for such speed on the wide-open desert roads in Nevada where the car could actually achieve terminal velocity. Hunter S. Thompson would likely have pumped the Artura’s tires up to 80 psi and given it a go (as he claimed to have done with his Cadillac in Fear and Loathing in Las Vegas), but I have a stronger aversion to breaking the law than he apparently did.

You’ll know all about the Artura’s tire pressure because the car’s new Pirelli P-Zero Corsa tires have pressure sensors embedded into the tires themselves rather than mounted on the wheel at the fill valve. This allows a more accurate measurement, according to McLaren, letting the car understand when the driver has intentionally reduced tire pressure for more grip while driving at the racetrack. This prevents the computer from giving low-pressure warnings when the driver has intentionally lowered the pressure.

McLaren has preserved its hydraulic power steering system for the Artura, eschewing the electric power steering others use for the superior steering feel provided by a hydraulic system. Because the combustion engine switches off at times, the hydraulic pump is electric-powered so the steering doesn’t care what the engine is doing.

Speaking of turning, you’ll need to slow the Artura down from time to time, and McLaren continues to set the industry standard in brakes. While Lamborghini’s carbon ceramic brakes are comfortable to drive on the street, they get vague and imprecise on the track. Other brands like Ferrari and Porsche deliver on the track, but their carbon ceramics are grabby and squeak embarrassingly in street driving.

In contrast, McLaren’s carbon ceramics are angelic on the streets and devilishly good in the brake zones where you hammer the brake pedal just for turns, exhibiting exemplary behavior in everyday driving and delivering the confidence-inspiring precision and consistency needed to light up the front rotors on my Flux Green track test car. Truly, the best performance in both situations.

McLarens are also known for their ability to deliver both an unexpectedly posh ride in street driving with crisp handling response in mountain switchbacks and the race track. That’s courtesy of the company’s Proactive Chassis Control system of cross-linked hydraulics that uses wheel motion on one side of the car to help manage what happens on the other side.

Instead of that Proactive Chassis Control system, the Artura features Tenneco’s Proactive Damping Control shock absorbers, which are like the computer-controlled active shock absorbers everyone else uses. The Artura is the starting point of McLaren 2.0, so look for Proactive Chassis Control to appear on other models built on the Artura’s new chassis and drivetrain in the future. The Artura’s more commonplace shocks don’t deliver the best-of-both-world’s experience of smooth ride and crisp handling that we’ve come to expect from other McLarens, but pricier future variants surely will.

While the exterior bears a family resemblance to other McLarens, the aluminum skin is “superformed” with a blast of hot air rather than stamped by conventional dies. This permits the car’s crisp character lines and the precise body gaps. My street test car was sprayed in a striking shade called Ember Orange, which was challenging to make practical for mass production, according to Head of Colour and Materials Design, Jo Lewis. It was worth the effort she put into getting Ember Orange from her computer screen to the production line.

Likewise, all of the McLaren 2.0 upgrades are clear successes. The Artura shows that it is possible to preserve continuity without being stuck in the past, as this car delivers the contemporary technology and performance supercar buyers demand.