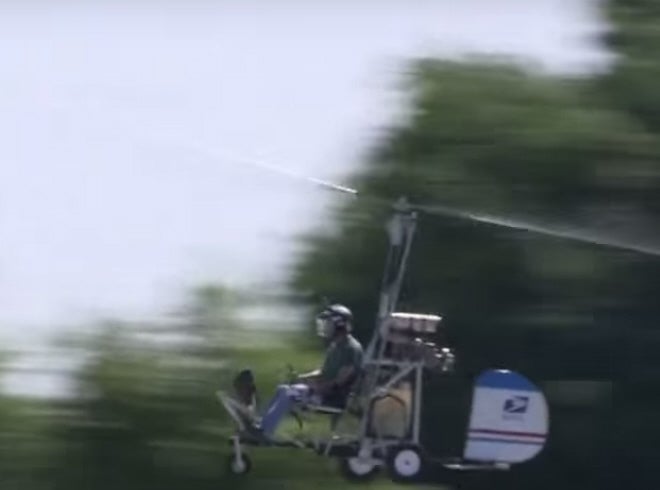 On April 15th, 2015, a strange vehicle came from the sky and landed outside the Capitol of the United States in the heart of Washington, DC. Pilot Doug Hughes, who drove his gyrocopter up from Florida before flying it onto the Capitol lawn, wanted to call attention to corruption in politics. The stunning flight and arrival of the novel ultralight helicopter-like plane also caught the attention of the North American Aerospace Defense Command (NORAD), the people tasked with guarding the skies of America from hostile threats. Their challenge: can radar accurately detect a plane as small and slow as the gyrocopter flown by Hughes?

In an exercise entitled Falcon Virgo 15-13, NORAD flew four ultralight aircraft, including gyrocopters, in the airspace around Washington, DC, this past Sunday. Falcon Virgo is a long-running series of exercises to test interception and airplane identification techniques; there was one, Falcon-Virgo 15-07, conducted less than two weeks before Hughes’ flight, with F-16s, a Gulfstream jet, and Coast Guard helicopters flying in the area. Radar is very good at detecting large aircraft. But it has problems with smaller vehicles, which sometimes appear like birds or balloons. this was the case for Hughes, who showed up on FAA radar, but just as a small blip. At a congressional hearing about the gyrocopter, FAA Director Michael P. Huerta and the U.S. Navy’s Admiral Bill Gortney testified that the slow, low, and irregular flight of the gyrocopter appeared as either a weather system or a flock of birds.

In May, NORAD ran another exercise “intended to assist in calibration of systems and equipment, and training, and will serve to refine and improve our ability to respond to unknown and potentially threatening aircraft,” where they flew a Beechcraft airplane at 3,000 feet above the ground in the airspace near DC. The enduring fear is that someone could fly a gyrocopter like Hughes’, or a small drone, and get close to the Capitol and do harm before being stopped.

Better radar that can detect small things moving deliberately is certainly one way to mitigate that risk. Another might be understanding just how little risk there is in the scenario itself: Hughes stopped on the lawn, and was tackled by police before he could deliver the letters he intended to bring to Congress. The gyrocopter worked great for a publicity stunt, but despite its novelty, it’s far less efficient or discreet than many weapons available to those seeking a means for terrorism.