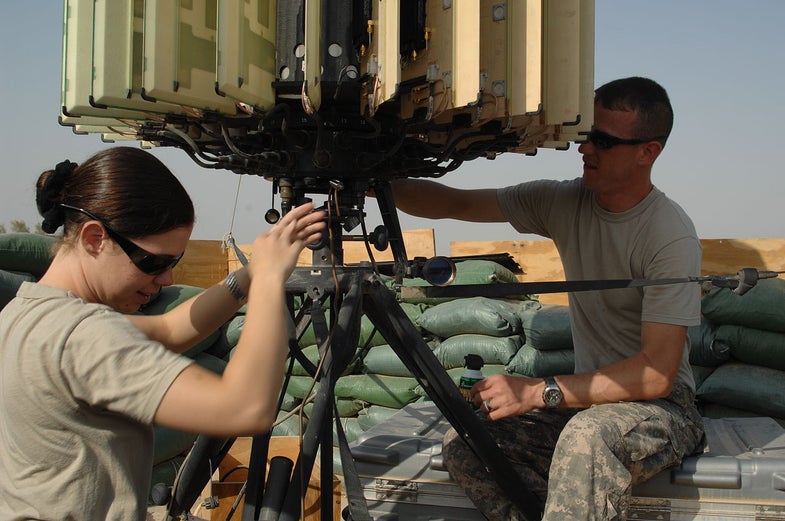 For decades, infantry’s problem with planes has been that they’re hard to reach because they’re far away. Anti-aircraft weapons must be used to keep bombers and fighters from striking at troops on the ground with impunity. Now, the Marine Corps is finding a challenge with a new sort of airplane: small drones, which fly close to the battlefield, but are hard for traditional anti-air weapons to detect or hit. To counter this threat, the Marines are turning to a new tool: anti-artillery radar.

When ISIS or other insurgent groups fly drones, they don’t have larger plane-sized craft like Predators and Reapers. Instead, they use smaller, commercial models, adapted as remotely piloted scouts or hand-tossed reconnaissance. These drones are too small for normal plane-detecting radar to spot, but the Marines have other radars available.

Four feet wide and four feet tall, the AN/TPQ-49 Counterfire Radar can watch over a 121-square-mile area. In its original use, it scans for rockets, artillery, or mortar fire, and then feeds those coordinates to troops so the marines can use their own artillery to fire back. Because the counterfire radar is used to tracking small projectiles, the Marine Corps Warfighting Lab hopes it can be adapted to tracking drones. According to the Marine Corps Times, L.K. Philips, head of the lab’s Aviation Combat Element, said “he believes it could also track UAVs and even show their launch location, enabling a strike against the drone or its operators.” A federal solicitation for spare parts for these radars notes the “computer-controlled signal processing of the radar signal data to perform target detection, verification, tracking, and classification of enemy and friendly mortars.”

Once enemy drones are located, there’s a few ways the Marines could go about taking them down. They could borrow from South Korean, French, and Dutch research, and use counter-drones of their own armed with nets to disable the enemy scouts. Or they could just fire a ton of machine guns at them.