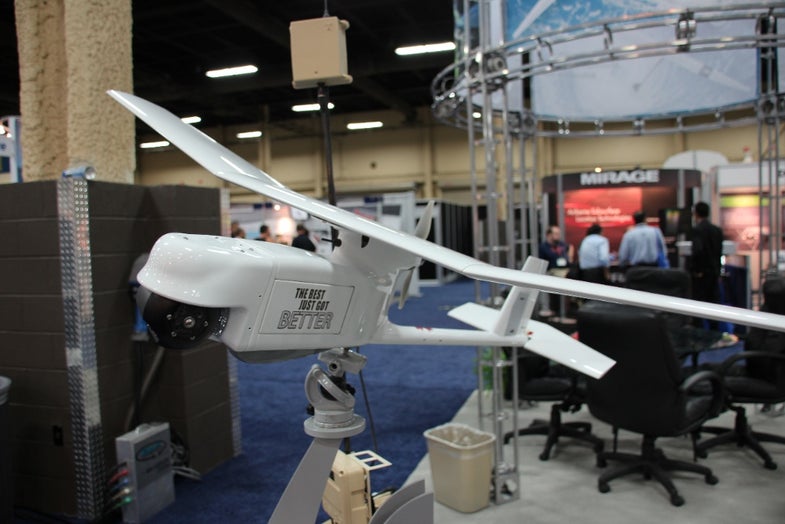 If you want to know what the future looks like, sit down and have a talk with Roy Minson. He’s the senior vice president and general manager of unmanned aircraft systems at Aerovironment, the manufacturer of nearly 85 percent of the Department of Defense’s unmanned aircraft fleet–not the Reapers and Predators that so often make headlines, but small aerial systems that make up the vast majority of the DoD’s 7,000 strong unmanned aircraft fleet. That is to say, business with the defense sector is good at Aerovironment. But today Minson is talking almost exclusively about non-military applications for the company’s hardware–him, and just about everybody else at the nation’s largest robotic systems show.

That’s partially because I’m peppering him with questions about civilian drone applications, but our conversation was bound to wander in this direction. The DoD certainly isn’t going anywhere, but defense spending cuts hang over this place like the sword of Damocles. The term for next year’s mandated defense spending cuts, “sequestration,” can be overheard around the exhibit hall here at the Association for Unmanned Vehicle Systems International’s annual North American trade show like some kind of new and derogatory slang.

But even as Congress prepares to twist the Pentagon’s money spigot down to a trickle, it tossed the unmanned systems industry a bone earlier this year by mandating that the Federal Aviation Administration integrate unmanned aircraft–first small unmanned aircraft systems (UAS), but eventually larger ones as well–into the domestic airspace by 2015. First responders can already obtain clearance to operate small drones. And as a result, the tenor of the whole conversation here has shifted.

What will America’s drone-enhanced future look like?Defense is still the overarching theme at AUVSI, but people are talking a whole lot as well about local law enforcement, public safety, site security, forestry, pipeline inspection, mining operations, infrastructure safety, border security, oil and gas exploration, farming, and countless other potential applications for unmanned systems here at home. The civilian market for domestic drones is opening up, and a high-tech industry in need of a customer is stepping into what was previously a void–at least in the United States.

“We’re looking forward to addressing the civilian and public safety sectors,” Minson says, echoing what I’ve heard from just about every executive, engineer, or PR rep I’ve sat down with for the past few days. Minson describes the range of ways Aerovironment’s small UAS have served in non-military roles outside the U.S.–tracking animals for wildlife agencies, guiding ice breakers in the Arctic, monitoring for airborne radiation in Japan in the wake of the Fukushima nuclear disaster–and how feedback from those roles has informed the company’s thinking on non-military applications.

It’s a common thread here. A range of companies I spoke with–most of them defense companies in the popular consciousness–have been exploring applications beyond the military in countries that, by industry standards, aren’s as woefully behind the curve on unmanned systems regulations as the United States. Names like Rockwell Collins, Lockheed Martin, Boeing, and Honeywell, as well as a hundred more smaller firms you likely haven’t heard of (yet).

Entire states (or their top aerospace universities) have shown up–Ohio, North Dakota–to throw their support behind the industry and demonstrate their desire (often in the form of educational and economic incentives) to grow the unmanned systems sectors within their borders. I sat down with the state of Oklahoma’s Lt. Governor Todd Lamb and its Secretary of Science and Technology Stephen McKeever for a quick conversation about the role of government in this new economic and regulatory environment. The takeaway: This technology will augment everything that Oklahoma does best, from its strong oil and gas production industry to agriculture to its many pre-existing aerospace interests, which can then export the technology around the country and world. An investment in UAS technologies is an investment in just about every other industry in the state as well as in an emerging economic sector that stretches far beyond its borders, a sector in which it hopes to become a leader.

So what will America’s drone-enhanced future look like? The personalization of the UAS–the niche unmanned system–is coming, Minson says. But it’s coming later. We’ll first see unmanned systems doing what comes most naturally to them: public safety and law enforcement missions that are easy lateral transitions for military technologies. The mission profile of a first responder UAS–enhancing situational awareness, locating targets in a chaotic environment, streaming data from places too dangerous for human presence–is almost exactly that of most military UAS (Hellfire missiles not included).

Look no further than Procerus, a UAS recently acquired by Lockheed Martin when it bought the company of the same name in January, at just about the same time Congress ordered the FAA to get busy opening American skies to UAS. Lockheed demonstrated the rapidly-deployable, surveillance-oriented quadrotor all week at AUVSI, but it did so with an emphasis not on Marines in Afghanistan but on police officers and emergency crews here at home. Similarly, over at the Aerovironment booth, the camera-equipped Qube quadrotor has the word “POLICE” stenciled on its side and is marketed toward local law enforcement. These UAS are not destined for Helmand Province, but for the trunks of police cars and firefighting vehicles here in the States.

On the show floor, we saw submersible robots aimed at everything from harbor security to oceanographic science, surface maritime robots augmented with fully automatic weapons but also simply with cameras, beacons, and scientific instruments. There was at least one aerial drone fitted with a drill for coring ice samples in frozen areas, presumably for oil and gas exploration as well as for climatological and atmospheric science missions in polar regions. One unmanned helicopter was fitted with the kind of simple crop spraying equipment you could find at Tractor Supply. This relatively simple hack is now a consumer item, a UAS swiftly converted into a crop-dusting drone. By merging two mature and relatively unexciting technologies, we now have something that could be huge for farmers–and for the domestic unmanned systems market.

The point being that at a trade show that has been ruled by its near-singular military customer for decades, diversification is spiking. The unmanned systems world is seriously branching out. There are still a lot of challenges to be met, especially when it comes to integrating remotely piloted and semi-autonomous or autonomous aerial vehicles into an airspace already cluttered with manned aircraft, but you might be surprised how hard–and in some cases for how long–some of the most highly respected names in aviation and robotics have been working on solving these problems. Top people at avionics-maker Rockwell Collins’ UAS group told me how confident they are that we can safely put large unmanned aircraft and manned aircraft into shared airspace in a reasonable time frame without rewriting the book on aircraft operations. They’ve been at this for years. We are not starting from scratch.

Necessity will mother invention in this space, and that’s the most exciting thing. At AUVSI 2012, we see a lot of vehicles–platforms that can carry payloads robotically, or autonomously in many cases. Most companies are keeping their payloads modular so they and their customers can customize them as they find new applications. Those applications are all around us, and they extend far beyond infrastructure inspection, public safety, and site security. The most interesting robot at AUVSI this year is the one nobody has built yet. “Everyone is going to want something different,” Minson says. “The most interesting things are the things we can’t think of yet.”