These military vehicles are designed to deploy drone-like missiles 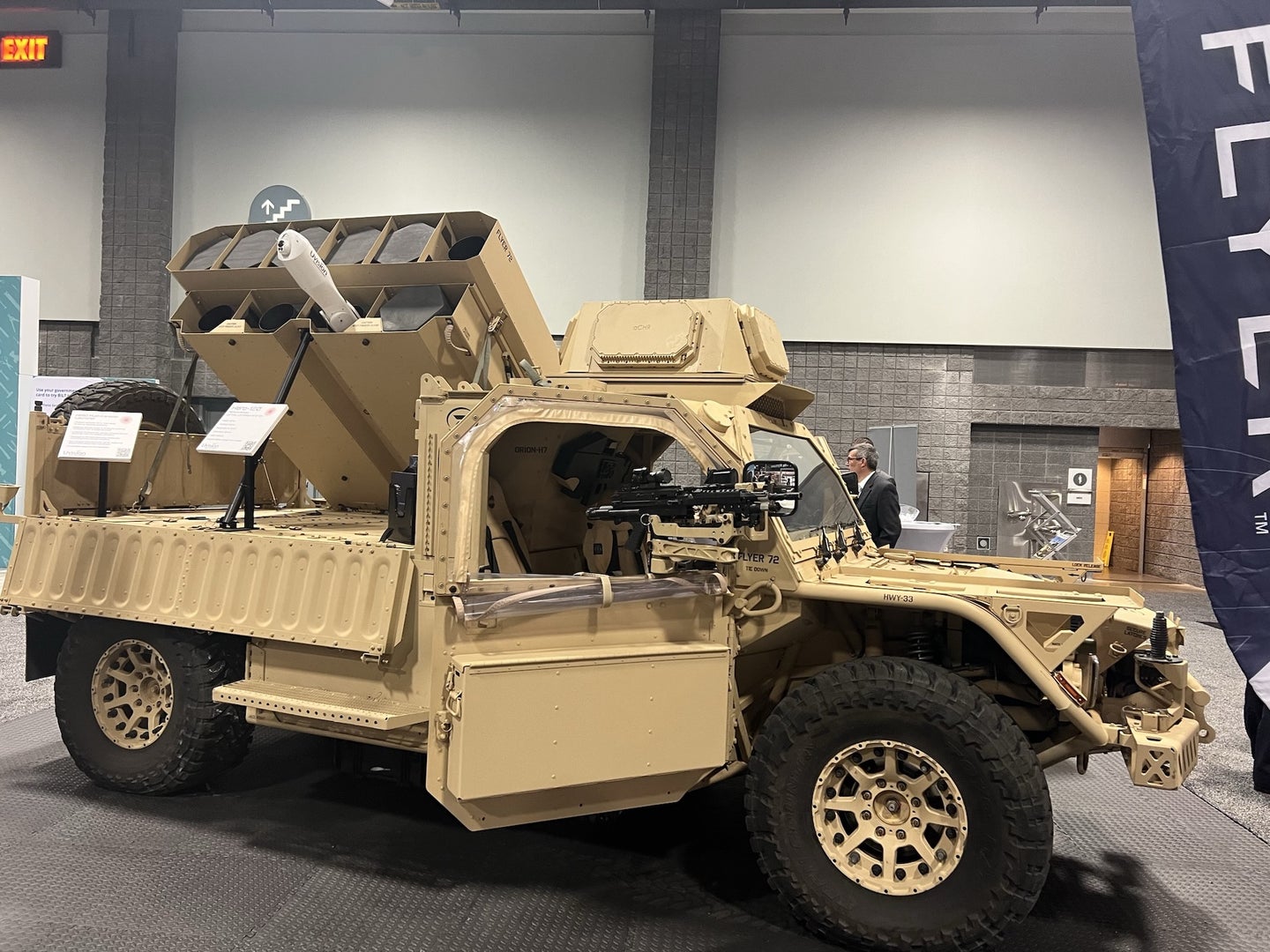 Every October, the Association of the United States Army hosts an exposition in Washington, DC, where arms makers from across the globe gather to showcase the latest vehicles and weapons. On offer at the 2022 conference was a new and quintessentially modern type of vehicle: a rugged military truck with a launcher for loitering munitions, which are drone-shaped guided missiles that can (as their name implies) loiter, or spend time circling an area before crashing into a target. The idea was so compelling, it showed up on the floor at least twice. In one case, the F72-U Hero-120, made by Flyer Defense, mounts a loitering munition launcher on the back of the company’s F-72 utility truck. And in another, made by AM General, the HUMVEE Saber Blade features a loitering munition launcher on the back of a HUMVEE vehicle.

The existence of both vehicles suggests that there is special value in this kind of composite technology. Both models are working with existing, known, and reliable trucks as platforms. Adding loitering munition launchers to the back creates a new vehicle, one that can launch weapons at distance and with accuracy, before moving away.

These developments are taking place in light of the ongoing Russian invasion of Ukraine, where artillery and drones have both had a major impact on how forces fight. For example, the HIMARS, a US-made and supplied rocket artillery truck, mounts a sophisticated launcher on the back of a vehicle, letting crews fire at a target and then drive away before retaliation.

In a pinch, both options from Flyer Defense and AM General suggest the ability for an army to use loitering munitions in much the same way that a HIMARs employs rockets. A vehicle-mounted launcher gives flexibility for advance and firing, as well as mobility to relocate after launch.

The F72-U Hero-120 is built around the ability to fire Hero-120 loitering munitions. These winged missiles, made by Mistral and UVision, have a range of at least 25 miles, and can carry a 10-pound warhead. The Hero-120s can also fly for up to 60 minutes, powered by their onboard electric motor. This also lets the missiles be called off after launch, in case the situation changes or the target is no longer relevant, which is one of the more crucial distinctions between loitering munitions and unrecoverable missiles.

As displayed, Flyer’s vehicle can transport 10 of the weapons, with four ready to launch and six stowed.

The Marine Corps has already selected Hero-120s as a loitering munition to pair with Organic Precision Fires-Mounted requirement. The goal of that program is to arm a vehicle that can travel with marines, while also expanding the range of what those marines can target beyond that of infantry-carried weapons.

Also on display, and following a similar template, is the HUMVEE Saber Blade. Made by AM General, the Saber Blade also features a remote-control weapon station and counter-drone system, made by Hornet. This includes airburst ammunition and a special drone-specific detection sensor.

“The current conflicts have demonstrated the increasing importance of drones, whether to target vehicles or for reconnaissance missions. Being able to detect and defeat such threats while maintaining the vehicle’s primary protective capacity is the ultimate capability for a Remote Control Weapon Station,” Jean Boy, managing director of Hornet, said in a release.

Drones, from hobbyist models to dedicated military machines, have been a regular feature of the Ukraine Donbas war since 2014. In that conflict, drones often scouted static positions, or on occassion dropped small bombs. When Russia launched a full-scale invasion of Ukraine in February 2022, both sides began using drones in far more extensive ways. Armed drones have been used to hunt tanks. Small quadcopters have been used to guide infantry and artillery fire, to the point where soldiers fighting without quadcopters in their formations felt like “blind kittens.”

The Saber Blade vehicle can not just defend itself against drones, it can also launch Switchblade 300 and Switchblade 600 loitering munitions, which its maker AM General describes as “loitering precision strike missiles for use against non-line-of-sight targets.”

Loitering munitions, like drones, are an increasingly common presence on modern battlefields. Russia has launched attacks on Kyiv using Iranian-supplied Shahed-136 loitering munitions. These weapons can complement missile barrages or rocket attacks. The history of modern artillery development suggests that the weapons can be used for precision strikes, as well as wider destruction.

While it will likely be some time before these vehicles can be adopted and integrated into modern forces, the promise is for accurate, beyond line of sight fire that leans on the kind of sensors and navigation already inherent in loitering munitions. Equipping mobile formations with loitering munitions mounted from trucks lets soldiers fight enemies at greater distances, with weapons that can, as designed, hit just the specific vehicles, enemies, or buildings targeted.