What the People's Liberation Army has up its sleeve. 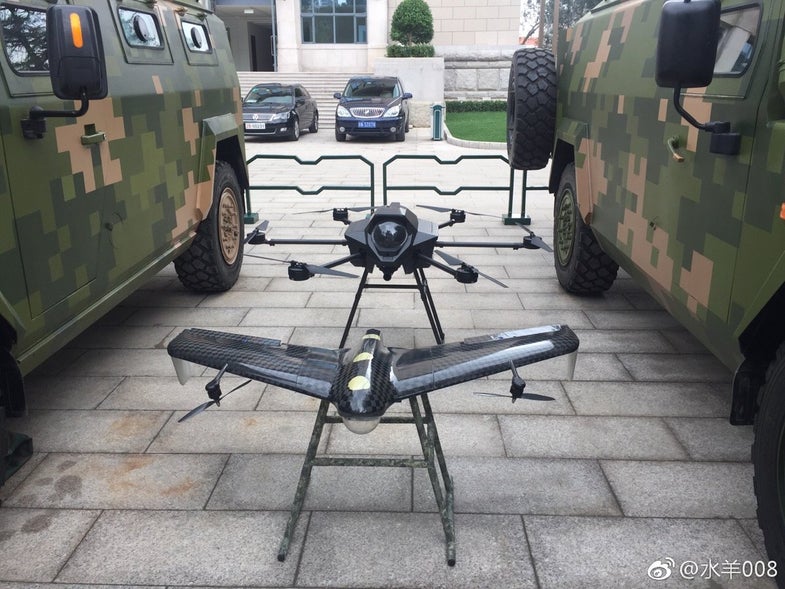 The hexacopter, like the fixed wing UAV in front of it, are both used for tactical information gathering by Chinese troops. Oedo Soldier
SHARE 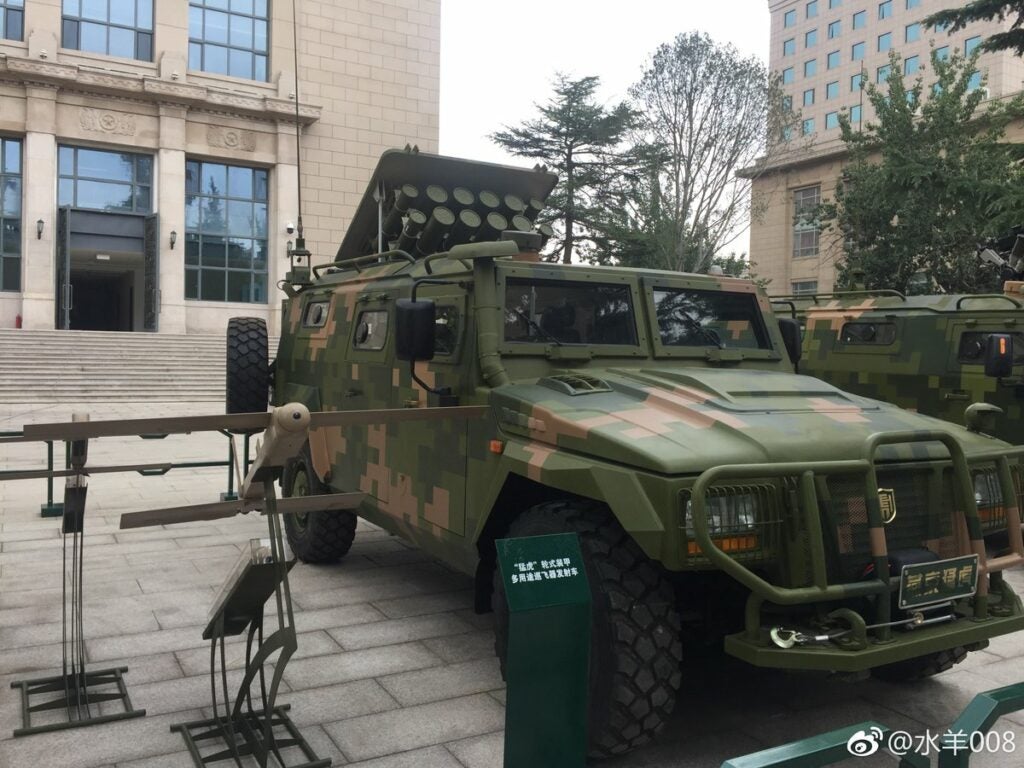 This display at the Military Museum indicates that the 20-pound CH-901 drone, which can be used as a loitering munition, is in service with the People’s Liberation Army (PLA). Behind it is a smaller recon unmanned aerial vehicle (UAV) that’s launched from the smaller tubes on the 4X4 launch armored fighting vehicle (AFV).

As part of its celebration of the People’s Liberation Army, the Military Museum of the Chinese People’s Revolution in Beijing is showing off a range of exciting exhibitions, offering a peek into the PLA’s new self-propelled artillery, cruise missiles, ballistic missile launchers, and—perhaps most notably—tactical unmanned aerial systems.

First up, there’s official confirmation that the CH-901 “kamikaze” loitering attack munitions (a short-ranged mini-drone) is in use by the PLA. First publicly displayed at the DSA 2016 arms fair, CH-901 is a 20-pound, fixed-wing drone with a flight speed range of 9 to 90 miles per hour. It’s got a 1.2-mile-range electro optical camera for reconnaissance (it can be recovered this way) and/or it can crash into enemy targets, detonating its warhead. It is comparable to the American Aerovironment “Switchblade” used by Special Operations. At the Military Museum, a 4X4 armored fighting vehicle (AFV) is armed with a pop-up hatch that carries eight CH-901 pneumatically launch tubes. The launcher also has four launch tubes for a smaller fixed-wing reconnaissance UAV. The CH-901 launcher is likely to be used by lighter units like Special Operations, or amphibious and airborne troops, which cannot always count on conventional air and artillery support. 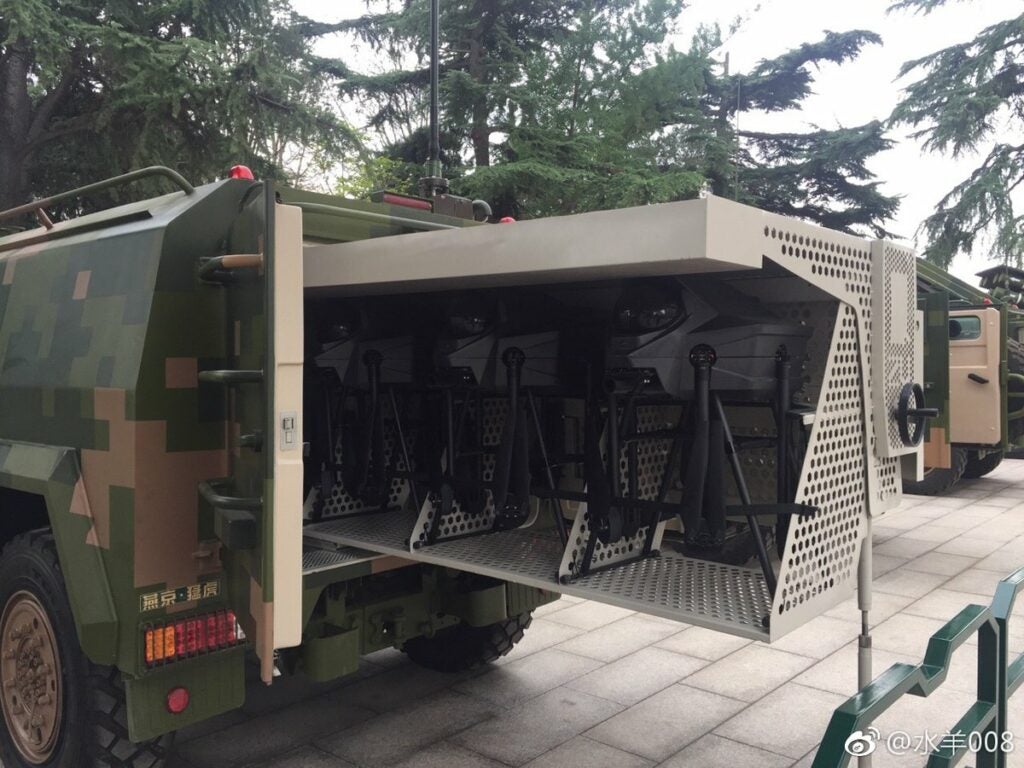 These tactical hexacopters can be deployed for launch by sliding their rack on the AFV backdoor, and use them to support company/battalion operations.

Another 4X4 AFV had an even more interesting cargo: three large hexacopter drones, with collapsible rotor-housing struts. Carried on a slide-out rack deployed out of the rear infantry exfiltration door of the vehicle, each hexacopter is about 4 feet tall, with a wingspan of about 6 and a half feet and a large dome camera mounted on the main body.

Judging by the performance of other similarly-sized hexacopters—like the 33-pound JSSG hexacopter—this reconnaissance vehicle would have a range of about 6-9 miles, a flight altitude of over 3,000 feet, top speed of 50 miles per hour and enough battery life for 1 hour of flight time. The setting suggests that the hexacopters would likely be deployed at the battalion or company level, and be used for communications and reconnaissance purposes. 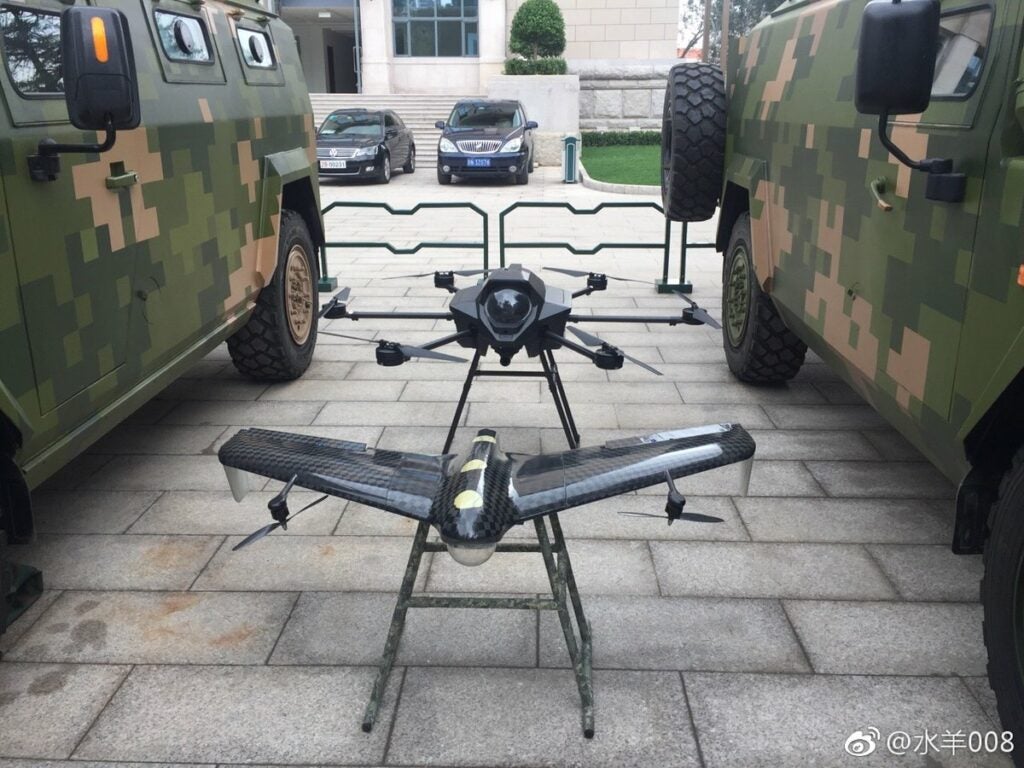 The hexacopter, like the fixed wing UAV in front of it, are both used for tactical information gathering by Chinese troops.

Next to the hexacopter carrier display was another tactical unmanned aircraft system of interesting design. The systems is 2 meter wide flying wing with its electric propellers facing down, suggesting that it could be a tilt rotor drone with vertical take off and conventional flight capabilities.  The putative tilt rotor tactical drone is also likely to be carried by another 4X4 AFV.

The display fits well within the wider vision of the PLA. The planned integration of unmanned systems into the tactical level—in addition to cutting the total number of ground troops to increase resources per capita—suggests the army is hoping to delegate responsibility and initiatives to lower-level officers, in light of the increasingly chaotic battlefields seen in Iraq and Ukraine.