Tracing the controversial history of cluster bombs, from the USSR to Ukraine

What to know about cluster munitions, precision-guided weapons, and US and Soviet arms development during the Cold War. 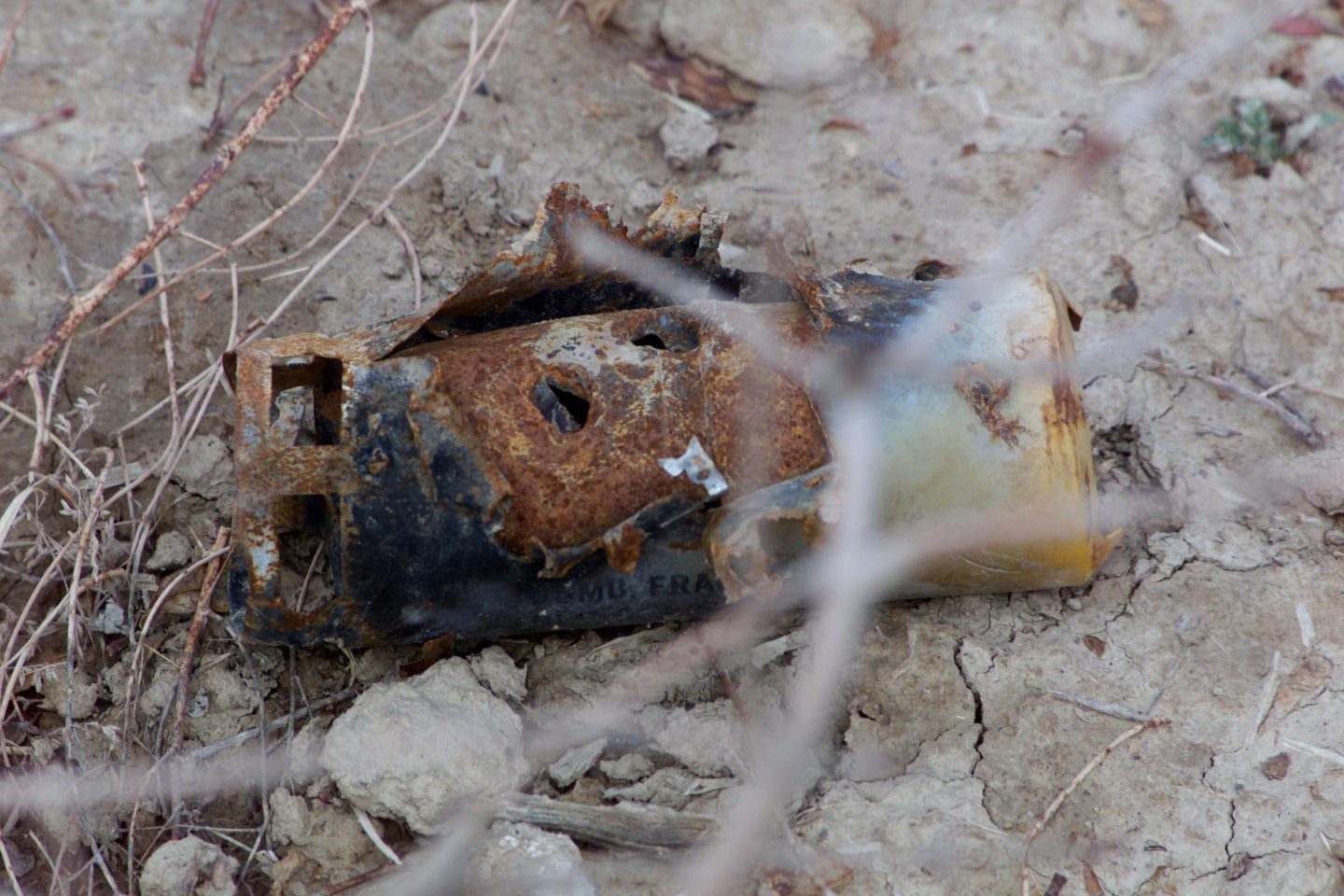 A fragment from a cluster bomb as photographed in 2002 and found near a former Taliban training camp in Afghanistan. U.S. Army / George Allen
SHARE

This story was published in partnership with The Center for Public Integrity. This is the sixth in a 10-part series on nuclear risk, military technology, and the future of warfare in light of Russia’s invasion of Ukraine.

The city of Mykolaiv sits just northwest of the mouth of the Dnieper River, in southern Ukraine. While the city has not yet been occupied by Russian troops, it has not been spared from attack. A Russian missile tore through a government building in the city on Tuesday, leaving at least 12 dead. Just over two weeks earlier, on March 13, nine civilians were killed by Russian cluster munitions in the city, according to a report from Human Rights Watch, and that was just one of multiple uses of the widely condemned weapon so far in the war.

Today, both Russia and Ukraine field weapons inherited from the Soviet arsenal, and developed in accordance with Soviet doctrine. Neither country is a signatory of the Convention on Cluster Munitions, and neither is the U.S., which also developed and fields some multiple rocket launch systems of its own.

Colin Kahl, U.S. under secretary of defense for policy, told Reuters that Russia is running out of precision-guided munitions for its war in Ukraine, which means the country is more likely to rely on artillery and unguided bombs, including unguided cluster munitions.

Modern cluster munitions, like precision-guided munitions, are products of divergent weapons development, built to answer the same question during the Cold War: In the event of a massive tank-led invasion of a country in Europe, what’s the best way to stop that army in its tracks?

The first answer pursued by the U.S. was deterence in the form of overwhelming nuclear superiority, with the U.S. using its advantage in missiles and bombs to threaten either a cataclysmic first strike, or to deploy those weapons for mutually assured destruction in the event of a Soviet first strike. This U.S. nuclear superiority ended in 1978, when the USSR’s arsenal of nuclear warheads surpassed that of the U.S.

Instead of trying to pull ahead in the nuclear arms race, in the late 1970s U.S. defense planners looked for an area where American technology could deliver an edge, and turned to nascent developments in precision-guided weapons as the way forward. (While some cluster bombs include guidance systems, the vast majority of cluster bombs fielded lack guidance systems.)

“Precision-guided weapons, I believe, have the potential of revolutionizing warfare,” William Perry, then-under secretary of defense for research, said in congressional testimony in 1978.

The U.S. had already developed and fielded some precision-guided munitions in the 1960s and 1970s. One precision weapon that entered service in the 1960s was the Walleye television-guided bomb, which had a TV camera inside. Before it was fired from a two-seater F-4 Phantom fighter jet, the camera would transmit the signal to the jet’s weapons officer, who would select the target. Then the bomb would continue to use the camera to steer itself as it fell. Another kind of precision munition was laser-guided bombs, which could follow a laser beam to a target.

“If we effectively exploit the lead we have in this field,” Perry told the House Committee on Armed Services, “we can greatly enhance our ability to deter war without having to compete tank for tank, missile for missile with the Soviet Union.”

These new advances were designed to be paired with better sensors for finding targets. If the guided munitions and sensors worked together as promised, Perry said, it would give the U.S. military the power to see all the important targets on a battlefield, and then destroy them with direct hits.

This accuracy, developed as a way to more efficiently place explosives for maximum effect in a large battle, had a follow-on effect of making it possible for militaries to launch airstrikes in cities with the intent of hitting only suspected insurgents or militants. Unlike artillery fire, which destroys an area, it is possible that a guided weapon fired from a drone only hits its intended targets and no one else, though as the Aug. 29 drone strike by the U.S. in Kabul showed, accurate targeting requires not just precise weaponry but also accurate information about who is in the crosshairs.

On a fighter jet with a finite capacity for bombs, making it so that almost every bomb dropped is a bomb that destroys an enemy vehicle or squad ultimately increases the effectiveness of each attach run. That accuracy and space efficiency comes with a price. A 500-pound unguided bomb costs about $4,000, while that same bomb with a guidance system costs $21,000. When the U.S. drops a guided bomb, it not only destroys the target, but also loses $17,000 worth of sensors and guidance systems.

The U.S. developed precision weapons in part because the nascent miniaturized electronics industry in the U.S. could, with funding from the Pentagon, support it. The Soviet Union, at about the same time, started to develop its own precision-guided munitions, but did so with a narrower strategic focus. A 1986 CIA report on Soviet precision weapons, declassified in 2000, expected the weapons to be primarily useful against tanks or “high-value soft targets,” like soldiers with anti-tank weapons. Instead of the U.S. approach of hitting all targets with precision weapons, the USSR reserved precision weapons for the targets it wanted to assure were destroyed, while trusting the scale of unguided artillery fire to deal with the rest.

This research into precision weapons was joined with already-existing Soviet doctrine, which emphasized the importance of ground-based artillery. This artillery included towed guns, artillery guns mounted on trucks so they can relocate after firing, and multiple-launch rocket systems, or heavy duty vehicles that can fire many rockets all at once from a rack mounted on the back.

It was one such artillery piece, the Smerch, that killed civilians in Mykolaiv this month.

The ammunition from these weapons are largely unguided, though some forms of precision rounds exist. Instead, to better direct fire, battlefield computers were used to calculate firing trajectories for the weapon, rather than the ammunition. To ensure that the artillery destroyed what it was aimed at, the weapons would blanket an area with artillery barrage, ensuring that a quantity of explosives got the job done.

Soviet precision-guided weapons, by a contemporaneous U.S. estimate, were then used to supplement this existing array of weaponry, allowing for some precise targeting in the overall mix.

“The Russians appreciate the potential for surgical strikes with precision munitions and have developed their own precision systems,” according to a 2017 report on Russian military doctrine by the U.S. Army’s Foreign Military Studies Office. “However, they also believe that massed artillery fires will continue to hold pride of place in future maneuver combat and are effective when precision fires are not.”

Whether or not a country builds military strategy around precision weapons depends on the kinds of wars it intends to fight. Russia’s military, inherited from Soviet plans for an invasion of Western Europe, emphasized the power of mass artillery. Those choices, made decades ago and carried into the present, can partly explain how Russia is fighting its war against Ukraine, and why precise weapons are in shorter supply.