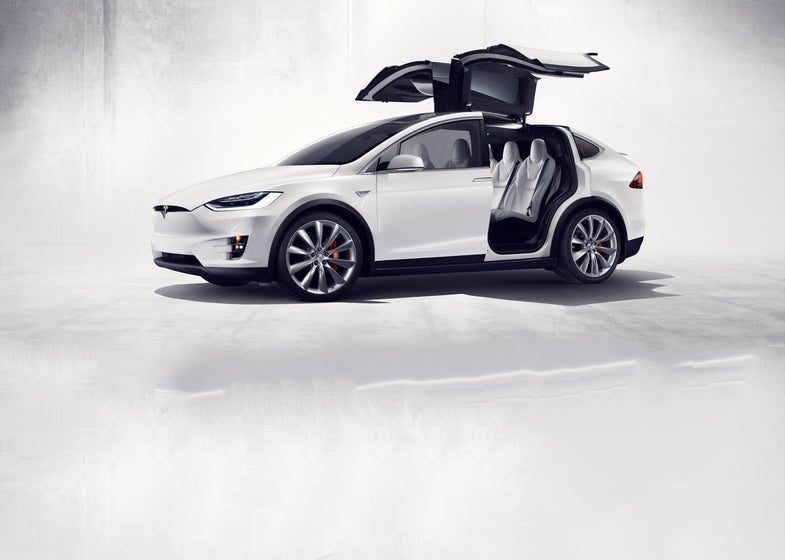 The Superhero of Cars

Tesla Motor’s latest SUV, the Model X, is the stuff of dreams you didn’t even know you had. The fully-electric vehicle shines with 762 horsepower and can reach up to 150 mph. Launched this week, the Model X also has the honor of being the SUV with the lowest roll-over risk, most aerodynamic design, and even comes with a “bioweapon defense mode” for the end times.

Tesla Motors debuted its newest, quirkiest, and most outrageous product yet last night at its factory in Fremont, California. The long-awaited Model X SUV is a 7-seater with exotic “falcon-wing” doors, a pair of electric motors (in the all-wheel-drive P90D edition) that crank out a combined 762 horsepower—making it capable of whipping a Porsche 911 Turbo’s butt at the drag strip any day, incidentally—full hands-off autopilot on highways, and a “bioweapon defense mode”: an air filter that’s ten times larger than average.

Seriously, what is Elon Musk drinking over there? To roll out a production vehicle with the sort of inspired lunacy we saw last night takes some industrial-strength determination, which Musk obviously has to spare. Can you imagine anyone at GM, Ford, BMW—or wherever—insisting with a straight face that they need not only that probably pointless bioweapons feature in case of an apocalypse (granted, it’s at least somewhat tongue-in-cheek) but also the largest curved windshield ever installed in a consumer vehicle, fully automatic front doors that open when you approach and close themselves once you’re inside (only the rear doors open skyward), and enough twist to haul 5,000 pounds worth of Airstream through a zombie wasteland—all in a fully electric SUV with a 250-mile range? Any CEO caught championing any one of those features amid the other requirements of a practical and reasonably affordable car would be shown the door faster than VW honcho Martin Winterkorn.

But here it is, the Model X. The laundry list of superlatives is extraordinary: It’s the first EV that can tow 5K; the quickest-accelerating production SUV by a large margin (0-60 in 3.2 seconds with the “Ludicrous Mode” option); it has the lowest center-of-gravity—and therefore lowest rollover risk—of any SUV, due to its flat-panel battery placement beneath the seats; it’s expected (by Tesla) to be rated as the safest SUV once government crash-testing is complete; and it’s the most aerodynamic SUV ever, with an impressive .24 coefficient of drag.

930 lb-ft of torque will launch you like a rocket from every stoplight.

That’s a lot of really focused engineering, and the performance numbers suggest it will be a crazy ride, with a top speed of 155 mph and 930 lb-ft of torque launching you like a rocket from every stoplight. Drivers will have to exercise serious restraint in order to see the 250 mile range from launch version’s 90kWh battery, but it’s there for them if they need it. Indeed, real-world driving will be revealing—not only of the Model X’s drive and handling characteristics, but also its usability.

The rear falcon doors certainly seem like they’ll ease entry and egress, beyond just looking cool, but how well will the hypersonic sensors intended to prevent contact with obstructions work? I’ll be curious to see how the fairly streamlined seats perform on long road trips, particularly in the middle row. Also, will that panoramic windshield, which arcs elegantly straight up above the front passengers’ heads before meeting the roof, offering a “helicopter-like” view, also offer helicopter-like glare on sunny days? Sure it’s tinted, but not fully. I have an equally tinted moonroof on my own car, and frequently want it just closed to minimize glare. What about privacy? Will that windshield make it like driving a fishbowl down the street? Finally, that autonomous Autopilot mode, which will take over the driving for you on highways, even passing cars with a flick of the turn-signal stalk. How’s that going to actually play out in the real world?

Overall, there’s a lot to admire here, and we’ll unpack the Model X more once we get behind the wheel for a full drive. But there’s also a lot to admire about the will, imagination, and playfulness we’re seeing again and again from Tesla’s creator, Elon Musk. You have to hand it to him, he’s making shit happen. One thing, though: That biodefense mode—exactly how far does Musk think we’re going to get in an electric SUV during the apocalypse? A range of 250 miles is great, but you can’t siphon electricity from other cars as easily as you can gasoline. Better get on those solar-powered Superchargers stat, Elon.