James Bond’s 1965 Aston Martin is up for auction, complete with working gadgets

Just try to resist the temptation to use the battering rams in traffic. 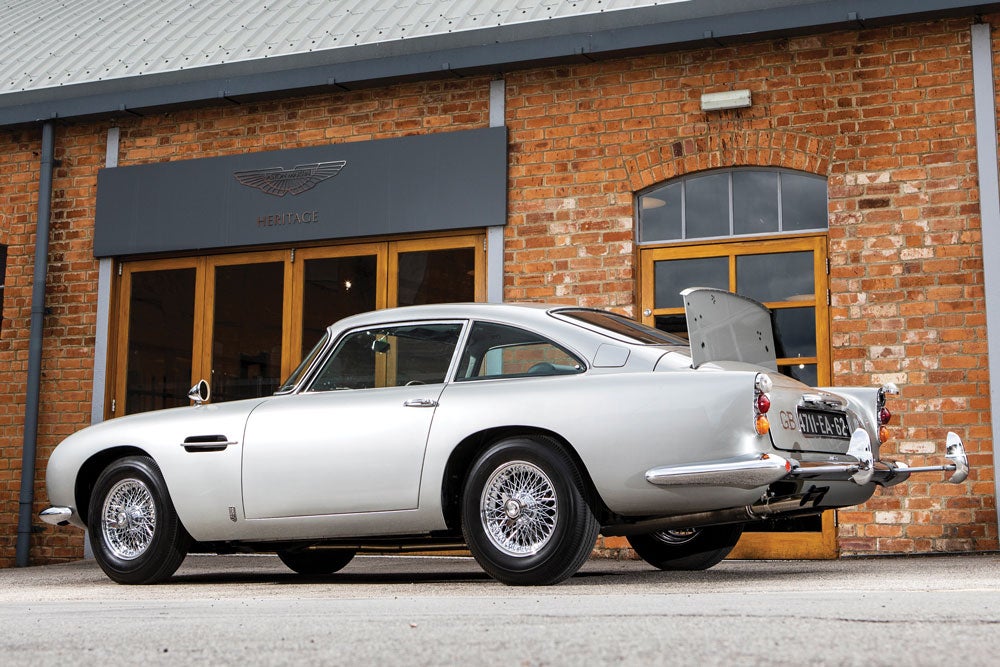 RM Sotheby’s auctioneers tout James Bond’s 1965 Aston Martin DB5 as the “world’s most famous car,” and it is hard to argue the point. Untold millions of Bond movie fans have fantasized about driving this cool Shadow Grey British sports car outfitted with all the hardware needed to fend off various baddies who have the temerity to take on 007 on the road.

More than 20 years after its debut, the arcade game Spy Hunter offered to put players in Bond’s driver’s seat, deploying the oil slicks, smoke screens, machine guns and tire-cutters as needed, although the game’s developers never concluded the necessary licensing agreement to put the spy’s name on the cabinet.

But, if you have a supervillain-worthy stash of cash, you can get the real thing, complete with all its original top-secret hardware restored and functional.

When James Bond’s signature Aston Martin DB5 debuted in 1964’s Goldfinger, filmmakers had to build cars that really featured the outlandish technology concocted by MI6 imagineer Q to aid 007 in his missions. Special effects artists didn’t have the digital effects that make modern movies so fast and furious.

For shooting the original film, the studio built two cars, one outfitted with all the gadgets that was used for interior and close-up shots, and a lightweight car without the equipment that was used for the all the dynamic scenes.

When Thunderball, the serial’s next installment, followed in 1965, Aston Martin itself built two more Bond DB5s that were sent to America to promote the film. This, one of those two promotional cars that were built to exacting specifications by Aston Martin itself, is now heading to auction at the RM Sotheby’s sale at Monterey Car Week August 15-17.

Following a 35-year stint as the centerpiece exhibit in a museum, this Bond-mobile, and all of its equipment, was restored by Roos Engineering in Switzerland, one of 13 Aston-certified Heritage Specialists in the world. The work took four years, resulting in this better-than-new machine that will leave its new owner prepared to take on SPECTRE, or whatever new villains might arise.

While all of the movie-prop add-ons are said to work, “work” is probably a debatable description. The ejection seat doesn’t seem likely to do more that appear to work, and the ‘60s vintage in-dash radar navigation system, which only appears to show Britain, must only light up, because it has no actual navigational data.

Regardless, historian Stephen Archer, who rode in one of the cars in 1965, observed, “The DB5 is a special Aston, but this one has an aura all of its own. Just to be in its presence is exciting. The standard of Roos’ restoration is extremely impressive.”

The silver car also left lasting memories for Bond actor Sean Connery, who recently added a DB5 to his garage. “These DB5s are amazing. I remember the Furka Pass tire shredding, as well as the promotional events with these cars—they have become increasingly iconic since Goldfinger and Thunderball.”

Classic car insurance company Hagerty values a top-condition non-Bond DB5 at $1.5 million, so expect the auction to start there and go up.