The pros and cons of electric rallying 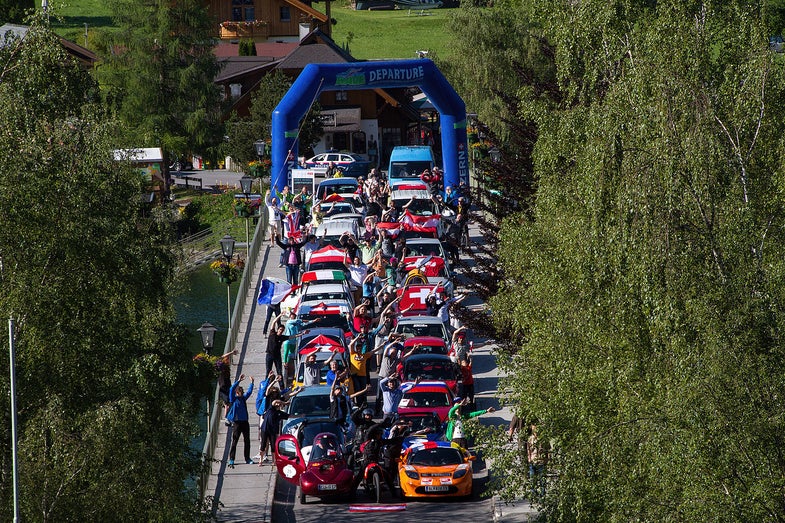 We last checked in with the 2016 WAVE Trophy rally across Europe when Naveen Rabelli was heading for the event in his solar-powered tuk-tuk. The all-electric rally has wrapped up for this year, and two of its participants shared via email what it was like to take on 1000 miles using only battery power.

Spiros Tsantias of Greece rode a Kumpan Electric 1954L in the rally and found it to be “quite comfortable” across the miles. His scooter was mostly stock, but there was a “pizza box” fitted especially for this rally that held extra batteries and the gear Tsantias would need for long-distance travel. He noted in an email that while this was special equipment for the WAVE Trophy, it could easily be offered by Kumpan as an option.

Christian Jog of Germany had a Zero SR motorcycle for the rally. He found Zero’s smartphone app handy, as it allowed him to adjust the maximum speed, torque, acceleration, and the degree of regenerative braking as the route required. There’s a standard sports mode for riding fast, an eco mode to conserve energy use, and the ability to use custom settings if you’re, say, riding 1000 miles across Europe. Jog’s Zero SR was also stock, but he carried “three different plugs, several adapters, and over-10-meter extension cables” in order to charge wherever he could along the route.

Tsantias had few problems with charging, though he did have to charge along the way on days when mileage was longer than his average of 100 km (62 miles) per charge. His range dropped quite a bit on mountainous sections, but on flat easy sections, he could eke out 120 km (75 miles). Jog’s stock charger broke down on the rally, but he had two additional chargers with him. He said he averaged about 150 km (93 miles) per charge, depending on the speed limit.

The biggest challenge for Tsantias was the fact that he was riding a scooter meant for city use. It was limited to 45 km/h (28 mph), so he couldn’t ride on highways. “I tried ‘drag racing’ it against a group of youngsters on two-stroke 50-cc scooters and was left for dead at the traffic light,” he wrote. He once found himself in a tunnel in the Jura mountains with a train of angry drivers behind him. “I must note that this is not indicative of electric two-wheelers in general,” Tsantias wrote. “A proper electric motorcycle or scooter without the legal restrictions of a city moped usually offers superior acceleration to a motorcycle/scooter of the same horsepower class.”

Jog agrees—he timed his acceleration on the Zero SR from 0-100 km/h (0-62 mph) at 3.3 seconds, and he had a top speed of 165 km/h (103 mph), “but I rarely go over 130 km/h [81 mph],” he wrote. Unlike Tsantias, whose scooter lost range in the mountains, Jog found that “hills and mountains are perfect for electric vehicles, especially lightweight bikes and motorcycles. Climbing even a 30° slope is not a problem, and descending means that you usually get a good portion of energy back. In the mountains I estimate a range of more than 160 km (100 miles), close to 200 km (124 miles).”

For now, many electric cars and motorcycles have a range of about 100 miles (Tesla’s cars being the current exception). This fact makes a 1000-mile rally a challenge, but Jog is optimistic about the future of EVs: “It is simply a matter of time until most bikers will drive electric, and only a few nostalgic veterans and old-timers will be seen on the streets in a not so far future.”