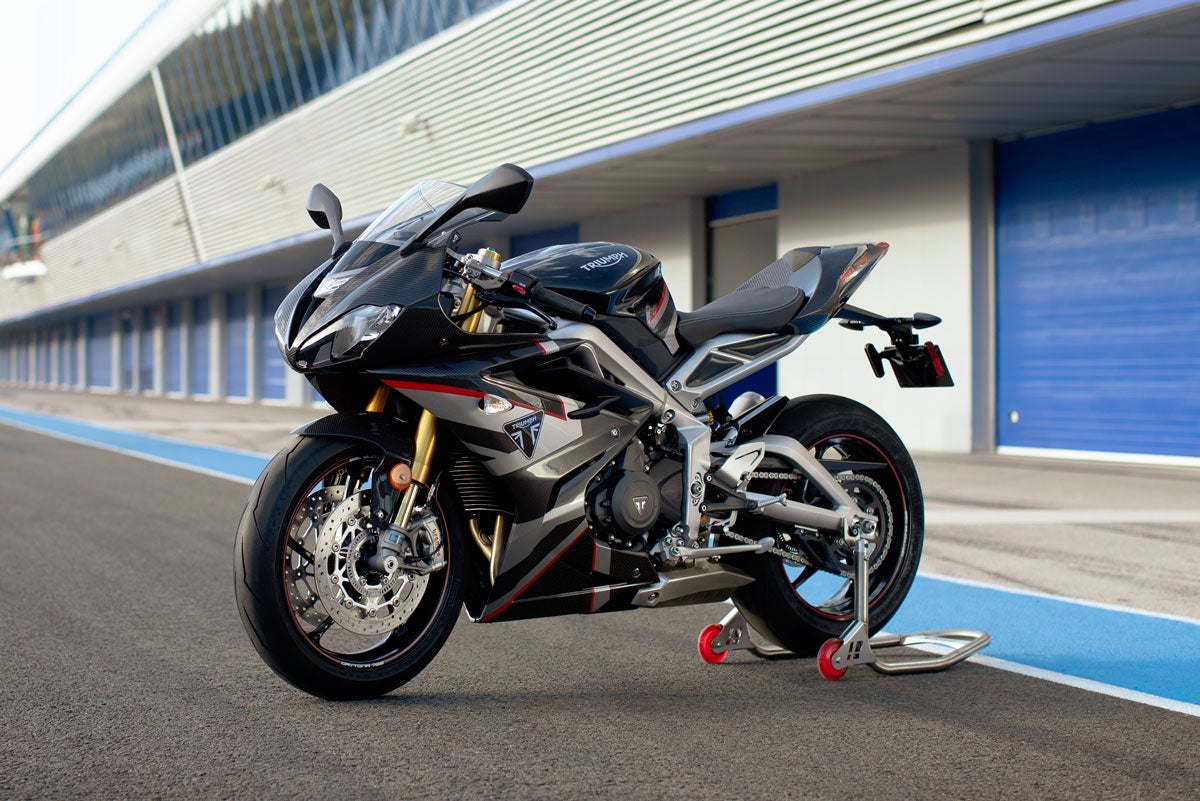 The bikes of the MotoGP racing series are incredibly fast, exotic and expensive, putting them out of the reach of all but the talented few contracted to race them. But the second-tier Moto2 series is slightly more within reach, thanks in large part to its reliance on a spec engine provided by Triumph.

Triumph is using a version of that Moto2 engine to power its Daytona Moto2 765 Limited Edition bike, an impressive near-race bike which will be available in limited quantities of only 765 motorcycles for North American buyers (with another 765 for the rest of the world). According to the company, it’s the closest thing you can get to an actual race bike for the road.

The carbon fiber bodywork wraps a machine that is lighter than the previous-generation Daytona, though official curb weight is not yet available. The 128-horsepower, 59 lb.-ft. engine is in Triumph’s signature parallel three-cylinder configuration and revs to a race-ready 13,250 rpm. The engine sounds travel through a stainless steel exhaust that is finished with a lightweight titanium muffler to deliver an authentic Moto2 race soundtrack.

The all-new 6-speed gearbox employs a range of optimized ratios that include a first gear derived directly from Moto2 experience, according to Triumph.

In racing style, the engine’s output is adjustable via the Daytona’s data system that is integrated into the full-color video instrument panel. Just to remind riders, this limited-edition ride starts up with its own unique Moto2 splash screen.

Once the computer has started, it lets riders select among five riding modes: Rain, Road, Rider Configurable, Sport and Track. These changes adjust the throttle map, traction control, and anti-lock braking to suit the conditions. It also includes Triumph Shift Assist, for speed clutchless up- and down-shifts. And, of course, there’s a built-in lap timer.

Triumph says the five-spoke 17-inch cast-aluminum wheels are the lightest in the Daytona’s class. They carry Pirelli Diablo Supercorsa SP tires front and back, the tiremaker’s latest, highest-performing motorcycle rubber to deliver the expected performance of a race-replica bike.

The ingredients suggest that Triumph isn’t engaging in hyperbole when it says the new Daytona is the next-closest thing to a Moto2 race bike, but hopefully we’ll get the chance to see for ourselves.