Five technologies that will shape the cars of the future 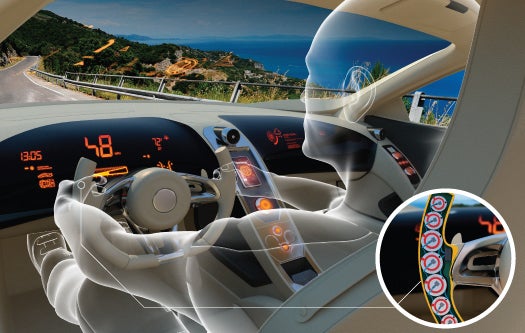 When J.D. Power released its annual customer-satisfaction survey in June, the issue that most irked American car buyers was not wind noise, inadequate acceleration or anything else related to the actual process of driving. It was unsatisfactory voice recognition. Drivers now expect cars to be rolling information-technology bubbles, and automakers are remaking the driving experience accordingly.

So far, car companies have had trouble keeping up with computing advances. While Apple issues a new iPhone annually, General Motors needs to finalize in-dash hardware and software years before a car reaches the market. But automakers could soon cede much of the software development to the same engineers who write smartphone apps. Today you can connect your phone to your car using a USB cable; the vehicle’s software will load your music and your contacts. Soon the smartphone will become the car’s computer, hosting the software that now runs in-dash applications. The smartphone is “a powerful free computer the customer is bringing into the car,” says David Bloom, an engineer at the BMW Group Technology Office. And it will make the cockpit—the navigation screen, the gauges, the voice that tells you “left turn ahead”—just as easy to customize and update as a smartphone is today.

To prevent a flood of digital information from becoming a deadly distraction, engineers have begun to rethink the way cars communicate with their drivers. Earlier this year, for example, Audi unveiled a concept for an augmented-reality system that projects information about the terrain (points of interest, names of buildings) onto the windshield, overlaying it on the scenery ahead.

Automobiles can also send information to their drivers using tactile feedback. The 2013 Cadillac XTS sedan uses vibrating motors in the seats to warn drivers of dangers such as the movement of cars through blind spots. Researchers at Carnegie Mellon University and AT&T Research Labs have collaborated to design a prototype steering wheel that uses vibrations to convey instructions from the navigation system. As the car nears a turn, 20 tiny motors buzz at an increasing frequency in a clockwise or counterclockwise pattern, letting the driver know which direction to go. Kevin Li, an engineer at AT&T who worked on the prototype, says that the brain “stitches together” these discrete vibrations, creating the illusion of a continuous line of motion. The engineering team has been in touch with automakers, and Li says the haptic steering wheel could be deployed right away.

Five times stronger than steel yet two thirds the weight, carbon-fiber-reinforced plastic (CFRP) has for two decades been the chassis material of choice for racecars. But carbon fiber has always been time-consuming and labor-intensive to manufacture, so it hasn’t been economical for passenger vehicles. Increasingly efficient manufacturing methods are bringing down the cost. Next year, BMW will begin selling its i3 electric city car, the first mass-produced automobile with a carbon-fiber chassis. The four-seat i3 chassis, which BMW calls the “Life module,” weighs just 265 pounds, or 50 percent less than a steel structure. (CFRP is also 30 percent lighter than the most advanced extruded aluminum.)

A BMW joint venture has invested $100 million in a Washington State factory that manufactures carbon-fiber “tows”—bundles of 50,000 carbon-fiber filaments, each filament 1/10 the width of a human hair. Those tows are thicker than the 6,000-filament bundles used in previous aerospace and auto applications, so it takes fewer of them to weave into the carbon-fiber fabric that undergirds CFRP. In BMW’s process, workers ship the tows from Washington to Germany, where they’re woven into a fabric, then pressurized and impregnated with liquid plastic. CFRP can then be molded into structural components in less than 10 minutes—a process that once took hours.

The i3’s carbon-fiber chassis saved enough weight to offset the mass of the car’s hefty lithium-ion battery pack. In fact, BMW engineers were able to reach 100 miles of driving range using a smaller, less expensive battery than competitors (21 kilowatt-hours versus the Nissan Leaf’s 24-kilowatt-hour pack). By next year, the automaker plans to begin building more than 1 million carbon-fiber structural parts annually. Joerg Pohlman, managing director of BMW’s Washington venture, says that while carbon fiber still costs more than aluminum, he is “absolutely confident” that BMW can slash costs to a par with aluminum once it begins building cars in volume. “You will see composite structures in normal passenger cars in much less than 10 years,” he says. That’s a development that could make cars faster, more efficient and more crash-resistant than ever before.

Drive an electric car slowly around town, and the charge remaining in the lithium-ion battery will decrease with perfect predictability. But hard acceleration is hell on batteries. Hit the highway, and the remaining driving range will drop precipitously.

Pairing batteries with ultracapacitors could fix that. Unlike batteries, which store energy chemically, ultra-capacitors hold a charge in an electromagnetic field between two electrodes coated in porous activated carbon. This allows them to absorb electricity as quickly as an outlet can dispense it and discharge it just as fast. In a car, that translates into fast recharging and powerful acceleration.

Unlike batteries, ultra-capacitors can absorb electricity as quickly as an outlet can dispense it and discharge it just as fast.Right now, the best ultracapacitors hold only about 5 percent as much energy as a comparably sized lithium-ion battery—not enough to power an electric car, but enough to work in a supporting role. Carmakers such as Peugeot are already experimenting with ultracapacitors for regenerative braking and start-stop systems, which save fuel by cutting the engine at red lights before starting up again as soon as the driver touches the gas pedal. The next logical step is to add ultracapacitors to electric cars to handle the tasks that put excessive strain on batteries. Joel Schindall, a professor of electrical engineering at MIT, is researching ways to use nanotubes to improve ultracapacitors. “The best solution,” he says, “is a hybrid where the battery is optimized for total energy storage, while the ultracapacitor satisfies the peak power demands during acceleration.” Schindall and other scientists are working to create ultracapacitors that can store more energy by improving electrode materials on the molecular level. If they succeed—if ultracapacitors can one day approach the charge-carrying capacity of lithium-ion batteries—they could solve one of the more vexing problems facing electric vehicles: slow recharge times. The fastest fast-charge station takes 30 minutes to recharge an empty battery. (Any more current begins to damage the electrodes.) Ultracapacitors, by contrast, could soak up a full charge in a matter of minutes. Among the questions that the engineers of the SARTRE road-train project had to answer: How should a car signal that it wants to join the convoy? How many cars should be allowed in? Should a convoy be allowed to pass other cars?

Today’s high-end cars can correct your steering when you veer out of a lane, brake automatically to keep you from hitting other vehicles, and determine when you’re about to fall asleep. Cadillac is even expected to unveil hands-free cruise control in the next two years. For networks of autonomous or semiautonomous cars to work, however, vehicles must be able to communicate with and react to one another. The technology that will enable them to do so could soon be ready for production.

One afternoon in May members of a European Union–funded research project called SARTRE dispatched a convoy consisting of a tractor-trailer followed by three Volvo automobiles on a public highway in Spain. The vehicles, which were separated by just 20 feet, traveled together at 50 miles per hour; only the truck had a driver.

SARTRE is the first real-world test of a “road train”— a convoy of cars autonomously following a ­human-operated lead vehicle (most likely a truck or bus) driven by a professional. (See a trial run of it in the video below.) The trailing automobiles could be passenger cars on a long journey. By reducing wind resistance and traveling at a steady speed, these convoys could improve fuel economy and reduce tailpipe emissions by 20 percent. They could also make road trips vastly more pleasant. Once in the convoy, explains Eric Chan, the project’s chief engineer, the “drivers” of the following cars “could relax and read a book.”

The Volvos in the SARTRE test detect lane markers and other vehicles using the same cameras and radar/lidar sensors already available in production vehicles. Engineers added custom software to fuse together the data gathered by those sensors (and a processor to run it) as well as antennas that allow the cars to communicate via Wi-Fi. But SARTRE engineers stress that all of the technology involved is available off the shelf today. In fact, the biggest remaining challenges are legal and psychological. Regulators will have to change traffic laws to account for driverless vehicles. Carmakers will have to equip those vehicles with the software necessary for joining road trains. Finally, drivers will have to be convinced that the system is safe. (SARTRE engineers say that road trains could actually reduce traffic fatalities.) Those three steps are great enough that road trains realistically won’t be deployed for another decade.

Fuel economy standards are set to rise to 54.5 mpg by 2025. That prospect has carmakers adding turbochargers and computer-controlled direct injection to ever-smaller engines in order to wring every last mile out of a gallon of gas. The 2012 BMW 328i, for example, runs on a turbocharged four-cylinder engine (the first four-cylinder from BMW since 1999) that is more efficient and produces more torque than the six-cylinder it replaced. Ford is expected to put a turbocharged three-cylinder in the Fiesta in the near future. But turbochargers and direct injection can only do so much: To approach triple-digit mileage, engineers will have to fundamentally rethink internal combustion. Plenty of them have already started.

The Scuderi Group, a company in Massachusetts, is testing a prototype engine that devotes separate pistons to the compression and the power strokes, setting in motion a series of changes that increase mileage by up to 50 percent. The Michigan-based firm EcoMotors is perfecting an opposed-piston, opposed-cycle (OPOC) engine, in which a pair of pistons moving horizontally share a combustion chamber. The added efficiency could push a compact car to 100 mpg. EcoMotors says they could have their engine in production in five to seven years.