Its keyboard no longer sucks. 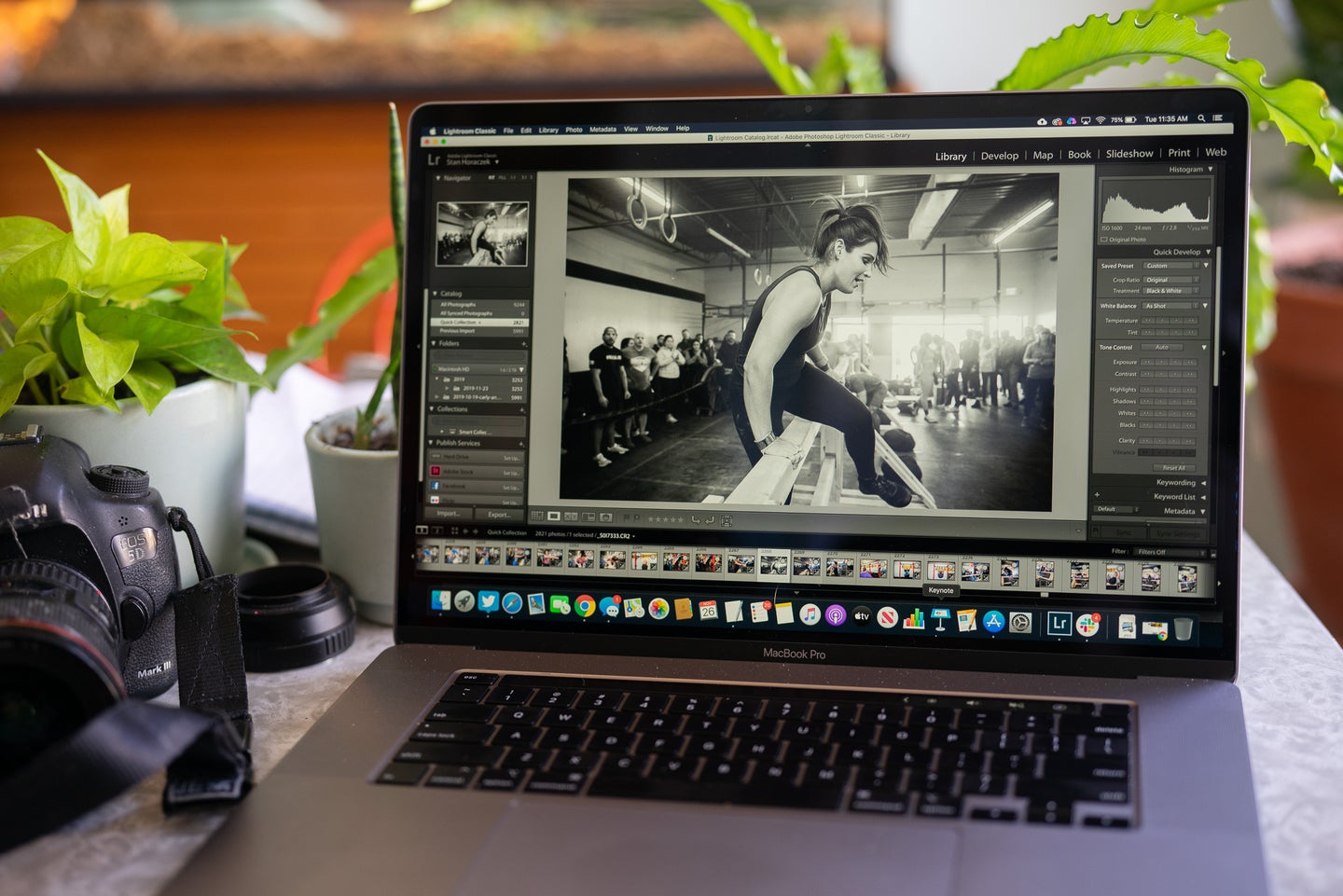 The 16-inch screen is only slightly larger than the 15.4, but the difference is noticeable. Stan Horaczek
SHARE

Just before I bought my first MacBook Pro back in 2012, Apple discontinued the 17-inch model. It wasn’t a particularly practical machine for most people—it weighed 6.6 pounds, which is like carrying two modern laptops with a charging brick. But, that hulking thing with the giant speakers next to the keyboard was a staple for many video editors and photographers at the time. I wanted one, but more than that, I wanted to be the kind of creative professional that really made use of its power.

But, in 2015, the MacBook Pro really felt like it lost its way. Thermal performance and a desire to make the laptop slimmer limited its performance and the fancy new Touch Bar added cool functionality, but it also evicted the physical escape key, which coding users need. The keyboard as a whole represented a major sticking point for heavy users—literally. The butterfly mechanism under the keys was too easily defeated by crumbs or debris, which is a scary prospect when you’ve spent plenty of nights eating dinner at your desk trying to finish a video, photo gallery, code, or any other thing a pro user might have to churn out.

Just a few weeks ago, however, Apple introduced a redesigned MacBook Pro and, frankly, it’s excellent. Apple has been extremely adamant in touting how much feedback from actual pros guided the revamp. The new 16-inch screen isn’t quite the hulking 17-incher from years past, but it does feel bigger. In fact, the whole computer is just better to use and should be enough to bring some users back into the MBP fold.

The 15-inch MacBook Pro is officially over—at least for now—and you can now choose between the 13-inch and the new 16-inch version. While the usable screen space is bigger, the machine itself hasn’t really grown. The bezel around the screen shrunk by 25 percent on the top and 34 percent on the sides and it checks in with a 3,072 x 1920 native resolution. No, it’s not 4K, but it does fall into Retina territory, and Apple claims you wouldn’t actually get any benefit from pushing more pixels, and instead you’d hurt your overall performance and battery life. Plus, the company clearly expects many users to plug these into external monitors when sitting at a desk.

The display is beautiful, but that doesn’t come as much of a surprise. After all, it’s not that much different than the 15-inch. It has the same 500-nit brightness rating and it works in the same P3 color space like its siblings.

Yeah, but what about the keyboard?

Yes, Apple fixed the MacBook Pro keyboard. I’ve only had it for a few weeks now, so I can’t make a sweeping generalization about how it will hold up over its entire lifecycle, but typing on it is better in just about every way. The keys sit on top of the scissor mechanism, which is similar to the pre-butterfly-mechanism-era MBPs. The 16-inch model offers 1mm of key travel, which means you’ll have to push them down twice as far. It’s more satisfying and a lot quieter than its predecessor. Still, I think you should go to the Apple Store and try typing on it before you take the leap, even if I haven’t talked to anyone yet who doesn’t consider it a serious upgrade.

The six-speaker system sounds shockingly good, at least compared to comparable machines I’ve used. Playing Spotify at max volume is actually too loud, even after switching from death metal to something calmer. You’re still better off using headphones, of course, but I did some A/B testing with the old model and got a few “wows,” in regards to the difference.

According to Apple, the new MacBook Pro has the biggest battery (100 watt-hours) the FAA will allow if you want to take it in the cabin of an airplane. Apple promises 11 hours of messing around on the internet out of a single charge. I had no problem going a full day of work without employing the 96 watt charger. If you’re planning to use an older charger, it will likely still work, but you’ll juice-up slower and if you’re really pushing it in terms of performance, the charger may not be able to keep up. Also, if you’re using an older cable, ensure that it can handle the power.

If you’re looking for intense benchmarks with meticulous charts comparing performance on a granular level, then this isn’t the review for you. Even if you go seek them out, you won’t typically find huge performance leaps in the results. The biggest difference comes in the form of the thermal architecture inside the machine, which many people believed was kneecapping the previous model because it couldn’t handle the heat.

The new internal arrangement gives the whole system more room to move air. The heat sync is bigger and the fans have moved to increase circulation. The spec sheet includes the high-end, latest-get Intel processors, which you might expect, but more importantly, those components now have more room to breathe and work to their actual capacity.

Push it hard and the computer still gets hot. While editing a roughly 5,000 image photo collection in Adobe’s Lightroom, I easily moved through the high-res images with very little lag, but I had to move the machine from my lap to the desk after a while or risk roasting my thighs.

If you’re looking for performance issues that could raise potential red flags, I didn’t find any and haven’t really seen any from other sources either. However, if you’re going to spring for upgraded graphics processing power, it’s worth making sure the software you use will actually take advantage of it. If you’re using something with older code, it may not have the ability to employ those pricey upgrades effectively.

You may notice that the new MacBook Pro is actually slightly bigger and a little heavier than the model that came before it. It’s slightly surprising to see it grow, but it makes way for features like the improved thermal performance, the bigger battery, and the vastly better keyboard. They all drastically outweigh the cost of adding a few millimeters here and there. I hope Apple keeps that ideology in mind going forward.

After its announcement, many Twitter users and tech blogs were quick to point out just how expensive the new MacBook Pro can get—you can pay more than $6,000 if you want to. The base model, however, starts at $2,399 and that’s likely the logical option for most people. You get a 2.6GHz Core i7 professor, 16 GB RAM, 512GB of storage. That SSD is a little wimpy, but unless you can explicitly state why you need more power than one of those specs, it’s probably not worth the extra money.

For $2,799, you can move up to a 2.3GHz 8-core processor with 1 TB internal storage and a more powerful graphics card. If you can swing the upgrade, it’s likely worth it since MacBook Pros tend to last for years and that extra power will make a difference down the road.

Is it worth upgrading for the keyboard alone? Probably not. But, users who have been desperately clinging to pre-2015 models hoping for a course correction finally have been rewarded for their patience.