How It Works: Underground Robot Library

Research libraries are facing an unexpected challenge: too many books. Despite digitization, bound collections continue to grow. Some libraries house... 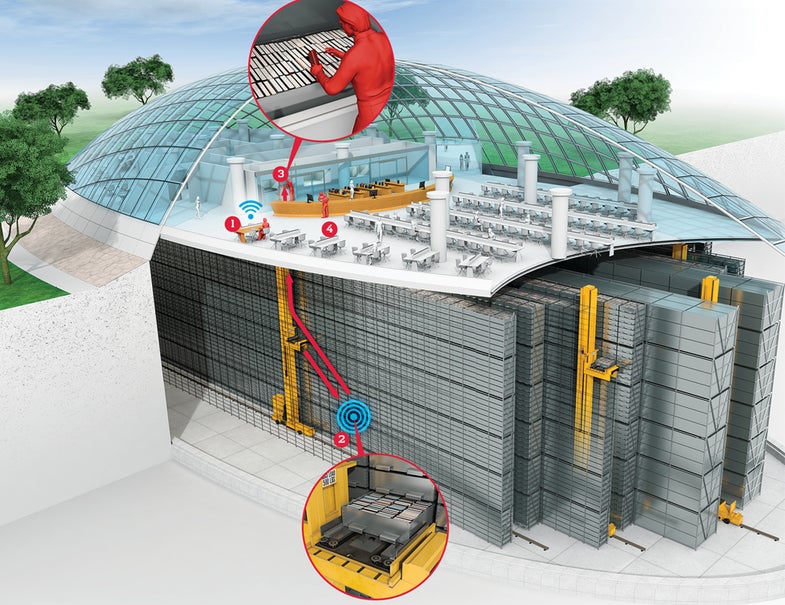 Research libraries are facing an unexpected challenge: too many books. Despite digitization, bound collections continue to grow. Some libraries house their stacks offsite, which can create multi-day delays between request and retrieval. Last June, the Mansueto Library at the University of Chicago, which accumulates about 150,000 books every year, introduced a system of robotic stacks capable of holding 3.5 million volumes in one seventh the space required by conventional stacks. The trick: Librarians sort books by size and not by Dewey decimal system. Engineers from Dematic, a firm that builds automated parts and storage-retrieval systems for Boeing, Ford and IBM, designed a five-story underground storage area managed by five robotic cranes. Dematic has built 17 automated library systems worldwide, but the University of Chicago’s is the most complex. The company has three more libraries under construction.

The basic unit of the system is the bin—the storage area contains 24,000 of them stacked on twelve 50-foot-high metal racks. Most bins are 18 inches by two feet by four feet, subdivided into several compartments, and hold about 100 average-size books. Larger items, such as manuscripts and atlases, are stored on two double-wide rows of racks that face the center aisle. The book vault is kept at optimal conditions for paper preservation, 60˚F and 30 percent relative humidity.

When a library user requests a book through the online card catalog, the catalog shares the request with the Dematic system, which pulls up a book’s bin and compartment information along with the bin’s current location on the racks.

In the book vault, four robotic cranes serve two rows of bins apiece and one crane serves the two double-wide rows. All cranes traverse the length of the building on rails built into the floor. A programmed logic controller, originally developed to guide automotive assembly lines, coordinates the cranes’ movements and guides them to the appropriate bin. Cranes can move horizontally and vertically at the same time. “It’s like a big matrix,” says Todd Hunter, the head of document management at Dematic. Once the crane reaches the proper bin, it extends two pins that catch metal handles on the container. With the pins engaged, the crane pulls the bin onto its platform. It then transfers the bin to a lift that delivers it through one of five openings in the vault’s ceiling to the circulation desk.

When the bin arrives at the circulation desk, the librarians receive an alert on their computer screens identifying the book title requested and the bin compartment in which it is located. A librarian sorts through the compartment to find the book—a process that generally takes 10 to 15 seconds—and scans the bar code, which prompts the system to send a ready-for-pickup e-mail to the customer. The time between request and retrieval is usually about five minutes.

After a customer returns a book, a librarian requests a bin holding similarly sized titles. The librarian places the book in the proper compartment, scans it, and presses a function key to indicate that the bin should be lowered back into the vault. Sorting the books by size has another advantage over the Dewey decimal system. “Most libraries lose or misshelve 2 to 3 percent of their collection every year,” Hunter says. “With this system, that loss is virtually eliminated.” 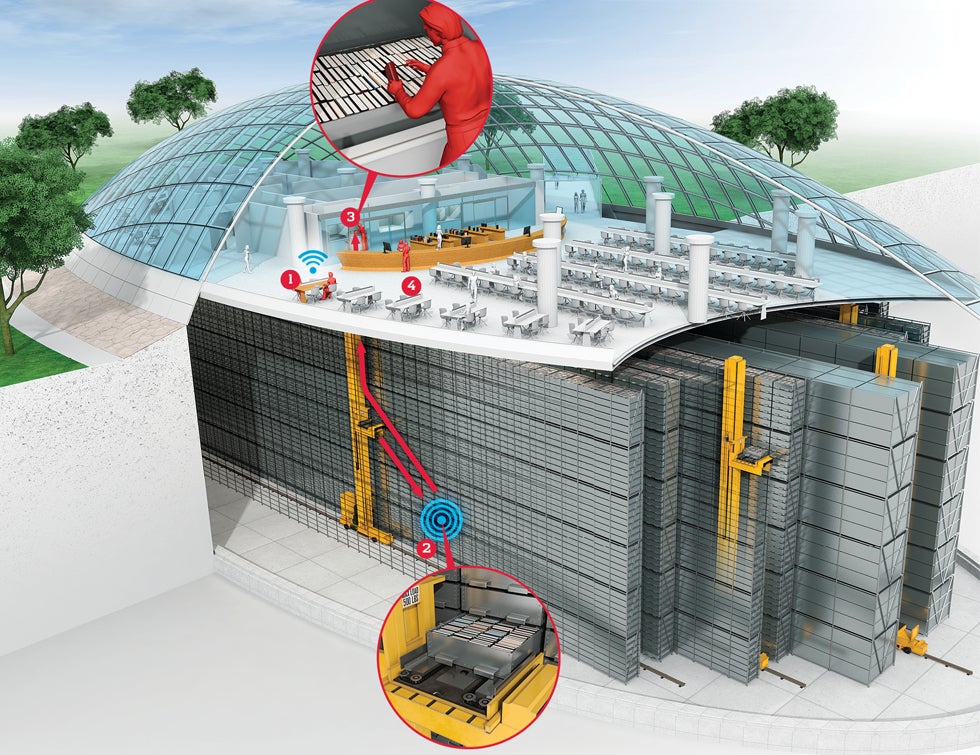