The robot-staffed, windmill-powered Dutch port poised to become the most efficient cargo handler ever. 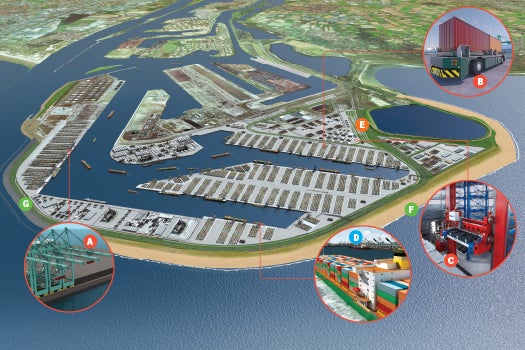 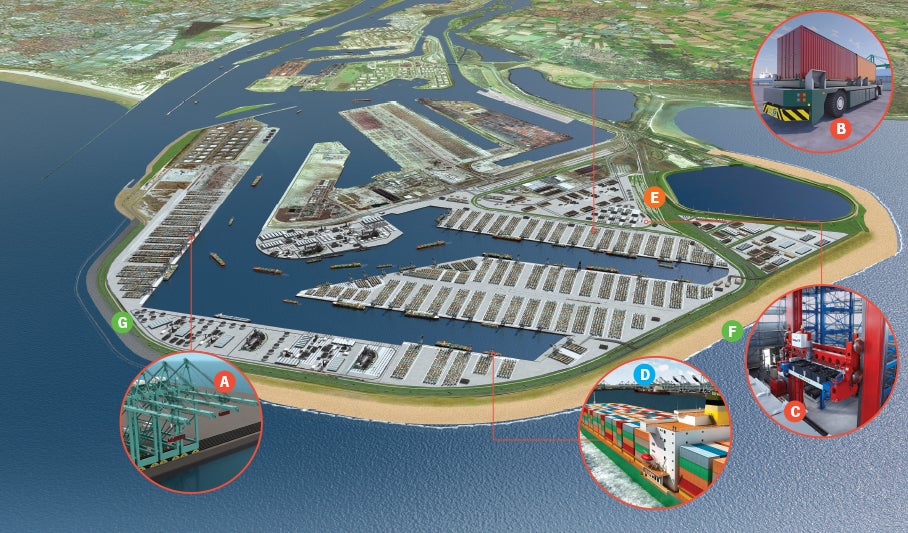 The Most Efficient Cargo Handler

Business is booming at Europe’s largest port, in Rotterdam, the Netherlands, which sees the lion’s share of the continent’s imports and exports. About 34,000 ships and 12 million shipping containers—each large enough to hold 27 refrigerators, 175 bicycles, or 2,500 pairs of jeans—already pass through it each year. But that’s nothing compared with the 32 million containers it will handle by 2035. With no land for expansion, the Port of Rotterdam Authority has approved a $4-billion project to turn four square miles of 66-foot-deep ocean into dry ground for what will likely become the most advanced port in the world, Maasvlakte 2. The new facility will include automated container-moving vehicles powered by 13-ton batteries in place of diesel and a harbor so deep it will accommodate superships that haven’t even been built yet. So far, dredging boats have vacuumed up more than seven billion cubic feet of sand from the ocean to fill in the new site, which will open its first terminal next year. When the entire port is finished, in 2035, it will see enough containers each month to circle half the Earth.

Modern terminals move no more than 30 containers an hour. At Maasvlakte 2, automated equipment will blow past that rate and improve overall efficiency by up to 50 percent. People will control ship-to-shore cranes [A] remotely from an office. Then, automated ground vehicles [B] will grab a container or two and navigate by following transponders in the pavement. Rather than wait in line for a crane to unload its cargo, the vehicles will unload themselves with built-in hydraulic lifts. And instead of polluting and noisy diesel engines, they will run on rechargeable, 13-ton lead-acid batteries. After an eight-hour shift, the vehicles will enter a robotic battery-exchange station [C] to swap for a fresh one.

The world’s largest container ship, the CMA CGM Marco Polo, is larger than an aircraft carrier, and superships [D] of the future will be even bigger. That’s because the more goods crammed onto a vessel, the cheaper the shipping cost per ton. The 16,000-container Marco Polo requires a port at least 53 feet deep. Berths at Maasvlakte 2 will be six feet deeper than that, appropriate for ships that carry 18,000 containers or more.

If the world’s shipping industry were a country, its carbon footprint would be the sixth largest. But this port is pushing for electric container-moving vehicles, cleaner engines on water and land, and harbored ships that use electric shoreside power. The port authority plans to shift goods onto more efficient rail [E] and inland ships to cut container-truck traffic by 25 percent by 2030. Electricity will probably come from windmills and two 1,100-megawatt coal and biomass electric plants that will capture most of their carbon dioxide. The port authority has also launched a large-scale carbon-capture and storage demo program to put 1.2 million tons of CO2 a year in exhausted undersea oilfields.

Manmade beaches and dunes, held in place by wind-resistant marram grass, form a soft seawall [F] on the port’s south and west edges. To protect the northwest side from stronger storms, engineers completed a more expensive hard seawall [G]: sand covered by stone, topped off by 19,558 44-ton concrete blocks—likely the largest concrete blocks in all of Europe. Computer modeling suggests the seawall could withstand waters 18 feet above sea level.