The US flew its most iconic Cold War bomber over Europe

The B-52 sorties traveled from the United Kingdom to Romania and back. Here's why. 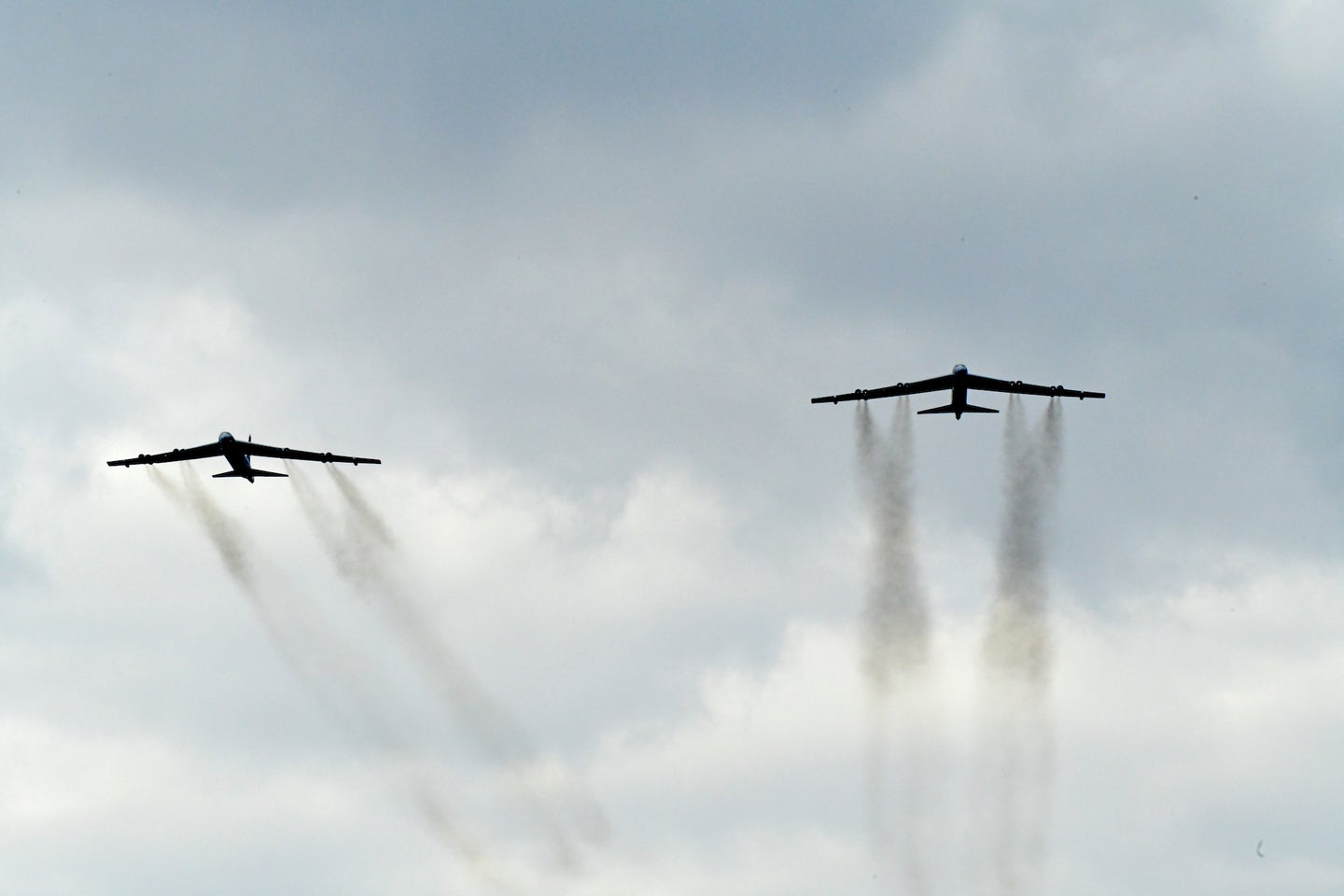 On Friday, March 4, American B-52 bombers flew a patrol from the UK, over Germany to Romania, and back. The bombers stayed within uncontested NATO airspace for the entire route, and the patrol was repeated on Monday, March 7. The sorties were unremarkable in many ways, except this time the flights took place against the shadow of Russia’s war on Ukraine. In light of that war, which the US has adamantly committed to not fighting, what was the most iconic Cold War bomber doing flying over Europe?

Normally, the B-52s of the 5th Bomb Wing are based in Minot, North Dakota. Their March 4 mission, as the Air Force command responsible for Europe and Africa described it, was to conduct “a long range integration flight through Europe connecting with Germany and Romania.”

In that role, the bombers carried out a close air support training exercise, in which they partnered with German Joint Terminal Attack Controllers—soldiers whose job it is to direct airplanes to the targets they are supposed to attack. After training with the German soldiers, the B-52s also conducted close air support training with Romanian forces. Germany and Romania are, along with the United States and 27 other nations, members of NATO, a longstanding defensive military alliance with roots in the Cold War.

The earliest models of the B-52 entered service in 1955, just six years after the creation of NATO. In June 1952, Popular Science wrote about a prototype B-52 with the headline “Eight-Jet Giant Designed to Carry A-Bomb Anywhere in the World.” The B-52 is a successor plane to the longer range B-29 bombers the US used to drop atomic bombs on Japan. Atomic payloads were built into the design from the start. By 1957 Popular Science was referring to the plane as a “hydrogen bomber,” reflecting the change from atomic to thermonuclear warheads in the bombs carried

Bombers were the first means that nations had to attack with nuclear weapons, and for both the United States and Russia, bombs carried by planes remain part of the “nuclear triad,” a term that refers to the US’s three ways of attacking with nuclear weapons. (The other two legs of the triads are ground-launched ICBMs and submarine-launched missiles.) That the B-52 had a starring role in director Stanley Kubrick’s iconic 1964 Cold War atomic apocalypse comedy Dr. Strangelove no doubt contributed to the bomber’s durable image as an annihilation machine. To this day, the United States includes B-52 bombers among its nuclear-capable aircraft.

Two big changes have altered the way B-52s are used today compared to how they were intended at launch. The B-52 is formally called the “Stratofortress,” descending from the B-17 Flying Fortress and the B-29 Superfortress, and to that end it still had a crewed tailgun when it was first delivered, as a way to protect the plane against enemy fighters. The durable threat to bombers instead turned out to be anti-air missiles, capable of tracking and destroying B-52s at distances that made conventional bombing runs unsafe.

To adapt, in recent decades the US Air Force has only used the B-52 for traditional bombing runs against enemies without sophisticated anti-air defenses. Over uncontested airspace, like during the 2001 US invasion of Afghanistan, B-52s were used for carpet bombing, including with cluster bombs as Human Rights Watch alleges.

Against sophisticated anti-air missiles and sensors, which can detect and attack planes hundreds of miles away, the B-52 has been outfitted with long-range cruise missiles. These missiles are mounted in two racks under each wing, with each rack holding three cruise missiles, and an internal 8-missile rotary launch system that fits into the bomb bay. The primary missile carried in this bomb bay is the JASSM-ER, a conventional cruise missile with a range of roughly 1,100 miles.

The B-52 still retains its role as a nuclear-capable plane, but bombing duties are now relegated to B-2 stealth bombers as well as F-15 and F-16 fighters. Should it be outfitted for a nuclear mission, the B-52 would be armed not with nuclear gravity bombs, but with nuclear cruise missiles.

Like with the conventional JASSM-ER, when the B-52 carries the nuclear AGM-86 Air Launched Cruise Missile, it holds six under each wing and eight internally. With a range of 1,500 miles, AGM-86 missiles have the reach to hit targets far away from where the bombers are actually flying.

The Air Force formally acknowledges the storage of these missiles at Minot Air Force Base in North Dakota and Barksdale Air Force Base, Louisiana. The United Kingdom, where the bombers of the 5th Bomb Wing are based, does not house any US nuclear weapons. There are six sites in NATO countries that store US nuclear bombs, but not cruise missiles.

All of this means that the B-52s flying over Europe were not any special nuclear signal being sent to Russia. Instead, the bomber flights are part of the routine machinery of preparation for a war waged directly against NATO, and the signal sent by their flights is one of continued US commitment to use American aircraft to defend NATO members. It is this mission, rehearsal for a live war against Russia in defense of a NATO member state, that B-52 bomber crews have practiced for generations.