Gunshot wound first aid can save a life. Here’s what to do.

There are life-saving measures any bystander can take. 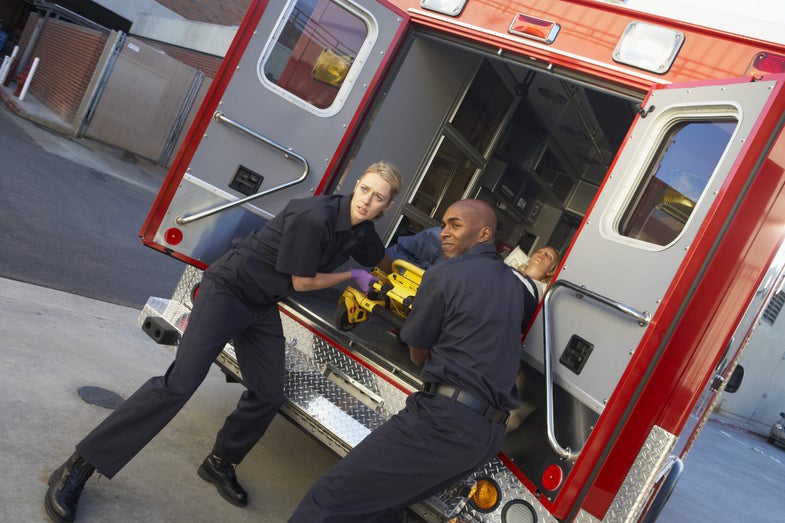 "Someone at the scene is going to have to intervene to save those injured victims. EMS can't get there in time.". DepositPhotos
SHARE

Twelve people died this week after a gunman opened fire in a bar in Thousand Oaks, California. More than 20 others were injured. Two weeks ago, a gunman killed 11 people at the Tree of Life Synagogue in Pittsburg. Mass shootings in public places have become more and more common over the past few decades. There have been 307 mass shootings in the United States so far in 2018.

At the scene of a mass shooting, the primary focus of law enforcement is identifying and capturing the shooter. When the area is sufficiently secured, through, attention shifts to the victims, and getting them the medical care that they need. Emergency medical services, hospital nurses and doctors, civilians nearby, and even those affected by the event play a role in keeping people alive.

How bystanders can help save gunshot victims

After the mass shooting at Sandy Hook Elementary school in 2012, the American College of Surgeons formed the Joint Committee to Create a National Policy to Enhance Survivability from Intentional Mass Casualty and Active Shooter Events, with the goal of developing policies and programs that would keep more people alive during mass shooting incidents. They created the “Stop the Bleed” campaign to help civilians learn to control bleeding—victims of a trauma or gunshot most often die from blood loss, rather than the injury itself.

“Someone can bleed to death in five to eight minutes,” says Jeffrey Kerby, a surgeon at University of Alabama at Birmingham who’s involved in the Stop the Bleed campaign. “Someone at the scene is going to have to intervene to save those injured victims. EMS can’t get there in time.”

People nearby should first secure their own safety, and then be sure law enforcement and first responders have been alerted. Then, they can help victims of the shooting by looking for the source of any blood—opening or removing clothing if necessary.

Life-threatening bleeding that requires care includes blood that’s pooling on the ground or spurting from a wound, loss or partial loss of a limb, or bleeding from someone who is unconscious. There are a few techniques to stop the bleeding, and all involve applying pressure to the wound.

If there aren’t any supplies available, cover the wound with a cloth (a shirt, a scarf, anything around), press down hard with both hands, and keep pressing. If the injury is particularly deep, press the cloth into it to pack the wound.

If a trauma kit is available and the injury is on a limb, pull a tourniquet tight around the person’s arm or leg above the wound. Contrary to some popular ideas, Kerby says, a tourniquet doesn’t mean that a person is going to need an amputation—if a tourniquet is on for under two hours, the limb will probably be fine. “We have to break down those myths,” he says. “You’re not hurting the patient, you’re saving their life. Life over limb.”

Pressing on a wound or pulling a tourniquet tight will be painful for the person with the wound, Kerby says. “Just because the person you’re trying to help is experiencing discomfort doesn’t mean you’re doing it wrong,” he says. “You’re doing the right thing.”

Kerby says that one of the main goals of the Stop the Bleed campaign is to empower people to help in any situation where there’s a major injury. “People don’t feel like they can help, so they don’t, which is certainly understandable,” he says.

First responders and police officers who had Stop the Bleed training and carried tourniquets saved at least three lives after the shooting at the Tree of Life Synagogue, Pittsburgh trauma surgeon Matthew D. Neal wrote in an op-ed.

In addition to managing bleeding, people can identify first responders and ask the experts what they can do, says Lesley Osborn, an emergency medicine specialist with McGovern Medical School at UTHealth in Houston. Bystanders might be asked to watch those with minor injuries to make sure they don’t get worse and help keep them calm. “During these kinds of things, people are willing to help,” she says. “When you look at these events, bystanders are some of the biggest assets.”

How emergency medical response teams and hospitals handle the crisis

Emergency medical services, when they arrive, start by triaging: sorting gunshot victims by the urgency of their injuries and getting them to treatment as quickly as possible.

There are a few detailed systems for triaging people after a mass casualty incident—START (Simple triage and rapid treatment) is the most commonly taught in the United States, and SALT (Sort, Assess, Lifesaving Interventions, Treatment/Transport) is often used, as well. “They’re all similar, and each physician would have an opinion about which they like,” Osborn says.

They all follow the same basic structure: determine which people aren’t going to survive, which have the worst injuries that need immediate attention and should go to the hospital first, and which people have injuries that are less serious.

“Your initial procedure, if people are listening, is to say ‘if you can hear my voice, walk towards me,” Osborn says. That tells medical services if you have a normal enough medical status to understand what’s being said, and good enough vital signs to walk. “Those people are probably the least critical, at least for the time.”

Depending on the system, patients are then sorted based on things like the type of wound they have, or their heart rate and respiratory status. Triage systems use tags to identify patients based on the severity of their injuries and to track their vital signs or other information.

Despite the training and planning, the specifics of the various systems of triage—the minutia of which serious gunshot victim is slightly more at risk than another—often aren’t followed to the letter.

“We all plan with one of these triage methods in mind, but then, you get to an event and it goes out the window,” Osborn says. “It turns into just getting the sickest patients away from the area that’s the most dangerous and to the hospital first.”

Hospitals use similar triaging systems to sort patients once they arrive and determine which people need immediate attention from doctors and surgeons. The added challenge at hospitals, Osborn says, is that they often don’t know which patients are going to be arriving, and when. Hospitals get updates from ambulances, but after a mass shooting incident, people often arrive at the emergency room in the backs of police cars and other vehicles.

Emergency medical services, first responders and hospitals are getting better at treating victims of mass shootings. Organizations have plans in place for what they’ll do when a mass shooting happens in their areas, and Stop the Bleed courses are offered for a low-cost or for free around the country.

“We want to make it as commonplace as CPR,” Kerby says. “It’s unfortunate that we have to do this. We don’t have to accept what’s going on, but we have to be prepared for it.”

Hospitals and teams of first responders can also learn from the experience of doctors in places where shootings already occurred: the staff at UPMC Presbyterian, the hospital that treated the victims of the attack on the Pittsburgh synagogue, said they’d refined their plans and procedures after hearing from surgeons who worked at the Orlando and Las Vegas shootings.